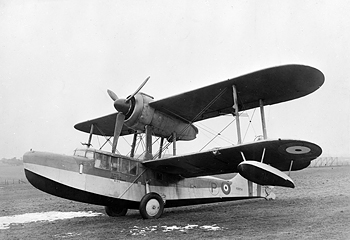 caption = Prototype of Sea Otter
designer =
first flight = 1938
introduced =
retired =
status =
primary user =
more users =
produced = 1942–1945
number built = 292
unit cost =
developed from=
variants with their own articles =The Supermarine Sea Otter was a British flying boat designed and built by . It was a longer range development of the Walrus and was the last to be designed by Supermarine. It was also the last biplane to enter service with the .

The main difference between the Walrus and the Sea Otter was in the mounting of the power plant. The Walrus had a rear-facing engine with a . The Sea Otter's engine faced forward with the normal .

There was considerable development of the power plant/propeller combination during the design of the Sea Otter, which at its concept was called the "Stingray". The original test aircraft had a XI engine with a two-bladed propeller. This gave insufficient thrust so a two-position three blade was tried. This was changed again to a four-blade with the pairs of blades set at an angle of 35°, instead of the usual 90°.The first flight took place on 1938, but it was not until January 1942 that the placed a production order. Due to cooling troubles found with the Perseus, the power plant was changed for production aircraft to the XXX engine driving a three-bladed airscrew. The Sea Otter was used by both the and the for () and patrol roles.

Of the 592 aircraft ordered, only 292 were built due to the end of the . Eight aircraft were brought for the , and another eight were supplied to the Dutch Naval Air Arm. The colonial service of France purchased six Sea Otters for use in .