Charles Bennet, 4th Earl of Tankerville (15 November 1743 – 10 December 1822), styled Lord Ossulston from 1753 to 1767, was a British nobleman, a collector of shells[2] and a famous patron of Surrey cricket in the 1770s. He agreed a set of cricket rules that included the first mention of the Leg before wicket rule.[3] His wife, Emma, was also notable as a collector of exotic plants. Her collection of over 600 illustrations were purchased by Kew Gardens in 1932 and are still available today.[4]

Tankerville was born in 1743 and was educated at Eton College between 1753 and 1760. Having succeeded to the Earldom on the death of his father on 27 October 1767 he married Emma, daughter of Sir James Colebrooke, 1st Baronet, in 1771 and settled at Walton on Thames at his house, Mount Felix overlooking the Thames.[5] 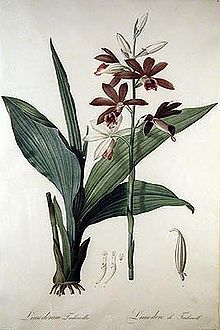 Lady Tankerville amassed a large collection of exotic plants at Mount Felix.[6] Emma Tankervilles collection was thought to be the largest in the London area. Specimens named after Lady Tankerville include the Nun's Orchid or Phaius tankervilleae.[7] Artists were employed to create botanical drawings on vellum of the specimens.[6]

Tankerville often played cricket and seems to have been a very good fielder, though he was not especially noted for batting or bowling. He was the employer of Edward "Lumpy" Stevens, who was a gardener at Tankerville's Walton-on-Thames estate; and William Bedster, who was his butler. It was the accuracy of "Lumpy" Stevens that led to the introduction of a middle stump. Prior to 1776 there were only two stumps and Lumpy's deliveries could go through the hole. A permanent memorial to Lumpy Stevens has been proposed.[8]

In 1774, Tankerville sat on the committee that formulated some early laws of cricket. They were settled and revised at the Star and Garter in Pall Mall on Friday 25 February 1774. The meeting was chaired by Sir William Draper and the committee included the Duke of Dorset, Harry Peckham and other "Noblemen and Gentlemen of Kent, Hampshire, Surrey, Sussex, Middlesex, and London".[9] This meeting was one of the earlier sets of cricket rules and is acknowledged as being the first where the Leg before wicket rule was introduced.[3]

Tankerville continued in his interest in cricket with Chertsey and Surrey Cricket club until 1781 when he retired from the sport and went into politics.[10] He was appointed joint postmaster general and a privy councillor in 1782, but he resigned his office in April 1783. However Tankerville was again appointed under Mr Pitt's administration in January 1784. He died on the 10 December 1822 and was succeeded by his eldest son Charles Augustus.[5]

Tankerville's other interests included maps and shells. At the end of his life his collection was sold for an undisclosed sum, but thought to be between three and four thousand pounds.[2] There are a number of flowers, shells and gastropods with the Latin name tankervillii. The gastropod named Ancilla tankervillii (Swainson, 1825) is probably named for Tankerville (or less probably his son).[11]

Tankerville married Emma Colebooke on the 7 October 1771 in Gatton, Surrey.[1] She was co-heir to her father Sir John Coleborrke. His wife's collection of botanical illustrations are still held at the Royal Botanical gardens, an orchid is named in her honour and the gardens at Mount Felix were well regarded many years after her death.

The Hon Henry Grey Bennet, their second son, became the member of parliament for Shrewsbury in 1806 whilst their third son, The Hon John Astley Bennet, became a captain in the Navy but died in September 1812. The 5th Earl, Charles Augustus, who was born on 28 April 1776 was treasurer of the household during the short administration of Mr Fox in 1806. Their daughter Corisande Emma Bennett married James Harris, 3rd Earl of Malmesbury on 13 April 1830.[5]