A frame story (also frame tale, frame narrative, etc.) is a literary technique and a type of story within a story, whereby an introductory or main narrative is presented, at least in part, for the purpose of setting the stage either for a more emphasized second narrative or for a set of shorter stories. The frame story leads readers from a first story into another, smaller one (or several ones) within it. 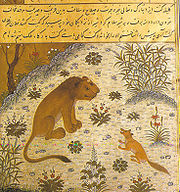 A page from Kelileh va Demneh dated 1429, from Herat, a Persian translation of the Panchatantra — depicts the manipulative jackal-vizier, Dimna, trying to lead his lion-king into war.

The earliest known frame stories can be traced back to ancient India sometime in the first millennium BCE, when the Sanskrit epics Mahabharata and Ramayana, Vishnu Sarma's Panchatantra, Syntipas' The Seven Wise Masters, and the fable collections Hitopadesha and Vikram and The Vampire were written.[1] This form gradually spread west through the centuries and became popular, giving rise to such classic frame tale collections as the One Thousand and One Nights (Arabian Nights), The Decameron, and Canterbury Tales. This format had flexibility in that various narrators could retain the stories they liked or understood, while dropping ones they didn't and adding new ones they heard from other places. This occurred particularly with One Thousand and One Nights, where different versions over the centuries have included different stories.

The use of a frame story in which a single narrative is set in the context of the telling of a story is also a technique with a long history, dating back at least to the beginning section of the Odyssey, in which the narrator Odysseus tells of his wandering in the court of King Alcinous.

A set of stories

This literary device acts as a convenient conceit for the organization of a set of smaller narratives which are either of the devising of the author, or taken from a previous stock of popular tales slightly altered by the author for the purpose of the longer narrative. Sometimes a story within the main narrative can be used to sum up or encapsulate some aspect of the framing story, in which case it is referred to in literary criticism by the French term mise en abyme.

An extensive use of this device is Ovid's Metamorphoses where the stories nest several deep, to allow the inclusion of many different tales in one work. Emily Brontë's Wuthering Heights uses this literary device to tell the story of Heathcliff and Catherine, along with the subplots.

Frame stories are often organized as a gathering of people in one place for the exchange of stories. Each character tells his or her tale, and the frame tale progresses in that manner. Historically famous frame stories include Chaucer's Canterbury Tales, about a group of pilgrims who tell stories on their journey to Canterbury; and Boccaccio's Decameron about a group of young aristocrats escaping the Black Death to the countryside and spending the time telling stories.

The Return of Rip Van Winkle, painting by John Quidor, 1849

Sometimes only one storyteller exists, and in this case there might be different levels of distance between the reader and author. In this mode, the frame tale can become more fuzzy. In the case of Washington Irving's Sketch Book, which contains "The Legend of Sleepy Hollow" and "Rip Van Winkle" among others, the conceit is that the author of the book is not Irving, but a certain gentleman named Crayon. Here the frame includes both the world of the imagined Crayon, his stories, and the possible reader who is assumed to play along and "know" who Crayon is.

Donald Westlake's short story "No Story" is a parody of frame stories, in which a series of narrators start to tell stories, each of which contains a narrator who starts to tell a story, culminating in a narrator who announces that there will be no story. Essentially, it is a frame story without a story to be framed.

When there is a single story, the frame story is used for other purposes – chiefly to position the reader's attitude toward the tale. One common one is to draw attention to the narrator's unreliability. By explicitly making the narrator a character within the frame story, the writer distances himself from the narrator; he may also characterize the narrator to cast doubt on his truthfulness. In P. G. Wodehouse's stories of Mr Mulliner, Mulliner is made a fisherman in order to cast doubt on the outrageous stories he tells. The movie Amadeus is framed as a story an old Antonio Salieri tells to a young priest, because the movie is based more on stories Salieri told about Mozart than on historical fact.

Another use is a form of procatalepsis, where the writer puts the readers' possible reactions to the story in the characters listening to it. In The Princess Bride the frame of a grandfather reading the story to his reluctant grandson puts the cynical reaction a viewer might have to the romantic fairytale into the story in the grandson's persona, and helps defuse it. This is the use when the frame tells a story that lacks a strong narrative hook in its opening; the narrator can engage the reader's interest by telling the story to answer the curiosity of his listeners, or by warning them that the story began in an ordinary seeming way, but they must follow it to understand later actions, thereby identifying the reader's wondering whether the story is worth reading to the listeners'.

A specialized form of the frame is a dream vision, where the narrator claims to have gone to sleep, dreamed the events of the story, and then awoken to tell the tale. In medieval Europe, this was a common device, used to indicate that the events included are fictional; Geoffrey Chaucer used it in The Book of the Duchess, The House of Fame, Parlement of Foules, and The Legend of Good Women (the last also containing a multi-story frame story within the dream). In modern usage, it is sometimes used in works of fantasy as a means toward suspension of disbelief about the marvels depicted in the story. J.R.R. Tolkien, in his essay "On Fairy-Stories" complained of such devices as unwillingness to treat the genre seriously. Alice's Adventures in Wonderland includes such a frame, but unlike most usages, the story itself uses dream-like logic and sequences; most dream frames frame stories that appear exactly as if occurring in real life.

Still, even when the story proceeds realistically, the dream frame casts doubt on the events. In the book, The Wonderful Wizard of Oz, the events really occur; the dream frame added for the movie detracts from the validity of the fantasy.[2]

Use of frame stories

As with all literary conceits, the frame tale has many variations, some clearly within the confines of the conceit, some on the border, and some pushing the boundaries of understanding. The main goal of a frame tale is as a conceit which can adequately collect otherwise disparate tales. It has been mostly replaced, in modern literature, by the short story collection or anthology absent of any authorial conceit.

To be a frame narrative, the story must act primarily as an occasion for the telling of other stories. If the framing narrative has primary or equal interest, then it is not usually a frame narrative. For example, Odysseus narrates much of the Odyssey to the Phaeacians, but, even though this recollection forms a great part of the poem, the events after and before the interpolated recollection are of greater interest than the memory.

Another notable example that plays with frame narrative is the 1994 film Forrest Gump. Most of the film is narrated by Forrest to various companions on the park bench. However, in the last fifth or so of the film, Forrest gets up and leaves the bench, and we follow him as he meets with Jenny and her son. This final segment suddenly has no narrator unlike the rest of the film that came before it, but is instead told through Forrest and Jenny's dialogues.

This approach is also demonstrated in the 2008 film Slumdog Millionaire (adapted from the 2005 novel Q & A), about a poor street kid Jamal coming close to winning Kaun Banega Crorepati (the Indian version of Who Wants to Be a Millionaire?) and then being suspected of cheating. Most of the story is narrated at a police station by Jamal, who narrates how he knew the answers to the questions as the show is played back on video. The show itself then serves as another framing device, as Jamal sees flashbacks of his past as each question is asked. The last portion of the film then unfolds without any narrator.

Joseph Conrad's Heart of Darkness demonstrates a narrator telling a story, while the protagonist is quoted so as to give the framed appearance that he is telling the story. The narrator provides the transition to the one speaking the story.

A famous literary example is Emily Brontë's Wuthering Heights, whereby we learn events through a visitor to the house of the title, who in turn has been told these events by the housekeeper of the Linton family. None of the main characters ever directly narrates.

Frame stories are found in many role-playing video games, such as the early Dragon Quest IV, released in 1990. This literary device can also be sparingly used to achieve secondary ends. For instance, the Shining Force series of role playing games use narrators within frame stories to implement things like starting, saving and exiting the game without breaking the fourth wall entirely, or rather by constructing a second fourth wall to shield the player from having to suspend his/her disbelief as much.