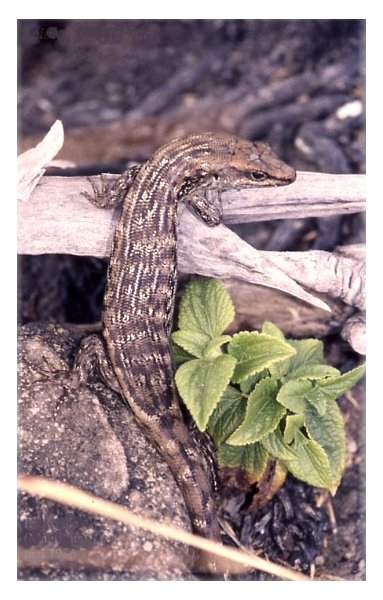 The Round Island skink or Telfair's skink ("Leiolopisma telfairii"), is a species of endemic to . Other members of the genus occur on and but the Round Island skink is closely related to the two , "L. mauritiana" from Mauritius and "L. ceciliae" from . It is named after , the founder of the .

It reaches a length between 30 and 40 cm. The body is general brownish grey mottled with dark brown spots. The small scales exhibit a rainbow-coloured shimmer when the sunlight is reflected on them. The body is approximately cylinder-shaped. It can cast its relatively long tail during a fight or to escape capture; the tail is regenerated after a while. Their short but vigorous legs are used to dig burrows.

Its omnivorous diet consists of seeds, fruits, insects and small lizards. 'Cannibalism' is not unknown and the skinks may even kill their own young to eat them.

This species was once numerous on Mauritius and offshore islands like Flat Island. Due to habitat destruction and introduced species like goats, black rats and rabbits it was only confined to Round Island since the mid of the 19th century. When visited Round Island in the 1970s, 5000 specimens were recorded as surviving. He brought some specimens to the to build up a captive breeding program. Thanks to the eradication of the goats and rabbits on Round Island the increasing of the Round Island skink population was so successful that it was possible to relocate them to other islands like Gunner's Quoin and the Ile aux Aigrettes.