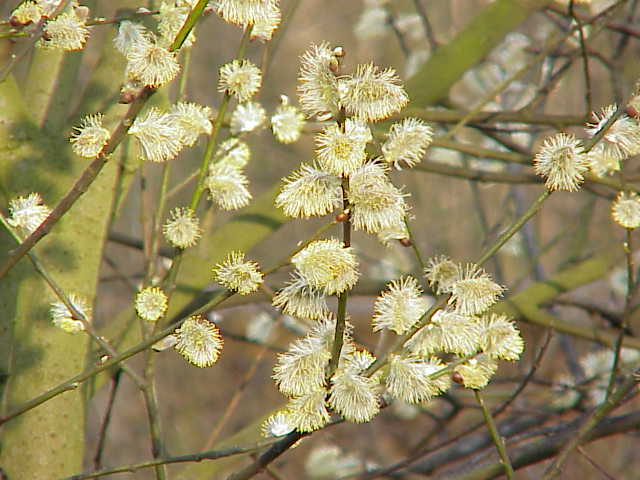 "Salix caprea" (Goat Willow, also known as the Pussy Willow or Great Sallow), is a common species of native to and western and central .

It is a or small , reaching a height of 6-12 m, rarely to 20 m. The leaves are 3-12 cm long and from 2-8 cm wide, broader than most other willows. The s are soft silky, silvery 3-7 cm long s, produced in early spring before the new leaves appear; the male and female catkins are on different plants (dioecious). The male catkins mature yellow at release, the female catkins maturing pale green. The is a small capsule 5-10 mm long containing numerous minute s embedded in fine cottony hairs. The seeds are very small (about 0.2 mm) with the fine hairs aiding dispersal; they require bare to germinate.

There are two varieties:

The scientific name, and the common name Goat Willow, probably derive from the first known illustration of the species in 's 1546 , where the plant is shown being browsed by a . The species was historically also widely used as a browse for goats, to which Bock's illustration may refer.

"Salix caprea" occurs both in wet environments, such as riverbanks and lake shores, and in drier sites, wherever bare soil becomes available due to ground disturbance.

Unlike almost all other willows, pure specimens of "Salix caprea" do not take root readily from cuttings; if a willow resembling the species does root easily, it is probably a hybrid with another species of willow.

The leaves are used as a food resource by several species of Lepidoptera, and are also commonly eaten by browsing s.

A small number of s have been selected for garden use. The most common is "S. caprea" 'Kilmarnock', with stiffly pendulous shoots, forming a mop-head; it is a male clone. A similar female clone is "S. caprea" 'Weeping Sally'. As they do not root from cuttings, they are grafted on erect stems of other willows; the height of these cultivars is determined by the height at which the graft is made.

Both and can be extracted from Goat Willow bark. The tree is not considered a good source of as its wood is both brittle and known to crackle violently if burned.

As with the closely related "" (American Pussy Willow), it is also often grown for cut flowers. See for further cultural information and uses, which apply to both species.