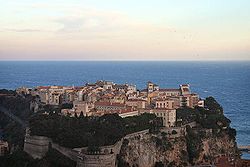 Monaco-Ville (also known locally as French: Le Rocher or English: The Rock) is one of Monaco's administrative divisions located on a rocky headland that extends into the Mediterranean Sea. It is one of the four traditional quarters (French: quartiers) of Monaco, the others being La Condamine, Monte Carlo, and Fontvieille. However, in modern administrative terms it is one of ten wards (see navigation box below for a complete list). Therefore, Monaco-Ville is neither a town nor the capital of Monaco for which Monaco-Ville is erroneously taken by some people.[1]

Monaco-Ville was originally called Monoikos, after the temple of Hercules Monoikos, which presumably was located in the nearby colony established by Phocaean Greeks in the 6th century BC. During its history, Monoikos passed hands a number of times. It became known as Monaco in the Middle Ages when a fortress was built on the Rock in the 13th century and later a fortified town. Some of the city walls still remain.

In 1297 the Rock was seized by François Grimaldi, a member of the Grimaldi family, which ruled Monaco since then with some brief interruptions. The Grimaldis made the old fortress their residence. Overtime the fortress evolved into the Palais Princier, which is now the official residence of Albert II, Prince of Monaco.

Despite being located in the middle of the City of Monaco, the world's most densely populated urban center, Monaco-Ville remains a medieval village at heart, made up almost entirely of quiet pedestrian streets and marked by virtual silence after sundown. Though innumerable people visit Monaco-Ville and the palace square, only local vehicles are allowed up to the Rock, and gasoline-powered motorcycles are prohibited after 10 pm.