Cell biology
Not to be confused with Cell (biology).
"Cell research" redirects here. For the journal, see Cell Research (journal).

Cell biology (formerly cytology, from the Greek kytos, "contain") is a scientific discipline that studies cells – their physiological properties, their structure, the organelles they contain, interactions with their environment, their life cycle, division and death. This is done both on a microscopic and molecular level. Cell biology research encompasses both the great diversity of single-celled organisms like bacteria and protozoa, as well as the many specialized cells in multicellular organisms such as humans.

Knowing the components of cells and how cells work is fundamental to all biological sciences. Appreciating the similarities and differences between cell types is particularly important to the fields of cell and molecular biology as well as to biomedical fields such as cancer research and developmental biology. These fundamental similarities and differences provide a unifying theme, sometimes allowing the principles learned from studying one cell type to be extrapolated and generalized to other cell types. Therefore, research in cell biology is closely related to genetics, biochemistry, molecular biology, immunology, and developmental biology. 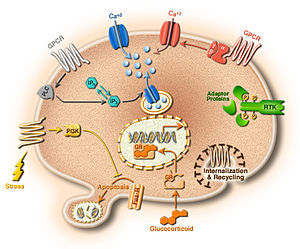 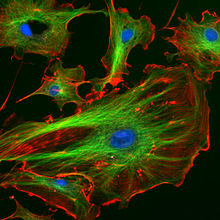 Endothelial cells under the microscope. Nuclei are stained blue with DAPI, microtubles are marked green by an antibody and actin filaments are labelled red with phalloidin.

Each type of protein is usually sent to a particular part of the cell. An important part of cell biology is the investigation of molecular mechanisms by which proteins are moved to different places inside cells or secreted from cells.

Most proteins are synthesized by ribosomes in the rough endoplasmic reticulum. This process is known as protein biosynthesis. Biosynthesis (also called biogenesis) is an enzyme-catalyzed process in cells of living organisms by which substrates are converted to more complex products (also simply known as protein translation). Some proteins, such as those to be incorporated in membranes (known as membrane proteins), are transported into the "rough" endoplasmic reticulum (ER) during synthesis. This process can be followed by transportation and processing in the Golgi apparatus. From the Golgi, membrane proteins can move to the plasma membrane, to other sub-cellular compartments, or they can be secreted from the cell. The ER and Golgi can be thought of as the "membrane protein synthesis compartment" and the "membrane protein processing compartment", respectively. There is a semi-constant flux of proteins through these compartments. ER and Golgi-resident proteins associate with other proteins but remain in their respective compartments. Other proteins "flow" through the ER and Golgi to the plasma membrane. Motor proteins transport membrane protein-containing vesicles along cytoskeletal tracks to distant parts of cells such as axon terminals.

Extracellular and cell surface proteins destined to be degraded can move back into intracellular compartments upon being incorporated into endocytosed vesicles some of which fuse with lysosomes where the proteins are broken down to their individual amino acids. The degradation of some membrane proteins begins while still at the cell surface when they are separated by secretases. Proteins that function in the cytoplasm are often degraded by proteasomes.

Purification of cells and their parts Purification may be performed using the following methods: