The GPRS core network is the central part of the General Packet Radio Service which allows 2G, 3G and WCDMA mobile networks to transmit IP packets to external networks such as the Internet. The GPRS system is an integrated part of the GSM network switching subsystem. 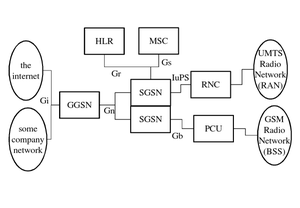 The GPRS core network provides mobility management, session management and transport for Internet Protocol packet services in GSM and WCDMA networks. The core network also provides support for other additional functions such as billing and lawful interception. It was also proposed, at one stage, to support packet radio services in the US D-AMPS TDMA system, however, in practice, all of these networks have been converted to GSM so this option has become irrelevant.

Like GSM in general, GPRS module is an open standards driven system. The standardization body is the 3GPP.

GTP-U
for transfer of user data in separated tunnels for each Packet Data Protocol (PDP) context
GTP-C
for control reasons including:
GTP'
for transfer of charging data from GSNs to the charging function.

GGSNs and SGSNs (collectively known as GSNs) listen for GTP-C messages on UDP port 2123 and for GTP-U messages on port 2152. This communication is direct within a single network, or in the case of international roaming, via a GPRS roaming exchange (GRX).

The Charging Gateway Function (CGF) listens to GTP' messages sent from the GSNs on TCP or UDP port 3386. The core network sends charging information to the CGF, typically including PDP context activation times and the quantity of data which the end user has transferred. However, this communication which occurs within one network is less standardized and may, depending on the vendor and configuration options, use proprietary encoding or even an entirely proprietary system.

A GSN is a network node which supports the use of GPRS in the GSM core network. All GSNs should have a Gn interface and support the GPRS tunneling protocol. There are two key variants of the GSN, namely Gateway and Serving GPRS Support Node.

The Gateway GPRS Support Node (GGSN) is a main component of the GPRS network. The GGSN is responsible for the interworking between the GPRS network and external packet switched networks, like the Internet and X.25 networks.

From an external network's point of view, the GGSN is a router to a sub-network, because the GGSN ‘hides’ the GPRS infrastructure from the external network. When the GGSN receives data addressed to a specific user, it checks if the user is active. If it is, the GGSN forwards the data to the SGSN serving the mobile user, but if the mobile user is inactive, the data is discarded. On the other hand, mobile-originated packets are routed to the right network by the GGSN.

The GGSN is the anchor point that enables the mobility of the user terminal in the GPRS/UMTS networks. In essence, it carries out the role in GPRS equivalent to the Home Agent in Mobile IP. It maintains routing necessary to tunnel the Protocol Data Units (PDUs) to the SGSN that services a particular MS (Mobile Station).

The GGSN converts the GPRS packets coming from the SGSN into the appropriate packet data protocol (PDP) format (e.g., IP or X.25) and sends them out on the corresponding packet data network. In the other direction, PDP addresses of incoming data packets are converted to the GSM address of the destination user. The readdressed packets are sent to the responsible SGSN. For this purpose, the GGSN stores the current SGSN address of the user and his or her profile in its location register. The GGSN is responsible for IP address assignment and is the default router for the connected user equipment (UE). The GGSN also performs authentication and charging functions.

A Serving GPRS Support Node (SGSN) is responsible for the delivery of data packets from and to the mobile stations within its geographical service area. Its tasks include packet routing and transfer, mobility management (attach/detach and location management), logical link management, and authentication and charging functions. The location register of the SGSN stores location information (e.g., current cell, current VLR) and user profiles (e.g., IMSI, address(es) used in the packet data network) of all GPRS users registered with this SGSN....

These differences in functionality have led some manufacturers to create specialist SGSNs for each of WCDMA and GSM which do not support the other networks, whilst other manufacturers have succeeded in creating both together, but with a performance cost due to the compromises required.

When a GPRS mobile phone sets up a PDP context, the access point is selected. At this point an access point name (APN) is determined

This access point is then used in a DNS query to a private DNS network. This process (called APN resolution) finally gives the IP address of the GGSN which should serve the access point. At this point a PDP context can be activated.

The Tunnel Endpoint ID (TEID) is a number allocated by the GSN which identifies the tunnelled data related to a particular PDP context.

Several PDP contexts may use the same IP address. The Secondary PDP Context Activation procedure may be used to activate a PDP context while reusing the PDP address and other PDP context information from an already active PDP context, but with a different QoS profile.[1] Note that the procedure is called secondary, not the resulting PDP contexts that have no such relationship with the one the PDP address of which they reused.

A total of 11 PDP contexts (with any combination of primary and secondary) can co-exist. NSAPI are used to differentiate the different PDP context.

Interfaces in the GPRS network