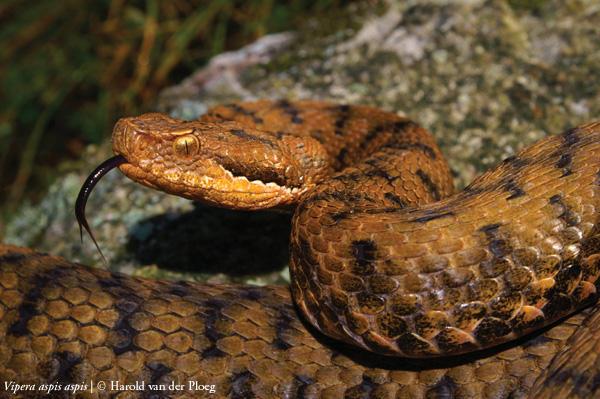 The Viperidae are a family of s commonly referred to as vipers, although the term viperids is more specific and distinguishes them from the viperines (subfamily ""). These snakes are found all over the world, except in and . All have relatively long hinged fangs that permit deep penetration and injection of . Four subfamilies are currently recognized.

All viperids have a pair of relatively long solenoglyphous (hollow) fangs, that are used to inject from glands located towards the rear of the upper jaws. Each of the two fangs is at the front of the mouth on a short bone that can rotate back and forth. When not in use, the fangs fold back against the roof of the mouth and are enclosed in a membranous sheath. The left and right fangs can be rotated together or independently. During a strike, the mouth can open nearly 180° and the rotates forward, erecting the fangs as late as possible so as the fangs do not become damaged. The jaws close on impact and powerful muscles that surround the venom glands contract to inject the venom as the fangs penetrate. This action is very fast; in defensive strikes it can be more a stab than a bite. Viperids use this mechanism primarily for immobilization and digestion of prey. Secondarily it is used for self-defense. Although in most cases with non prey items such as humans they are more likely to give a dry bite (not inject any venom).

Almost all vipers have , a stocky build with a short tail, and, due to the location of the venom glands, a triangular-shaped head distinct from the neck. Their eyes have vertically elliptical, or slit-shaped, s that can open wide to cover most of the eye or close almost completely, which helps them to see in a wide range of light levels. Typically, vipers are nocturnal and ambush their prey.

Compared to many other snakes, vipers often appear rather sluggish. Most are ovoviviparous, giving birth to live young, but a few lay eggs; the word "viper" is derived from Latin "vivo" = "I live" and "pario" = "I give birth".

Experiments have shown that these snakes are capable of making decisions on how much venom to inject depending on the circumstances. In all cases, the most important determinant of venom expenditure is generally the size of the snake, with larger specimens being capable of delivering much more venom. Also, the species is important (some are likely to inject more than others), as well as how much venom is available, the accuracy of the strike, and the number of bites already delivered in a short space of time. In predatory bites, factors that influence the amount of venom injected include the size of the prey, the species of prey, and whether the prey item is held or released. The need to label prey for chemosensory relocation after a bite and release may also play a role. In defensive bites, the amount of venom injected may be determined by the size or species of the predator (or antagonist), as well as the assessed level of threat, although larger assailants and higher threat levels may not necessarily lead to larger amounts of venom being injected.

Viperid venoms typically contain an abundance of -degrading enzymes, called s, that produce symptoms such as pain, strong local swelling and necrosis, blood loss from cardiovascular damage complicated by , and disruption of the blood clotting system. Death is usually caused by collapse in blood pressure. This is in contrast to venoms that generally contain s that disable muscle contraction and cause paralysis. Death from elapid bites usually results from asphyxiation because the diaphragm can no longer contract. However, this rule does not always apply: some elapid bites include symptoms typical of viperid bites, while some viperid bites produce neurotoxic symptoms.

Proteolytic venom is also dual-purpose: it is used for defense and to immobilize prey, as with neurotoxic venoms, and also many of the enzymes have a digestive function, breaking down molecules in prey items, such as s, s, and proteins. This is important, as many vipers have weak digestive systems.

Due to the nature of proteolytic venom, a viperid bite is often a very painful experience and should always be taken seriously, even though it is not necessarily fatal. Even with prompt and proper treatment, a bite can still result in a permanent scar, and in the worst cases the affected limb may even have to be amputated. A victim's fate is impossible to predict as this depends on many factors, including (but not limited to) the species and size of the snake involved, how much venom was injected (if any), and the size and condition of the patient before being bitten. The patient may also be allergic to the venom and/or the .

That Viperidae is attributed to Oppel (1811), as opposed to Laurenti (1768) or Gray (1825), is subject to some interpretation. However, the consensus among leading experts is that Laurenti used "viperae" as the of "vipera" (Latin for "viper", "adder", or "snake") and did not intend for it to indicate a family group taxon. Rather, it is attributed to Oppel, based on his Viperini as a distinct family group name, despite the fact that Gray was the first to use the form Viperinae.