John 'Jack' Simpson Kirkpatrick (6 July 1892 – 19 May 1915), who served under the name John Simpson, was a stretcher bearer with the Australian and New Zealand Army Corps (ANZAC) during the Gallipoli Campaign in World War I. After landing at Anzac Cove on 25 April 1915, he obtained a donkey and began carrying wounded British Empire soldiers from the frontline to the beach, for evacuation. He continued this work for three and a half weeks, often under fire, until he was killed. Simpson and his Donkey are a key part of the 'Anzac legend.'

Simpson was born on 6 July 1892 in South Shields, United Kingdom,[1][2] the son of Robert Kirkpatrick and Sarah Simpson Kirkpatrick.[3] He was one of eight children, and worked with donkeys during summer holidays as a youth.[1]

After deserting from the merchant navy and travelling around Australia, prior to the war, Simpson apparently enlisted as a means to return to England.[2] One account alleges that he dropped "Kirkpatrick" from his name and enlisted as "John Simpson" to avoid being identified as a deserter.[1] He was accepted into the army as a field ambulance stretcher bearer on 23 August 1914 in Perth.[1] This role was only given to physically strong men.[1]

Simpson landed on the shores of the Gallipoli Peninsula on 25 April 1915 as part of the ANZAC forces.[1] In the early hours of the following day, as he was bearing a wounded comrade on his shoulders, he spotted a donkey and quickly began making use of it to bear his fellow soldiers.[1] He would sing and whistle, seeming to ignore the deadly bullets flying through the air, while he tended to his comrades.[1] The donkey came to be named Duffy.[4]

Colonel (later General) John Monash wrote: "Private Simpson and his little beast earned the admiration of everyone at the upper end of the valley. They worked all day and night throughout the whole period since the landing, and the help rendered to the wounded was invaluable. Simpson knew no fear and moved unconcernedly amid shrapnel and rifle fire, steadily carrying out his self imposed task day by day, and he frequently earned the applause of the personnel for his many fearless rescues of wounded men from areas subject to rifle and shrapnel fire."[1]

On 19 May 1915, Simpson was struck by machine gun fire and died.[1] At the time of his death, Simpson's father was already dead, but his mother was still living in South Shields, England.[3] 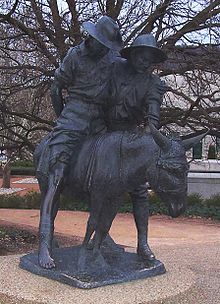 A commemorative statue of Simpson and Duffy

The "Simpson" legend grew largely from an account of his actions published in a 1916 book, Glorious Deeds of Australasians in the Great War. This was a wartime propaganda effort, and many of its stories of Simpson, supposedly rescuing 300 men and making dashes into no man's land to carry wounded out on his back, are demonstrably untrue. In fact, transporting that many men down to the beach in the three weeks that he was at Gallipoli would have been a physical impossibility, given the time the journey took.[5] However, the stories presented in the book were widely and uncritically accepted by many people, including the authors of some subsequent books on Simpson.

The few contemporary accounts of Simpson at Gallipoli speak of his bravery and invaluable service in bringing wounded down from the heights above Anzac Cove through Shrapnel and Monash Gullies. However, his donkey service spared him the even more dangerous and arduous work of hauling seriously wounded men back from the front lines on a stretcher.

There have been several petitions over the decades to have Simpson awarded a Victoria Cross (VC) or an Australian Victoria Cross.[6] There is a persistent myth that he was recommended for a VC, but that this was either refused or mishandled by the military bureaucracy. However, there is no documentary evidence that such a recommendation was ever made.[7] The case for Simpson being awarded a VC is based on diary entries by his Commanding Officer that express the hope he would receive either a Distinguished Conduct Medal or VC. However, the officer in question never made a formal recommendation for either of these medals. Simpson's Mention in Despatches was consistent with the recognition given to other men who performed the same role at Gallipoli.[citation needed]

In April 2011 the Australian Government announced that Simpson would be one of a number of servicemen examined in an inquiry into "Unresolved Recognition for Past Acts of Naval and Military Gallantry and Valour."[8] The tribunal for this inquiry is directed to make recommendations on the awarding of decorations, including the Victoria Cross.