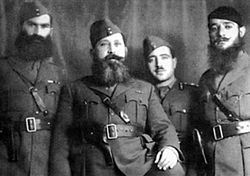 Napoleon Zervas (Greek: Ναπολέων Ζέρβας; Arta, May 17, 1891 – Athens, December 10, 1957) was a Greek general and resistance leader during World War II. He organized and led the National Republican Greek League (EDES), the second most significant (after EAM), in terms of size and activity, resistance organization against the Axis Occupation of Greece.

Zervas was born in Arta, Epirus, and was of Souliote origin.[1] After finishing high school in 1910, he volunteered for the Hellenic Army. During the Balkan Wars, he was promoted to the rank of first sergeant. Later he attended the Hellenic Army NCO School and graduated as sergeant major in 1914.

Zervas was a fanatic Venizelist, and in 1916 he was among the very first to join the venizelist Movement of National Defence in Thessaloniki. He served with distinction in many battles of the Macedonian front during World War I, being eventually promoted to Major. After the defeat of Venizelos' Liberal Party in the elections of 1920, he fled to Constantinople. He only returned to Athens in late 1922, after the Revolution of September 1922, and rejoined the Army.

Three years later, after the establishment of General Theodoros Pangalos' dictatorship (June 1925), he was appointed as Garrison Commander of the city of Athens and at the same time, took command of the Second Battalion of the Republican Guard. These troops served as the main strongholds of Pangalos' military regime in the capital. Nevertheless, Zervas participated in the coup d'état of 22 August 1926, led by General Georgios Kondylis, that overthrew Pangalos. Zervas however confronted Kondylis a month later, when the new strongman sought to disarm and dissolve the Republican Guard. Bloody battles took place in Athens between Zervas' battalion and the governmental forces. After his defeat, Zervas was sentenced to life in prison. However, two years later, the newly established republican government of Eleftherios Venizelos (the Liberals' government of 1928-1932), granted him amnesty and Zervas was named Lieutenant Colonel in retirement.

In September 1941, a few months after the start of the Axis Occupation of Greece, Zervas, along with other Venizelist army officers and political figures, founded the National Republican Greek League (EDES). The goals of EDES were the fight against the conquerors of Greece, the abolition of the Greek monarchy and the establishment of a republic on social-democratic principles. A few months later, with his political advisor and second-in-command of EDES, Komninos Pyromaglou, he went to the mountains of Epirus, where he founded the military branch of EDES, the EOEA (Ethnikes Omades Ellinon Antarton, National Groups of Greek Guerrillas). The EDES-EOEA forces were proclaimed as combatant forces of the Allied Armies by the British General Headquarters of Middle East. Zervas incorporated not only republicans but increasingly also royalists into his movement, who saw EDES as the only acceptable alternative to EAM, the Communist-dominated rival resistance movement that had established itself over most of the country. EOEA's activities were largely confined to Epirus, but Zervas had some control of Aitoloakarnania, in the Valtos area.

In November 1942, the forces of EDES and those of ELAS (under the command of Aris Velouchiotis), in collaboration with a small group of British expert saboteurs, blew up the Gorgopotamos Bridge. In the final stages of the Occupation, EDES was contained strictly in the area of Epirus, having lost Aitoloakarnania, after a mini-civil war with ELAS in 1943. During the December 1944 clashes, EDES was attacked once more by Aris Velouchiotis, and in 24 hours was obliged to leave Epirus and fled to the island of Corfu. On 15 February 1945, after the defeat of ELAS in Athens by the governmental and British forces, Zervas dissolved the remnants of his guerilla force in Corfu.

Expulsion of the Chams

During late 1944 and 1945, Zervas and EDES were also responsible for the expulsion of the entire Muslim Cham Albanian minority, ca. 20,000 strong, from the Greek region of Epirus. The Chams, little integrated into Christian Greek society, had been a subject of Italian-sponsored Albanian irredentism both before and during the war, while a large part had collaborated with the Axis, taking part in reprisal actions against the Greek population. A small part joined the left-wing EAM-ELAS guerrillas, but the majority of their elites had allied with the Axis.[2] On 18 June 1944, EDES forces under Zervas with Allied support launched an attack on Paramythia, in Thesprotia. After a short-term conflict against the combined Cham-German forces, the town was finally liberated. Soon after, violent reprisals were carried out against the town's Muslim community.[3] In late summer 1944, EDES carried out attacks, accompanied by much violence and looting, against the Chams, which caused most of them to flee across the border to Albania.[4][5]

After World War II, Zervas founded the National Party and at the elections of the 31st of March 1946, he was elected as representative of the Ioannina district in the Hellenic Parliament, while his party gained 25 seats in it. Later, he participated in Dimitrios Maximos' cabinet as Minister without portfolio, from 24 January to 23 February 1947, and afterwards as Minister for Public Order until 29 August 1947.[6]

The United States of America and the United Kingdom opposed his appointment suspecting him of collaboration with Nazi Germany during World War II and dictatorial ambitions.[7] Some leftist writers believe that Zervas collaborated with the Germans to face ELAS. However, most writers consider that the Germans made fake documents to provoke disbelief and suspicion among resistant groups of Greece, and take advantage of their mini civil wars, which weakenened them furthermore.

As a Minister for Public Order, Zervas initiated inefficient reforms of the gendarmerie and ordered mass arrests of Communists.[7] When he was replaced, Dwight Griswold, head of the U.S economic mission in Greece, said "I feel he is making more Communists than he is eliminating".[7] A few years later, Zervas merged his party with the Liberal Party and was re-elected as representative of Ioannina in the Parliament. He then served as Minister of Public Works in Sophoklis Venizelos' cabinets from 2 September 1950 to 30 September 1951, also holding the portfolio of Merchant Marine until 1 February 1951.[8][9] He did not manage his reelection in the Parliament at the next elections and withdrew from politics. He died on December 10, in Athens.