Amiodarone is an antiarrhythmic agent (medication used for irregular heart beat) used for various types of tachyarrhythmias (fast forms of irregular heart beat), both ventricular and supraventricular (atrial) arrhythmias. Discovered in 1961, it was not approved for use in the United States until 1985. Despite relatively common side-effects, it is used in arrhythmias that are otherwise difficult to treat with medication. Related newer compounds, such as dronedarone, have lower efficacy but a reduced rate of side-effects.

Amiodarone was initially developed in 1961 at the Labaz company, Belgium, by chemists Tondeur and Binon. It became popular in Europe as a treatment for angina pectoris.[1][2]

Based on Singh's work, the Argentinian physician Dr. Mauricio Rosenbaum began using amiodarone to treat his patients who suffered from supraventricular and ventricular arrhythmias, with impressive results. Based on papers written by Dr. Rosenbaum developing Singh's theories, physicians in the United States began prescribing amiodarone to their patients with potentially life-threatening arrhythmias in the late 1970s.[4][5] By 1980, amiodarone was commonly prescribed throughout Europe for the treatment of arrhythmias, but in the U.S. amiodarone remained unapproved by the Food and Drug Administration, and physicians were forced to directly obtain amiodarone from pharmaceutical companies in Canada and Europe.[citation needed]

The FDA was reluctant to officially approve the use of amiodarone, since initial reports had shown increased incidence of serious pulmonary side-effects of the drug. In the mid 1980s, the European pharmaceutical companies began putting pressure on the FDA to approve amiodarone by threatening to cut the supply to American physicians if it were not approved. In December 1985, amiodarone was approved by the FDA for the treatment of arrhythmias.[6] This makes amiodarone one of the few drugs approved by the FDA without rigorous randomized clinical trials.

Amiodarone is available in oral and intravenous formulations.

It is also available in intravenous ampules and vials, typically in 150 mg increments.

The dose of amiodarone administered is tailored to the individual and the dysrhythmia that is being treated. When administered orally, the bioavailability of amiodarone is quite variable. Absorption ranges from 22 to 95%, with better absorption when it is given with food.[7]

Amiodarone is fat-soluble, and tends to concentrate in tissues including fat, muscle, liver, lungs, and skin. This confers a high volume of distribution (5000 liters in a 70 kg adult) and a long half-life. Due to the long half-life of amiodarone, oral loading typically takes days to weeks.

An oral loading dose is typically a total of 10 grams, divided over one to two weeks but there are many other dosing regimens. Once an individual is loaded, a typical maintenance dose of amiodarone is 100 or 200 mg either once or twice daily.

An intravenous loading dose is typically 300 mg in 20-30cc D5W for cardiac arrest. The loading infusion for dysrhythmias is typically 150 mg in a 100cc bag of D5W given over 10 minutes. Both can be followed by a 360 mg slow infusion over 6 hours then a maintenance infusion of 540 mg over 18 hours.

Amiodarone is categorized as a class III antiarrhythmic agent, and prolongs phase 3 of the cardiac action potential. It has numerous other effects however, including actions that are similar to those of antiarrhythmic classes Ia, II, and IV.

Amiodarone resembles thyroid hormone, and its binding to the nuclear thyroid receptor might contribute to some of its pharmacologic and toxic actions [8]

The treatment of choice for ventricular fibrillation (VF) is electrical defibrillation. However, amiodarone can be useful in shock-refractory VF. In the ARREST trial, amiodarone was shown to improve survival to hospital admission (when compared to placebo) in individuals who suffer cardiac arrest with shock-refractory VF.[9] It is on the basis of this study that the guidelines created by the American Heart Association for the treatment of VF include amiodarone as a second line agent (after epinephrine or vasopressin). ARREST was not adequately powered to demonstrate survival to hospital discharge.

Individuals who have undergone open heart surgery are at an increased risk of developing atrial fibrillation (or AF) in the first few days post-procedure. In the ARCH trial, intravenous amiodarone (2 grams administered over 2 days) has been shown to reduce the incidence of atrial fibrillation after open heart surgery when compared to placebo.[10] However, clinical studies have failed to demonstrate long-term efficacy and have shown potentially fatal side effects such as pulmonary toxicities. While Amiodarone is not approved for AF by the FDA, it is a commonly prescribed off-label treatment due to the lack of efficacious treatment alternatives.

So called 'acute onset atrial fibrillation', defined by the North American Society of Pacing and Electrophysiology (NASPE) in 2003, responds well to short duration treatment with amiodarone. This has been demonstrated in seventeen randomised controlled trials, of which five included a placebo arm. The incidence of severe side effects in this group is low.

The benefit of amiodarone in the treatment of atrial fibrillation in the critical care population has yet to be determined but it may prove to be the agent of choice where the patient is haemodynamically unstable and unsuitable for DC cardioversion. It is recommended in such a role by the UK government's National Institute for Health and Clinical Excellence (NICE).

It is contraindicated in individuals with sinus nodal bradycardia, atrioventricular block, and second or third degree heart block who do not have an artificial pacemaker.

Individuals with baseline depressed lung function should be monitored closely if amiodarone therapy is to be initiated.

The injection should not be given to neonates, because the benzyl alcohol it contains may cause the fatal "gasping syndrome".

Amiodarone can worsen the cardiac arrhythmia brought on by Digitalis toxicity.

On August 8, 2008 FDA issued a warning of the risk of rhabdomyolysis, which can lead to kidney failure or death, when simvastatin is used with amiodarone. This interaction is dose-dependent with simvastatin doses exceeding 20 mg. This drug combination especially with higher doses of simvastatin should be avoided.[11]

Interactions with other drugs

The pharmacokinetics of numerous drugs, including many that are commonly administered to individuals with heart disease, are affected by amiodarone. Particularly, doses of digoxin should be halved in individuals taking amiodarone.

Amiodarone potentiates the action of warfarin. Individuals taking both of these medications should have their warfarin dose halved and their anticoagulation status (measured as prothrombin time (PT) and international normalized ratio (INR)) measured more frequently. The effect of amiodarone in the warfarin concentration can be as early as a few days after initiation of treatment, or can be delayed a few weeks.

Amiodarone inhibits the action of the cytochrome P450 isozyme family. This reduces the clearance of many drugs, including the following: -

Amiodarone has numerous side effects. Most individuals administered amiodarone on a chronic basis will experience at least one side effect. 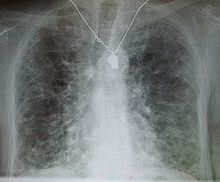 A chest X-ray demonstrating pulmonary fibrosis due to amiodarone.

The most serious reaction that is due to amiodarone is interstitial lung disease. Risk factors include high cumulative dose, more than 400 milligrams per day, duration over two months, increased age, and preexisting pulmonary disease. Some individuals were noted to develop pulmonary fibrosis after a week of treatment, while others did not develop it after years of continuous use. Common practice is to avoid the agent if possible in individuals with decreased lung function.

The most specific test of pulmonary toxicity due to amiodarone is a dramatically decreased DLCO noted on pulmonary function testing.

Thyroxine and amiodarone have similar structures.

Due to the iodine content of the agent (37.3% by weight), abnormalities in thyroid function are common. Amiodarone is structurally similar to thyroxine (a thyroid hormone), which contributes to the effects of amiodarone on thyroid function.[citation needed] Both under- and overactivity of the thyroid may occur on amiodarone treatment. Measurement of free thyroxine (FT4) alone may be unreliable in detecting these problems and thyroid-stimulating hormone (TSH) should therefore also be checked every 6 months.[12]

Thyroid uptake measurements (I-123 or I-131), which are used to differentiate causes of hyperthyroidism, are generally unreliable in patients who have been taking amiodarone. Because of the high iodine content of amiodarone, the thyroid gland is effectively saturated, thus preventing further uptake of isotopes of iodine. However, the radioactive iodine uptake (nuclear thyroid uptake test) may still be helpful in the diagnosis and management of amiodarone-induced hyperthyroidism.[citation needed]

Corneal micro-deposits (Corneal verticillata, also called vortex keratopathy) are almost universally present (over 90%) in individuals taking amiodarone for at least 6 months. These deposits typically do not cause any symptoms. About 1 in 10 individuals may complain of a bluish halo. Optic neuropathy occurs in 1-2% of people and is not dosage dependent. Bilateral optic disk swelling and mild and reversible visual field defects can also occur.

Abnormal liver enzyme results are common in patients on amiodarone. Much rarer are jaundice, hepatomegaly (liver enlargement), and hepatitis (inflammation of the liver).[14]

Low-dose amiodarone has been reported to cause pseudo-alcoholic cirrhosis.[15][16]

Long-term administration of amiodarone is associated with a blue-grey discoloration of the skin. This is more commonly seen in individuals with lighter skin tones. The discoloration may revert upon cessation of the drug. However, the skin color may not return completely to normal.

Long-term administration of amiodarone has been associated with peripheral neuropathies.[17]

Amiodarone is sometimes responsible for epididymitis, a condition of the scrotum normally associated with bacterial infections but which can also occur as a non-bacterial inflammatory condition. Amiodarone accumulates in the head of the organ and can cause unilateral or bilateral inflammation. It tends to resolve if amiodarone is stopped.[18]

Some cases of gynecomastia have been reported with men on amiodarone.[19]