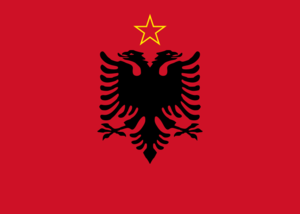 In November 1944 Albania was liberated from the Italian invasion, and a provisional government led by communists ruled the country until the abolishment of the monarchy and the establishment of a . Albania remained closely related with the , , , , , , , and

In 1967 Albania was declared an atheist state and all religions were outlawed.

Upon China's establishing diplomatic relations with in , Hoxha denounced even the "new friendship" and decided to pursue a policy of self-reliance. The result was an extreme isolation [Albania: From Anarchy to a Balkan IdentityISBN 1850652791,by Miranda Vickers & James Pettifer, 1999,page 2,"Enver Hoxha's regime was haunted by fears of external intervention and internal subversion. Albania thus became a fortress state"]

From 1978 to 1992, Albania was an extremely isolated country following views. Enver Hoxha, as well as his successor , emphasized the necessity to remain loyal to Marxist-Leninist ideals and conducted his rule in much of a way. Albania became an autarktic in its economy, despite a few cultural ties with European countries such as . It is noted that the Albanian population had steadily increased during this period and the communist government could hardly supply the people with food.

Following bureaucratic struggles, Alia began to moderate his policies, and the SPR of Albania came to an end in 1992 when the single-party constitution was abrogated in order to introduce democratic, political, and economic reforms which led to the current .

Huge funds were spent between and to build approximately 700,000 concrete bunkers (pill-boxes) to defend the country against a hypothetic multi-front attack.

Upon Hoxha’s death in 1985, succeeded him as State and communist party leader. Alia was Hoxha’s protégé, but was less repressive than the former leader and tolerated minor insignificant reforms. The process was accelerated due to following changes in other communist countries of Central and Eastern Europe.