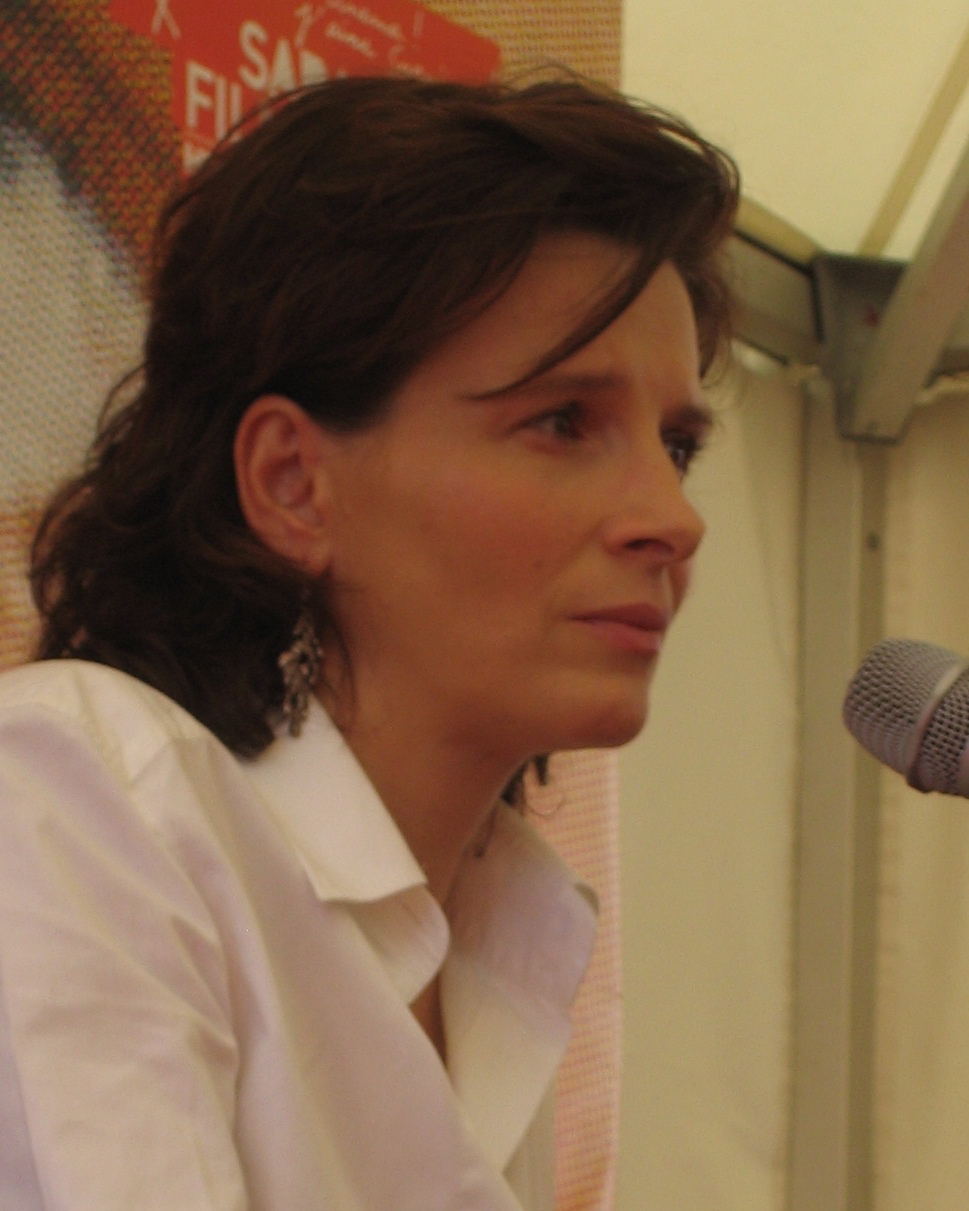 Juliette Binoche (in French pronounced|ʒylijɛt biˈnɔʃ; born 9 March 1964) is an -winning French film actress. Binoche is well known worldwide for her roles in popular, award-winning films such as "The Unbearable Lightness of Being", "The English Patient" (1996) and "Chocolat" (2000) as well as internationally successful arthouse films including "" (1993) and "Caché" (2005). She won the in 1997 for "", becoming the second French actress to win an Oscar.

Binoche was born in , the daughter of Jean-Marie Binoche, a director, actor, and sculptor, and Monique Stalens, a teacher, director, and actress. [ [http://www.filmreference.com/film/9/Juliette-Binoche.html Juliette Binoche Biography (1964-) ] ] Binoche's mother is of Polish descent, and her maternal Polish- grandparents were imprisoned at because they were s. [ [http://www.telegraph.co.uk/arts/main.jhtml?xml=/arts/2007/09/01/sm_juliettebinoche01.xml&page=2 Juliette Binoche: Femme fatale - Telegraph ] ] [http://www.petey.com/kk/docs/binousa.txt] Binoche also has French, Flemish, ian and Moroccan ancestry. [ [http://living.scotsman.com/film.cfm?id=1443072007 Scotsman.com Living ] ] [ [http://www.variety.com/awardcentral_article/VR1117955600.html?nav=actress07 Juliette Binoche, 'Breaking and Entering' - Entertainment News, Film News, Media - Variety ] ] Her parents divorced when she was four and Binoche and her sister Marion were sent to a boarding school.

Binoche began acting in amateur stage productions, and at 17 directed and starred in a student production of the play, "Exit the King". The next year, she studied acting at the National Conservatory of Dramatic Arts of Paris (CNSAD). She found an agent through a friend and joined a theatre troupe in which she toured France, Belgium and Switzerland under the pseudonym of "Juliette Adrienne".

After quitting the CNSAD, she began acting lessons with famed coach . Following in her mother's footsteps, she became a stage actress, occasionally taking small parts in French feature films. Her first screen role was a small part in the 1983 television film "" by , which was followed by a similarly small role in the provincial television film "" by . After Binoche secured her first big screen appearance with a small supporting role in 's Algeria-themed "Liberty Belle", she decided to pursue a career in cinema.

Binoche's early films saw her firmly established as a French star of some renown. The recurring themes of these films were of contemporary young women exploring their lives and their sexuality. Small roles in "" and "" led to more significant exposure in 's "" and 's "La Vie de Famille" which cast her as the teenage stepdaughter of 's character. This film was to set the theme and tone of the early career.

In 1985, Binoche secured the lead role in 's "Rendez-vous". The film premiered at the that year, winning Best Director. In 1986, Binoche was nominated for her first for Best Actress for the film. Binoche's next film was a role in "" by , which was a critical and commercial failure. Later that year, she starred opposite in 's "Mauvais Sang". This film, however, was a critical and commercial success, leading to Binoche's second César Award nomination. In August 1986, she portrayed Tereza in 's "The Unbearable Lightness of Being" based on the novel. This was Binoche's first role and was a worldwide success with critics and audiences alike. After this success, Binoche decided to return to France rather than pursue an international career.

In 1988, she filmed the lead in 's "", a little-seen French film. Later that year she began work on 's "". The film was beset by problems and took three years to complete. When it was released in 1991, "The Lovers on the Bridge" was a critical success. Binoche won a for best actress as well as her third César Award nomination.

Following the long shoot of "Les Amants du Pont-Neuf", Binoche relocated to for the 1992 productions of "" and "Damage", both of which considerably enhanced her international reputation. For "Damage" Binoche received her fourth César Award nomination. In 1993, she appeared in 's "" to much critical acclaim. The film premiered at the 1993 , landed Binoche a Prize in Venice, a , and a nomination. After this success, she took a short sabbatical during which she gave birth to her son, Raphael.

In 1995, Binoche appeared in a big-budget adaptation of 's "The Horseman on the Roof" directed by . The film was a box-office success around the world and Binoche was again nominated for a César Award for Best Actress. This role as a romantic heroine was to color the direction of many of her roles in the late 1990s.

In 1996, Binoche appeared in "" by . The film was a flop, but her next film was "The English Patient", which was based on the acclaimed novel by and directed by . The English Patient was a worldwide hit. It received nine s, including Best Supporting Actress for Binoche. She said in her acceptance speech that it was such a surprise, and that she had thought fellow nominee was going to win; she started to thank people, but only got past her director before laughing that it "must be a dream... a French dream!" [ [http://uk.youtube.com/watch?v=vrZmat5vzFw Juliette Binoche Oscar Acceptance Speech] ]

After this international hit, Binoche returned to France and began work opposite on 's "" , which was based on a true story. However, Binoche was released from this movie six weeks into the shoot, over differences with Berri regarding the authenticity of his script. Next she worked again with André Téchiné on "" (1998), followed in 1999 by "" in which she played 19th-century French writer .

Between 1995 and 2000, Binoche was the advertising face of the scent , her image adorning print campaigns and a TV advertising campaign. There were three commercials featuring Binoche for the perfume, including an advert directed by and scored by .

Following the success of "Chocolat", Juliette Binoche returned to France for an unlikely role. "Jet Lag" (2002) opposite saw Binoche play a ditzy beautician. The film was a box-office hit in France and saw Binoche once again nominated for a César Award for best actress. In 2003, Binoche featured in an Italian TV commercial for the chocolates . This ad played upon her "Chocolat" persona and featured Binoche handing Rochers to people on the streets of Paris. Next Binoche went to to film 's "" (2004) opposite .

Binoche then teamed up with Michael Haneke again for "Caché" in 2005. The film was an immediate success, winning best director at the 2005 Cannes Film Festival. Binoche was nominated for a European Film Award for Best Actress for her role. Binoche's next film was "Bee Season" with . "Mary" (2005) saw Binoche collaborate with for an investigation of modern faith and 's position in the . The film was an immediate success, winning the Grand Prix at the 2005 Venice Film Festival.

2006 saw Binoche take part in the portmanteau work "" appearing in a section directed by . Binoche appeared at the 2006 to launch "A Few Days in September", by . Later in the month she traveled to the for the premiere of "Breaking and Entering", her second film with Anthony Minghella in the director's chair.

2007 was one of Binoche's busiest years. The saw the premiere of "" by the Taiwanese director . The film was well received by international critics and went on to debut around the world in early 2008. "" a romantic comedy opposite was released in October 2007, becoming a popular commercial success. Back in France Binoche was seen to popular and critical success in "Paris" by , "" by and "Désengagement" by . In March 2008 Binoche began work on "Copie Conforme" for opposite . In the Autumn of 2008 Binoche is scheduled to appear in a theatrical dance production titled "" with , featuring stage design by and music by premiering at the National Theatre in London before moving to New York, L.A., Sydney and Paris. [ [http://www.nationaltheatre.org.uk/ National Theatre : National Theatre homepage : Homepage ] ] Beyond that Binoche has been mentioned in connection with Jean-Luc Godard's upcoming film , Juliet McKeon's and new collaborations with and , all scheduled to shoot in 2009.

Binoche has two children: Raphaël (born on 2 September 1993), whose father is André Halle, a professional scuba diver, and Hana (born on 16 December 1999), whose father is actor , with whom Binoche starred in the 1999 film "". Binoche is currently romantically involved with Argentine writer/director .

In the 1991 film "", in which Binoche portrays an artist, the paintings used in the film were Binoche's own work. She also designed the poster for the film.

In 1993, Binoche exhibited work done in collaboration with the French designer and artist . They plan to collaborate again in the future and are currently working on pieces themed by Cinema. [ [http://www.mariinsky.ru/en/opera/fenouillat Mariinsky Theatre biography for Christian Fenouillat] ]

Binoche is involved with a number of charities, including being a patron of the n charity Aspecta since 1992. She is also godmother to nine Cambodian orphans.

In 2004 Binoche organised an auction on behalf of , in which disposable cameras were given to numerous celebrities and then auctioned off; the winner of each camera would then develop the pictures to reveal that celebrity's chosen subject.