Infobox_Film
name = The King and I 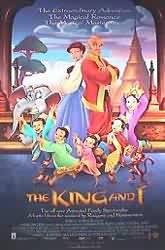 "The King and I" is an animated of the stage musical "", which in turn is adapted from the story. The film was produced by , and released to by in . The animation was done by the Indian company and the US-based .

The story follows the introduction of an English schoolteacher to the royal family of Siam in the 1860s. A clash of cultures occurs when the strong-minded Anna Leonowens brings a different way of thinking to the King of Siam and his numerous children.

Differences for the Musical and 1956 Film

*In the original play, Tuptim falls in love with Lun Tha, who is absent from this film. He is replaced by an adult Chulalongkorn.

* In the original play, while the Kralahome is a cold and 'unfeeling' man, he never plots to destroy the king and take over the throne, as in this version. In truth, he actually is seen originally as very loyal to the king. Nor does he have a little assistant named Master Little.

* Lady Thiang is never addressed by name, and only makes a small appearance during the "Hello Young Lovers" scene.

* Tuptim's love affair is discovered in the original film when she is trying to escape with Lun Tha. Here, she is seen wearing Chulalongkorn's white elephant pendant. Also, while in the play it is hinted that Tuptim is executed after she is caught, in the cartoon, she and Chulalongkorn are both given permission by the king to court happily.

* The king does not have a 'scientific' experiments room, nor does he ever fly in a hot air balloon.

* Anna never takes the children outside the palace.

* In the 1956 film, Tuptim is very enthusastic about reading, and is openly allowed to do so, while in the animated film, it is expressivley forbidden for servants to read.

* In the animated film, Edward Ramsey is seen only as a friend of Anna's, where in the original play, he was an ex-lover of hers.

* While the king comes close to death at one point, he doesn't actually die, as in the play.

* The "Small House" ballet written by Tuptim is absent.

* During the scene where Tuptim and her lover meet in the garden at night in the original movie, she and Lun Tha sing "We Kiss in a Shadow" and the instrumental version of "I Have Dreamed" plays momentarily in the background, but not sung. Interestingly, this is the exact opposite in the cartoon version of the scene with Tuptim and Chulalongkorn.

* Over half the original songs are cut.

* The solo numbers "A Puzzlement" and "Shall I Tell You What I Think Of You?" were shortened.

*Anna is seen getting a house at the end of the film, while in the original musical, the King promises to that he shall give Anna a house of her own, though she is never seen to get it.