New Monasticism, or Neomonasticism, can refer either to a modern movement modelled on a monastic way of life in a contemporary context or a movement within Roman Catholicism to expand the way of life of traditional monastic communities to lay people. 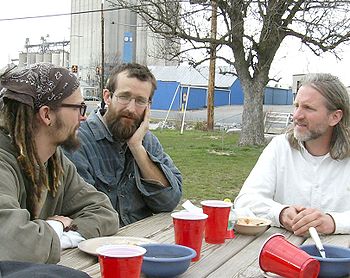 The origin of the new monastic movement is difficult to pinpoint. Some communities now identified with new monasticism have been in existence since the 1970s and 80s. Other well-known communities, such as the Simple Way in Philadelphia formed in the mid-90s.[1]

The notion and terminology of “new monasticism” was developed by Jonathan Wilson in his 1998 book called Living Faithfully in a Fragmented World.[2] Wilson was, in turn, building on ideas of theologian Dietrich Bonhoeffer, who said in 1935: “the restoration of the church will surely come only from a new type of monasticism which has nothing in common with the old but a complete lack of compromise in a life lived in accordance with the Sermon on the Mount in the discipleship of Christ”[3] and philosopher Alasdair MacIntyre. Noting the decline of local community that could sustain the moral life, MacIntyre ended his book After Virtue, by voicing a longing for “another . . . St. Benedict.”[4] By this he meant someone in the present age to lead another renewal of morality and civility through community. Wilson identified with that longing in his own book, but outlined a vision to carry it forward within the Christian tradition.[5]

Calling the vision a "new monasticism", he proposed four characteristics that such a monasticism would entail: (1) it will be “marked by a recovery of the telos of this world” revealed in Jesus, and aimed at the healing of fragmentation, bringing the whole of life under the lordship of Christ; (2) it will be aimed at the “whole people of God” who live and work in all kinds of contexts, and not create a distinction between those with sacred and secular vocations; (3) it will be disciplined, not by a recovery of old monastic rules, but by the joyful discipline achieved by a small group of disciples practicing mutual exhortation, correction, and reconciliation; and (4) it will be “undergirded by deep theological reflection and commitment,” by which the church may recover its life and witness in the world.[6]

The summer of 2004 became a defining moment for the movement, when there was a gathering of a number of existing communities and academics in Durham, North Carolina, where they drew together something like a "rule of life," referred to as the "12 marks" of new monasticism.[7] The gathering took place at a new monastic community called "Rutba House," of which some founding members were Jonathan Wilson-Hartgrove and Leah Wilson-Hartgrove. Not coincidentally, Leah is a daughter of Jonathan Wilson whose writing has galvanized the movement.[8]

The "Twelve Marks" of new monasticism express the common thread of many new monastic communities.[9] These "marks" are:

The movement differs from other Christian monastic movements in many ways.

After the Second Vatican Council's call to encourage the laity to be more involved in religious life there was a growth in the number of lay movements linked to religious orders. These lay organisations, such as the Lay (or Third Order) Franciscans, have existed for centuries. They encourage the laity to take on the principles behind certain religious orders and try to live them in the secular world away from the monastery, friary or priory to which the religious community is linked. An example is the Lay Dominicans. They are called to live by the Four Pillars of Dominican life. These are study, prayer, community and preaching. So Lay Dominicans are encouraged to study the faith regularly, pray and meditate daily, build strong communities of faithful and to evangelise. Whichever religious lay movement someone belongs to they are encouraged to go on retreat at least once a year to a monastery or friary of that community. Lay groups usually meet once a month in church or in people's homes.