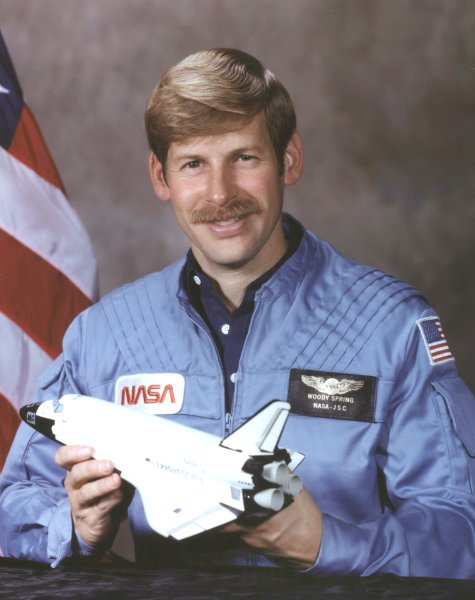 Sherwood Clark "Woody" Spring is a retired Colonel and former . He is the father of United States Olympian .

Born September 3, 1944, in Hartford, Connecticut, but considers Harmony, Rhode Island, to be his hometown. He was active in the where he achieved its second highest rank, . Married to the former Collette (Debbie) Cooper, two children Sarah (Medical School at Georgetown University) and Justin (Men's National Gymnastics Team and Olympic athlete). He enjoys flying, scuba diving, white-water river running, skiing, and carpentry.

After graduation from West Point in 1967, Spring served two tours of duty in Vietnam. The first was from 1968 to 1969 with the . The second tour, 1970-1971, came immediately after flight school and was served as a pilot with the . Upon return, he received fixed wing training en route to a master's degree program with the University of Arizona in 1974. After a short tour at , , as a flight test engineer, he attended the Navy Test Pilot School at . He then returned to the Army's Flight Test Facility at Edwards AFB to complete 4 years as an experimental test pilot.

He has military and civilian experience in 25 types of airplanes and helicopters and has logged more than 3,500 hours flying time--including over 1,500 s in jet aircraft.

Spring was selected as an astronaut in May 1980. His technical assignments have included software verification at the and ; vehicle and satellite integration at the , , for , 6, 7, 8, and 9; Astronaut Office EVA (Extra Vehicular Activity) expert; and Space Station construction, EVA maintenance, and design. Spring served as a mission specialist on STS-61B which flew , through , . During that mission he was responsible for launching three communications satellites and performed two EVA's. During the EVA's, which totaled more than 12 hours, Spring investigated Space Station construction techniques, large structure manipulation while on the end of the remote arm, and a time and motion study for comparison between Earth training and Space performance, with the EASE/ACCESS experiment. With the completion of , he has logged a total of 165 hours in space, including over 12 hours of EVA. After the Challenger accident, Spring participated in the Kennedy Space Center Tiger Team for accident investigation, then led the Astronaut Office EVA (Extra Vehicle Activity) program until 1988.

Following his retirement form NASA in August 1988, Colonel Spring spent the next five years directing the Army Space Program Office in . He retired from the Army in July 1994, and is now a contractor working on Defense and Intelligence programs in the Washington DC area.