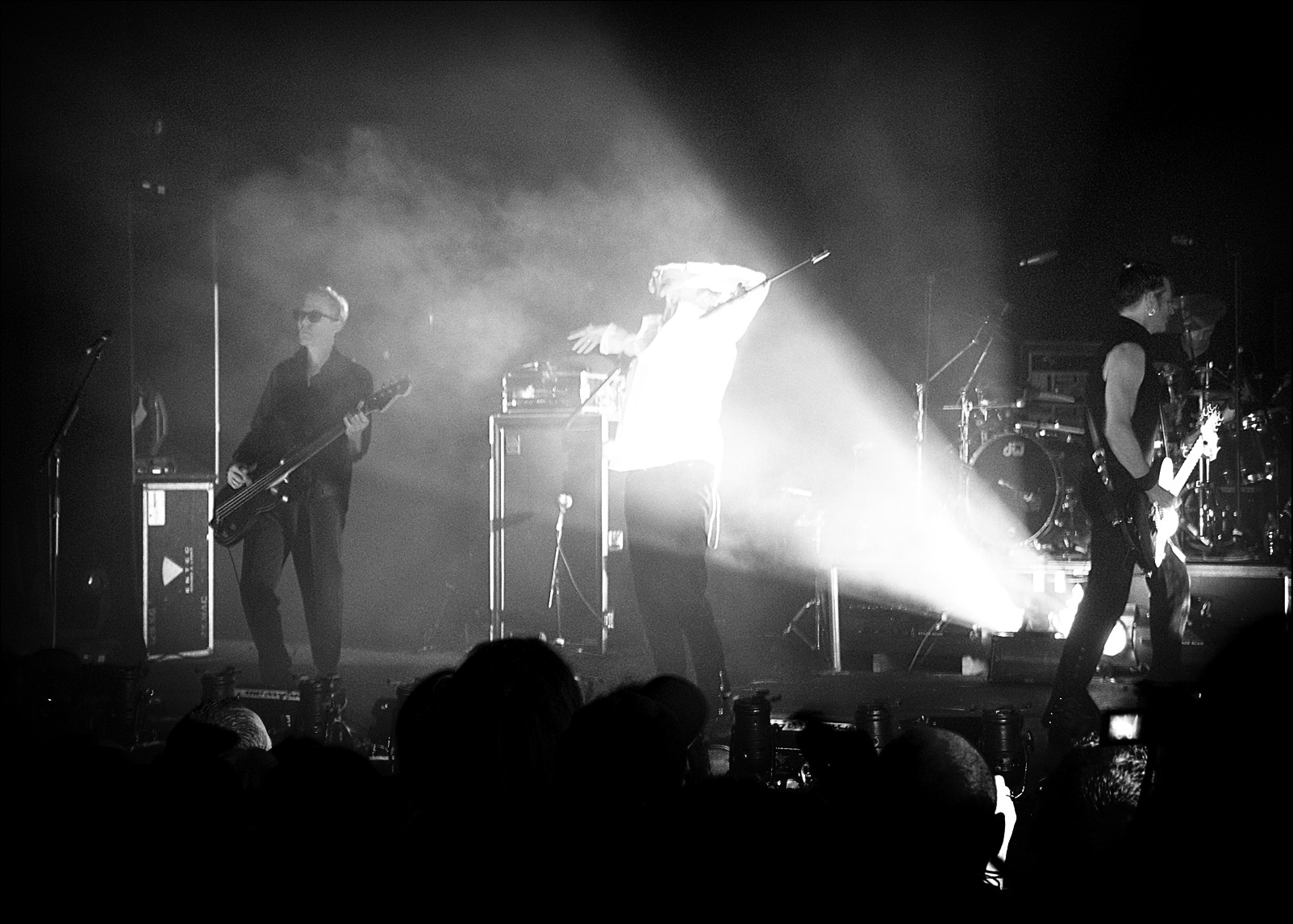 Bauhaus were an English rock band formed in in 1978. The group consisted of Peter Murphy (vocals), (guitar), (drums) and (bass). The band originally went by the name Bauhaus 1919, dropping the latter portion within a year of their formation. With their dark, gloomy sound and image, Bauhaus are generally considered the first group.

Bauhaus first broke up in 1983. Peter Murphy began a solo career while the other members continued as and, later, Love and Rockets. Both enjoyed greater commercial success in the United States than Bauhaus had, but disappeared from the charts in their homeland. The band reunited for a 1998 tour and on a more permanent basis in 2005. The group announced plans to disband again before the release of their final album, "" (2008).

, his friend , and Haskins's younger brother had played together in various bands since childhood, often not lasting more than one gig. One of the longer-lived of these was a band called The Craze, which performed a few times around Northampton. However, the Craze still split up fairly quickly, and Ash once again tried to convince his old school friend to join him, simply because Ash thought he had the right look for a band. [Shirley, p. 18] Murphy, who was working in a printing factory, decided to give it a try, despite never having written any lyrics or music. During their first rehearsal, he co-wrote the song "In the Flat Field." [Thompson, p. 52] Ash's old bandmate Kevin Haskins joined as the drummer. Ash made a point of not inviting David J, the driving force in their previous bands, because he wanted a band he could control. [Shirley, p. 19] After only a few weeks though, Ash reconsidered and invited Haskins to replace original bassist Chris Barber. Haskins had already agreed to tour American airbases with another band, but decided that joining his friends' group was "the right thing to do." With their lineup complete, the unnamed band played their first gig at the Cromwell pub in Wellingborough on New Year's Eve 1978. [Shirley, p. 20]

The band chose the name "Bauhaus 1919", a reference to the German art movement of the 1920s, because of its "stylistic implications and associations", according to David J. [Shirley, p. 21] Bauhaus associate Graham Bentley said that the group was unlike any Northampton band of the time, most of which played predominantly . [Shirley, p. 22] Bentley videotaped a performance by the group, which was sent to several record labels in the hope of obtaining a contract. This approach was hindered partly because many record companies at the time did not have home video equipment or Bentley had to provide it himself, so the group decided to record a demo. [Shirley, p. 23-24]

Together for only six weeks, Bauhaus entered the studio for the first time at Beck Studios in to record a demo. [Shirley, p. 25-26] The band recorded five songs; one of the tracks from the session, "", running more than nine minutes, was released as the group's debut single in August 1979 on as Bauhaus (the 1919 abandoned). [Shirley, p. 28-29] [Thompson, p. 59] The single received a positive review in "Sounds" and stayed on the British independent charts for two years. The song received crucial airplay on and DJ 's evening show, and Bauhaus was subsequently asked to record a session for Peel's show, which was broadcast on January 3, 1980. [Shirley, p. 30]

The band released three more singles, "", "" and "" (originally written by pioneers T.Rex) before the debut of their first album "" in 1980 on . Despite negative reviews, "In the Flat Field" topped the indie charts and made headway onto the British pop charts, peaking for one week at number 72. [Shirley, p. 46]

Bauhaus' growing success outstripped 4AD's resources, so the band moved to 4AD's parent label . [Shirley, p. 56] Bauhaus released "" as its debut release on the label. The single reached number 59 on the charts. [Shirley, p. 57] the following single "" peaked at number 56. [Shirley, p. 60] Bauhaus released its second album "Mask" in October 1981. The band employed keyboards and other instruments to add to the album's sounds. In an unconventional move, the group shot a video for the album's title track as a promotional tool for the band as a whole and not any specific song from the record. [Shirley, p. 63-64]

Bauhaus followed with the single "Spirit", produced by Hugh Jones and intended to break into the Top 30. However, "Spirit" only reached number 42. The band was displeased with the single and re-recorded it for its third album "" (1982). [Thompson, p. 115] In the same year Bauhaus scored their biggest hit with a cover of 's "Ziggy Stardust", which was recorded during a BBC session. The song reached number fifteen on the British charts and earned the band an appearance on the television show "". [Shirley, p. 78] Thanks to the success of the single, the album also became the band's biggest hit, peaking at number four. [Shirley, p. 79] That same year Bauhaus made an appearance in the horror film "", where they performed "Bela Lugosi's Dead" during the opening credits. The final cut of the scene focused on Murphy; this, coupled with the singer's modelling work in a popular ad campaign for , caused resentment among the rest of the group. [Shirley, p. 91-93]

Prior to the recording of their fourth album "" (1983) Peter Murphy was stricken with pneumonia, which prevented him from contributing much to the album. Daniel Ash and David J took the reins and became the driving forces behind the record, and even did lead vocals on a few tracks. [Shirley, p. 96-97] The album's lead single, "", reached number 26 on the charts and earned Bauhaus their third and final "Top of the Pops" appearance. [Shirley, p. 99] Bauhaus then embarked on an international promotional tour for the album, with dates in Europe and the Far East. [Thompson, p. 137] David J recalled that the night before they were supposed to perform two shows at in London the group decided to disband. The band played their farewell show on 5 July 1983 at the Hammersmith Palais; dedicated fans had been warned by the band's crew not to miss the show without telling them it was the last. After a long encore consisting of some of their early songs, David J left the stage with the words "rest in peace". [Thompson, p. 137] "Burning from the Inside" was released a week later. The album received largely positive reviews and reached number 13 on the charts. [Shirley, p. 100] Bauhaus released the single "Sanity Assassin" in limited quantities as a farewell gift for those who joined the group's fanclub. [Shirley, p. 102]

After Bauhaus disbanded, all members of the band did various solo work. Peter Murphy worked briefly with bassist of Japan in the band before going solo with such albums as "Deep" and "". Daniel Ash had already started with Bauhaus roadie Glen Campling as a side-project in 1981; after Bauhaus broke up Kevin Haskins joined the group, which released an album and several EPs before breaking up following a 1984 American tour. [cite web
url = http://www.rollingstone.com/artists/bauhaus/biography
title = Rolling Stone: Bauhaus Biography
accessdate = 2008-04-29
work = The Rolling Stone Encyclopedia of Rock & Roll
publisher = Simon & Schuster, 2001]

David J has released multiple solo albums and has collaborated with several other musicians such as , as well as with comics writer/spoken-word artist in the band , on the album "V", based on Moore's comic "" and on Moore's performance piece "", over the years.

During a discussion about the state of their projects at the time, Ash and David J began talking about reforming Bauhaus. All four band members arranged a rehearsal, but Murphy failed to show up the day it was scheduled. The other three band members rehearsed regardless, and were inspired by the chemistry they had as a trio. As a result, Ash and the Haskins brothers formed Love and Rockets in 1985. [Shirley, p. 113-14] Love and Rockets scored a US hit four years later with "". The band broke up after seven albums in 1999. Both Daniel Ash and David J released solo albums during the Love and Rockets years; Peter Murphy contributed backing vocals to David J's 1992 single "Candy on the Cross."

Bauhaus reunited for the "Resurrection Tour" in 1998, which featured a new song, "The Dog's a Vapour", which was also included in the soundtrack for the film "". A live album recorded during the tour, "Gotham", was released the following year and included a studio recording of a cover, "Severance."

Bauhaus reunited again in 2005, playing that year's in , California. At the opening of their set, Peter Murphy was lowered to the stage upside-down singing "Bela Lugosi's Dead". Following Peter Murphy's 2005 tour, Bauhaus embarked on a full tour beginning in and in the Autumn of 2005 and ending in in February 2006. The band also mentioned that they hoped to record new music following the tour. In May 2006 the band toured with on the summer leg of the "" tour.

Bauhaus released their first new studio album since 1983, "", in 2008. This marks the end of the band and there will be no tour to support the album. Drummer Kevin Haskins said in an interview that they "were getting along really well, but there was an incident that occurred." As a result, "some of us just felt that we didn't want to carry on as a working unit". [cite web
url = http://www.billboard.com/bbcom/news/article_display.jsp?vnu_content_id=1003680868
title = Bauhaus Bowing Out With New Album
accessdate = 2007-12-14
last = Cohen
first = Jonathan
date = 2007-12-04
format = JSP
work = News
publisher = Billboard.com ] In an interview with , bassist David J said about the breakup: "You have a test tube, and you pour in one chemical, and you pour in another chemical, and something happens. It starts to bubble. Pour in another chemical, and it starts to bubble a bit more. You pour in a fourth chemical, and it bubbles really violently, and then explodes. That's my answer". [cite web
url = http://suicidegirls.com/interviews/David+J+of+Bauhaus/
title = David J of Bauhaus
accessdate = 2008-03-22
last = Hathaway
first = Jay
date = 2008-03-14
work = Interviews
publisher = SuicideGirls ] Peter Murphy claimed in another interview that ..."he was most satisfied with the bonding on an emotional level. It was good to be working together and to put the past behind us and it was very positive. The result was coming out really fast, so it was exciting and it was very enjoyable," but in the end "....That rocky character worked and I think it was a bit right to finish it, really." [cite web
url = http://www.postwave.gr/index.php?option=com_content&task=view&id=794&Itemid=10&limit=1&limitstart=1
title = Peter Murphy of Bauhaus
date = 2008-02-25
work = Interviews
publisher = Postwave.gr]

Bauhaus combined a number of influences including punk music, , and - even and dub - to create a gloomy, but passionate sound which appealed to many fans left disillusioned by the New Wave that arose in the wake of punk's collapse. Their sound proved influential, inspiring or bringing attention to a whole wave of groups delving into the intense, gloomy style that would eventually come to be known as gothic rock. Its crucial elements included Peter Murphy's deep and sonorous voice, Daniel Ash's innovative guitar playing and David J's dub-influenced bass.