There are three generally accepted boxing styles that are used to define fighters. They are the in-fighter, the out-fighter and the brawler.

In-fighters are often considered the most exciting boxers to watch.[citation needed] This style favors closing inside an opponent, overwhelming them with intensity and flurries of hooks and uppercuts. They tend to be fast on their feet which can make them difficult to evade for a slower fighter.[1] They also tend to have a good "chin" because sometimes this usually involves being hit with many jabs before they can maneuver inside where they are more effective. Notable in-fighters include Manny Pacquiao, Mike Tyson, David Tua, Rocky Marciano, Carlos Monzón, Jake LaMotta, Marco Antonio Barrera, Antonio Margarito, Julio César Chávez, Joe Frazier & Micky Ward.. 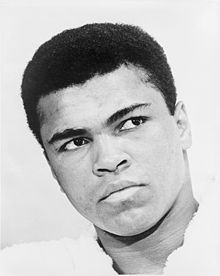 Out-fighters (also known as an "out-boxer" or "boxer") are the opposite of the in-fighter. Where the in-fighter tries to close the gap between himself and his opponent, the out-fighter seeks to maintain that gap and fight with faster, longer range punches.[1] Since they rely on the weaker jabs and straights (as opposed to hooks and uppercuts), they tend to win by points decisions rather than by knockout, although some out-fighters (such as Lennox Lewis, Félix Trinidad, Wladimir Klitschko, and Vitali Klitschko ) have notable knock out punches, outside fighters are known for being extremely quick on their feet, which often makes up for their relative lack of power. Out-fighters are often regarded as the best boxers on account of their desire to win a fight by wearing an opponent down and outclassing an opponent by strategy, rather than simply knocking him out.

If the out-fighter represents everything classy about boxing, the brawler (also known as the 'slugger', 'hard hitter' or 'one puncher') often stands for everything that's brutal in the sport.[citation needed] [1] Sluggers tend to lack finesse in the ring, but make up for it in raw power, often able to knock almost any opponent out with a single punch. This ability makes them exciting to watch, and their fights unpredictable. Many brawlers tend to lack mobility in the ring and have difficulty pursuing fighters who are fast on their feet. They prefer the harder, slower punches (such as hooks and uppercuts) and tend to ignore combination punching. Their slowness and predictable punching patterns (single punches with obvious leads) often leaves them open for counterpunching.

These styles are merely archetypes that many boxers fall into.[citation needed] However, some notable fighters transcend any one category. Mike Tyson, although known primarily as a brawler, was a very intense in-fighter in the first half of his career. He had the strength of a brawler, but the combos, agility and ferocity of an in-fighter, which earned him his devastating reputation. Muhammad Ali, known for his footwork and blindingly fast jab, could mix it up on the inside with fast flurries, using his large frame and fast handspeed for more power. Naseem Hamed was primarily a slugger, favouring single, heavy punches, but his agility and reflexes allowed him to move like an out-fighter.

A less common style of boxing, the swarmer is a boxer who attempts to overwhelm his opponent by applying constant pressure. Swarmers tend to have a very good bob and weave, good power, a good chin, and a tremendous punch output (resulting in a great need for stamina and conditioning). Boxers who use the Swarmer style tend to have shorter careers than boxers of other styles. Sustaining the adequate amount of training required to execute this style is nearly impossible throughout an entire career, so most Swarmers can only maintain it for a relatively brief period of time. This inevitably leads to the gradual degradation of the sheer ability to perform the style, leaving him open to increasing amounts of punishment.

Peek-a-Boo is a boxing style where the hands are placed in front of the boxer's face, like in the babies game of the same name. It offers extra protection to the face and makes it easier to jab the opponent's face. Peek-a-Boo boxing was developed by legendary trainer Cus D'Amato. Peek-a-Boo boxing utilizes relaxed hands with the forearms in front of the face and the fist at nose-eye level. Other unique features includes side to side head movements, bobbing, weaving and blind siding your opponent. The number system e.g. 3-2-3-Body-head-body or 3-3-2 Body-Body-head is drilled with the stationary dummy and on the bag until the fighter is able to punch by rapid combinations with what D'Amato called "bad intentions". The style allows swift neck movements as well quick duckings and bad returning damage, usually by rising uppercuts or even rising hooks.

Brawlers tend to overcome in-fighters, because the in-fighter likes to be on the inside, where the hard-hitting brawler is most effective. The in-fighters flurries tend to be less effective than the power punches of the slugger, who quickly overwhelms his opponents. A famous example of this is George Foreman defeating Joe Frazier.

If the in-fighter is a 'meatbag' for the brawler, they tend to succeed against out-fighters. Out-fighters prefer a slower fight, with some distance between themselves and the opponent. The in-fighter tries to close that gap and unleash furious flurries. On the inside, the out-fighter loses a lot of his combat effectiveness, because he cannot throw the hard punches. The in-fighter is generally successful in this case, due to his intensity in advancing on his opponent and his good agility, which makes him difficult to evade. An example of this type of fight is the first fight between Ali and Joe Frazier, the Fight of the Century.

The out-fighter tends to be most successful against the brawler, whose slow speed (both hand and foot) and poor technique make them an easy target to hit for the faster out-fighter. The out-fighter's main key is to stay alert, as the brawler only needs to land one good punch to finish the fight. If the out-fighter can avoid those power punches, he can often wear the brawler down with fast jabs, tiring the slugger out. If he is successful enough, he may even apply extra pressure in the later rounds in an attempt to achieve a knockout.

Hybrid boxers tend to be the most successful in the ring, because they often have advantages against most opponents. Pre-prison Tyson, able to overwhelm any in-fighter with his tremendous power, was also able to use his in-fighting footspeed to close in on and knock out many out-fighters who tried to stay out of his range, such as Michael Spinks. Muhammad Ali's speed kept him away from hard hitters like Sonny Liston and George Foreman, but his strong chin allowed him to go the distance with Joe Frazier. 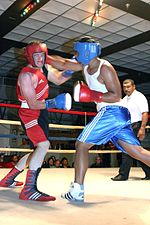 Headgear is mandatory in amateur and Olympic boxing

Boxing techniques utilize very forceful strikes with the hand. There are many bones in the hand, and striking surfaces without proper technique can cause serious hand injuries. Today, most trainers do not allow boxers to train and spar without hand/wrist wraps and gloves. Handwraps are used to secure the bones in the hand, and the gloves are used to protect the hands from blunt injury, allowing boxers to throw punches with more force than if they did not utilize them.

Headgear, used in amateur boxing, protects against cuts, scrapes, and swelling, but does not protect very well against concussions. Headgear does not sufficiently protect the brain from the jarring that occurs when the head is struck with great force. Also, most boxers aim for the chin on opponents, and the chin is usually not padded. Thus, a powerpunch can do a lot of damage to a boxer, and even a jab that connects to the chin can cause damage, regardless of whether or not headgear is being utilized.

The modern boxing stance is a reflection of the current system of rules employed by professional boxing. It differs in many ways from the typical boxing stances of the 19th and early 20th centuries.

The following stance applies for a right-handed boxer. The boxer stands with the legs shoulder-width apart with the right foot a half-step behind the left foot. The left (lead) fist is held vertically about six inches in front of the face at eye level. The right (rear) fist is held beside the chin and the elbow tucked against the ribcage to protect the body. The chin is tucked into the chest to avoid punches to the jaw which commonly cause knock-outs. Modern boxers can sometimes be seen "tapping" their cheeks or foreheads with their fists in order to remind themselves to keep their hands up (which becomes difficult during long bouts). Modern boxers are taught to "push off" with their feet in order to move effectively. Forward motion involves lifting the lead leg and pushing with the rear leg. Rearward motion involves lifting the rear leg and pushing with the lead leg. During lateral motion the leg in the direction of the movement moves first while the opposite leg provides the force needed to move the body. Also the shoulder thrown forward fast enough can create enough force to knock someone clean off their feet.

These different punching types can be combined to form 'combos', like a jab and cross combo. Nicknamed the one two combo, it is a really effective combination because the jab blinds the opponent and the cross is powerful enough to knock the opponent out.

There are 3 main defensive positions (guards or styles) used in boxing: