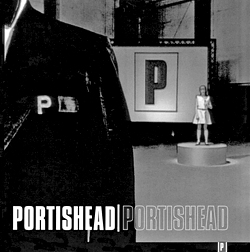 "Portishead" is the second album from the band of the same name, released in 1997 on GO! Beat Records.

It presents a darker, grainier sound than their previous record. It received less attention from the media but managed to reach #2 on the and #21 on the chart. It is the longest of the band's three albums.

*"" (10/03/97, p.84) - "This sophomore spook-athon from chilly U.K. combo Portishead clanks across the attic, via Geoff Barrow's skeletal samples and funereal keyboards. Beth Gibbons' surgical-steel voices slices into her partner's scraps of musical meat, for an effect that's hypnotic, bloodless, and addictive." - Rating: A

*"Vibe" (11/97, p.152) - "Beth Gibbons shows off stark vocal mood swings as she croons and claws under a bitter moon. A 30-piece orchestra keeps you strung out on drama, while producers/bandmates Adrian Utley and Geoff Barrow snap out the beats."

*"The Source" (11/97, p.174) - "...crafted with care and eloquence, and somehow articulating the space that exists between the emotional and the physical....Portishead succeed with aplomb on their eponymously-titled follow-up album..."

*"Musician" (11/97, p.86) - "Gibbons' extraordinary voice has grown darker, nastier, and more spine-tingling, while the new songs vary from grim...to serene....Portishead looks over the cliff, then dives headlong into the abyss."

Tracks written by , and , except where noted.

* "All Mine" was later covered by Tom Jones and The Divine Comedy
* "Mourning Air" had previously appeared on "".
* "Only You" was later released in a promotional French language lyrics version