Tansy
Not be confused with tansy ragwort or tansy mustard. For the 1921 British film, see Tansy (film). 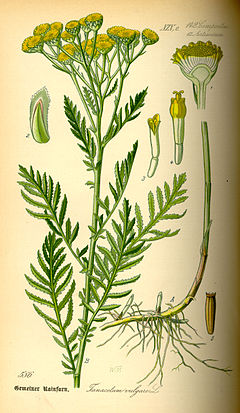 Illustration of a tansy

Tansy (Tanacetum vulgare) is a perennial, herbaceous flowering plant of the aster family, native to temperate Europe and Asia. It has been introduced to other parts of the world and in some areas has become invasive. It is also known as Common Tansy, Bitter Buttons, Cow Bitter, Mugwort, or Golden Buttons.

Tansy is a flowering herbaceous plant with finely divided compound leaves and yellow, button-like flowers. It has a stout, somewhat reddish, erect stem, usually smooth, 50–150 cm tall, and branching near the top. The leaves are alternate, 10–15 cm long and are pinnately lobed, divided almost to the center into about seven pairs of segments, or lobes, which are again divided into smaller lobes having saw-toothed edges, giving the leaf a somewhat fernlike appearance. The roundish, flat-topped, button-like, yellow flower heads are produced in terminal clusters from mid-to-late summer. The scent is similar to that of camphor with hints of rosemary. The leaves and flowers are toxic if consumed in large quantities; the volatile oil contains toxic compounds including thujone, which can cause convulsions and liver and brain damage. Some insects, notably the tansy beetle Chrysolina graminis, have evolved resistance to the toxins and subsist almost exclusively on the plant.

Tansy is native to Eurasia; it is found in almost all parts of mainland Europe. It is absent from Siberia and some of the Mediterranean islands.[1] The ancient Greeks may have been the first to cultivate it as a medicinal herb.[2] In the sixteenth century it was considered to be "necessary for a garden" in Britain.[3]

Tansy has a long history of use. It was first recorded as being cultivated by the ancient Greeks for medicinal purposes. In the 8th century AD it was grown in the herb gardens of Charlemagne and by Benedictine monks of the Swiss monastery of Saint Gall. Tansy was used to treat intestinal worms, rheumatism, digestive problems, fevers, sores, and to “bring out” measles.[2] [4] [5] [6] [7]

During the Middle Ages and later, high doses were used to induce abortions.[5][8][9] Contradictorily, tansy was also used to help women conceive and to prevent miscarriages.[4][5][10] In the 15th century, Christians began serving tansy with Lenten meals to commemorate the bitter herbs eaten by the Israelites.[7][10] Tansy was thought to have the added Lenten benefits of controlling flatulence brought on by days of eating fish and pulses[4][5] and of preventing the intestinal worms believed to be caused by eating fish during Lent.[11]

Tansy was used as a face wash and was reported to lighten and purify the skin.[4][5] In the 19th century, Irish folklore suggested that bathing in a solution of tansy and salts would cure joint pain.[12] Although most of its medicinal uses have been discredited, tansy is still a component of some medicines and is listed by the United States Pharmacopeia as a treatment for fevers, feverish colds, and jaundice.[2][5][10]

Tansy has also been cultivated and used for its insect repellent and preservative effects. It has been used for centuries as an insect and in the worm warding type of embalming.[2][5][6] It was packed into coffins, wrapped in funeral winding sheets, and tansy wreaths were sometimes placed on the dead.[2][5][6][10] Henry Dunster, the first president of Harvard University, was buried wearing a tansy wreath in a coffin packed with tansy; when “God’s Acre” was moved in 1846 the tansy had maintained its shape and fragrance, helping to identify the president’s remains.[2][5][10] By the 19th century, tansy was used so much at New England funerals that people began to disdain it for its morbid association with death.[5][7]

During the American colonial period, meat was frequently rubbed with or packed in tansy leaves to repel insects and delay spoilage.[2][5][10] Tansy was frequently worn at that time in shoes to prevent malaria and other fevers;[5][10] it has been shown, however, that some mosquito species including Culex pipiens take nectar from tansy flowers.[13]

Tansy can be used as in companion planting, and for biological pest control in organic gardens and sustainable agriculture. It is planted alongside potatoes to repel the Colorado potato beetle, with one study finding tansy reduced the beetle population by 60 to 100%.[5][14][15]

In England tansy is placed on window sills to repel flies; sprigs are placed in bed linen to drive away pests, and it has been used as an ant repellent.[16]

In the 1940s, distilled tansy oil mixed with fleabane, pennyroyal and diluted alcohol was a well known mosquito repellent; collectors were paid five cents a pound for tansy in full bloom.[5][17] Research has found that tansy extracts do indeed repel mosquitoes, but not as effectively as chemical pesticide products containing diethyltoluamide [5][18](i.e. DEET.) In 2008, researchers in Sweden investigated the use of tansy to repel ticks, showing a 64–72% repellency for each oil constituent.[19]

Tansy contains a volatile oil which can cause contact dermatitis in sensitive individuals. If taken internally, toxic metabolites are produced as the oil is broken down in the liver and digestive tract. It is highly toxic to internal parasites, and for centuries tansy tea has been prescribed by herbalists to expel worms. Tansy is an effective insecticide, and is highly toxic to arthropods.[20] Because it contains thujone, the U.S. FDA limits the use of tansy to alcoholic beverages, and the final product must be thujone-free.[21]

The active components of the volatile oil include 1,8-cineole, trans-thujone, camphor and myrtenol, with the quantities and proportions of each varying seasonally and from plant to plant.[5][18][22][23][24]

1,8-cineole is a toxin believed to defend the plant leaves against attacks by herbivores.[22][23] It has many biological activities including allelopathy, anesthetic, antibacterial, carcinogenic, fungicide, herbicide, insectifuge, nematicide, sedative, testosterone hydroxylase inducer, and others.[5][18][22][23]

Thujone is a GABA receptor antagonist that sensitises neurons; it is reputed to be an aphrodisiac, increasing brain activity and causing hallucinations, spasms, convulsions, and even death.[22][23]

Camphor has various uses, including manufacture of plastics, lacquers and varnishes, explosives and pyrotechnics; as a moth repellent; as a preservative in pharmaceuticals and cosmetics; to relieve itching and pain by creating a cooling effect on the skin; as an injectable antibacterial for root canals in dentistry; as a food flavor enhancer; and as a medical ingredient in chest rubs.[22][23]

Myrtenol has been used as an insect pheromone in insect trapping, as a beverage preservative, a flavoring and a fragrance.[22][23] 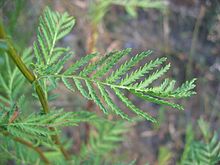 Tansy was formerly used as a flavoring for puddings and omelets, but is now almost unknown. The herbalist John Gerard noted that tansy was well known as “pleasant in taste”, and he recommends tansy sweetmeats as “an especial thing against the gout, if every day for a certain space a reasonable quantitie thereof be eaten fasting.” In Yorkshire, tansy and caraway seeds were traditionally used in biscuits served at funerals.[11]

During the Restoration, a "tansy" was a sweet omelette flavoured with tansy juice. In the BBC documentary "The Supersizers go ... Restoration", a chef described the flavour as "fruity, sharpness to it and then there's a sort of explosion of cool heat a bit like peppermint." [25] However, the programme's presenter Sue Perkins experienced tansy toxicity.

According to liquor historian A. J. Baime, in the 19th century Tennessee whiskey magnate Jack Daniel enjoyed drinking his own whiskey with sugar and crushed tansy leaf.

For many years, tansy has been used as a medicinal herb despite its toxicity. 19th-century Irish folklore suggests bathing in a solution of tansy and salt as a cure for joint pain.[12] A bitter tea made with tansy flowers has been used for centuries as an anthelmintic to treat parasitic worm infestations, and tansy cakes were traditionally eaten during Lent because it was believed that eating fish during Lent caused intestinal worms.[11] Various Tanacetum species are used ethmomedically to treat migraine, neuralgia and rheumatism and as anthelmintics. Traditionally, tansy was often used for its emmenagogue effects to bring on menstruation or end an unwanted pregnancy, and pregnant women are advised to not use this herb.[26] Research published in 2011 identified 3,5-dicaffeoylquinic acid (3,5-DCQA) and axillarin in tansy as antiviral compounds that are active against herpes simplex virus.[27] 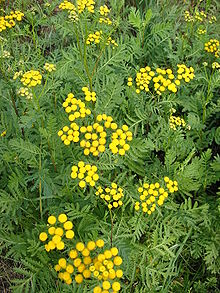 In England, bunches of tansy were traditionally placed at windows to keep out flies. Sprigs were placed in bedding and linen to drive away pests.[28]

Tansy has been widely used in gardens and homes in Melbourne, Australia to keep away ants.

Some traditional dyers use tansy to produce a golden-yellow colour.[29] The yellow flowers are dried for use in floral arrangements.

Tansy is also used as a companion plant, especially with cucurbits like cucumbers and squash, or with roses or various berries. It is thought to repel ants, cucumber beetles, Japanese beetles, squash bugs, and some kinds of flying insects, among others.

Dried tansy is used by some bee-keepers as fuel in a bee smoker.

Tansy in art and literature

And where the marjoram once, and sage, and rue,
And balm, and mint, with curl'd-leaf parsley grew,
And double marigolds, and silver thyme,
And pumpkins 'neath the window climb;
And where I often, when a child, for hours
Tried through the pales to get the tempting flowers,
As lady's laces, everlasting peas,
True-love-lies-bleeding, with the hearts-at-ease,
And golden rods, and tansy running high,
That o'er the pale-tops smiled on passers-by.