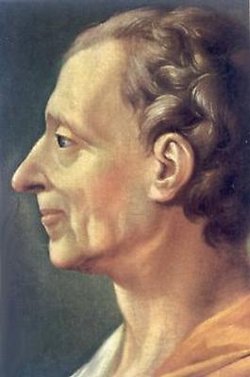 Charles-Louis de Secondat, baron de La Brède et de Montesquieu (Eng. IPA|/ˈmɒntəˌskyu/; , in – , ), was a French social commentator and political thinker who lived during the Era of the Enlightenment. He is famous for his articulation of the theory of , taken for granted in modern discussions of and implemented in many s throughout the world. He was largely responsible for the popularization of the terms and .

After having studied at the , he married. His wife, Jeanne de Latrigue, a , brought him a substantial when he was 26. The next year, he inherited a fortune upon the death of his uncle, as well as the title Baron de and in the of Bordeaux. By that time, had declared itself a in the wake of its (1688–89), and had joined with in the to form the . In 1715 the long-reigning died and was succeeded by the weaker and more feeble . These national transformations impacted Montesquieu greatly; he would later refer to them repeatedly in his work.

Soon afterwards he achieved literary success with the publication of his "Lettres persanes" ("", 1721), a based on the imaginary correspondence of a Persian visitor to , pointing out the absurdities of contemporary society. He next published "Considérations sur les causes de la grandeur des Romains et de leur décadence" ("Considerations on the Causes of the Grandeur and Decadence of the Romans", 1734), considered by some scholars a transition from "The Persian Letters" to his master work. "De l'Esprit des Lois" ("") was originally published anonymously in 1748 and quickly rose to a position of enormous influence. In France, it met with an unfriendly reception from both supporters and opponents of the regime. The Roman Catholic Church banned "l'Esprit" – along with many of Montesquieu's other works – in 1751 and included it on the papacy's notorious Index. It received the highest praise from the rest of Europe, especially Britain.

Montesquieu was also highly regarded in the British colonies in America as a champion of British liberty (though not of American independence). Political scientist Donald Lutz found that Montesquieu was the most frequently quoted authority on government and politics in colonial pre-revolutionary British America. ["The Relative Influence of European Writers on Late Eighteenth-Century American Political Thought," "American Political Science Review" 78,1(March, 1984), 189-197.] Following the American , Montesquieu's work remained a powerful influence on many of the American Founders, most notably of , the "Father of the Constitution." Montesquieu's philosophy that "government should be set up so that no man need be afraid of another" reminded Madison and others that a free and stable foundation for their new national government required a clearly defined and balanced separation of powers. Besides composing additional works on society and politics, Montesquieu traveled for a number of years through including and , spending a year in and 18 months in before resettling in . He was troubled by poor eyesight, and was completely blind by the time he died from a high fever in 1755. He was buried in the .

Montesquieu's most influential work divided French society into three classes (or "", a term he coined): the , the , and the . Montesquieu saw two types of governmental power existing: the and the . The administrative powers were the executive, the , and the . These should be separate from and dependent upon each other so that the influence of any one power would not be able to exceed that of the other two, either singly or in combination. This was radical because it completely eliminated the three Estates structure of the French Monarchy: the , the aristocracy, and the people at large represented by the Estates-General, thereby erasing the last vestige of a feudalistic structure.

Like many of his generation, Montesquieu held a number of views that might today be judged controversial. While he endorsed the idea that a woman could head a government, he held that she could not be effective as the head of a family. He firmly accepted the role of a hereditary aristocracy and the value of . His views have also been abused by modern revisionists; for instance, even though Montesquieu was ahead of his time as an ardent opponent of , he has been quoted out of context in attempts to show he supported it.Fact|date=February 2007

One of his more exotic ideas, outlined in "" and hinted at in "Persian Letters", is the climate theory, which holds that may substantially influence the nature of man and his society. He goes so far as to assert that certain climates are superior to others, the temperate climate of France being ideal. His view is that people living in very warm countries are "too hot-tempered," while those in northern countries are "icy" or "stiff." The climate of middle Europe is therefore optimal. On this point, Montesquieu may well have been influenced by a similar pronouncement in The Histories of Herodotus, where he makes a distinction between the 'ideal' temperate climate of Greece as opposed to the overly cold climate of Scythia and the overly warm climate of Egypt. This was a common belief at the time, and can also be found within the medical writings of Herodotus' times, including the 'On Airs, Waters, Places' of the Hippocratic corpus. One can find a similar statement in "Germania" by , one of Montesquieu's favorite authors. In a different perspective , in his analysis of Montesquieu's work [L. Althusser, "Politics and History: Montesquieu, Rousseau, Marx", NLB, 1972. ] , has pointed out the seminal character of the inclusion of material factors, such as climate, in the explanation of social dynamics and political forms.