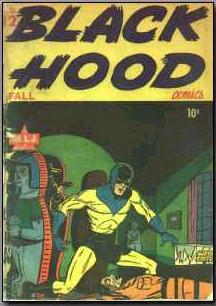 Black Hood Comics was a published by , from Winter 1943 to Summer 1946, running eleven issues, and featuring the titular character.

Created in 1940, in the October issue of "Top-Notch Comics" by Harry Shorten (writer) and Al Camy (artist), the Black Hood was Patrolman Kip Burland, who (like the first Blue Beetle, Ghost Rider and the Guardian before him) assumed the role of costumed vigilante while off-duty.

:" [F] ramed for burglary by a villain called The Skull, [Burland] needed a cover to use while proving himself innocent," and adopted the role and costume of the Black Hood. "After clearing his name... he continued to use it because it enabled him to avoid all those entangling legal restrictions imposed on policemen in the pursuit of justice."

Popular from the start ("upstaging The Wizard, Top-Notch's first star" early on), the Black Hood also featured in "Jackpot Comics",but was notable for being "one of the few comic book characters ever to star in his own pulp magazine." "Black Hood Detective" began in 1941, and featured work from future Batman-artist , among others. With its second issue, "Black Hood Detective" was renamed "Hooded Detective", and the magazine provided the adventures of the Black Hood in illustrated prose, rather than comics form.

Acchieving popularity in the pages of MLJ's comics, the Black Hood gained his own comic title in 1943, named simply "Black Hood Comics". A continuation of an early title - "Hangman Comics" - the numbering of the new title began not with issue one, but with issue number nine, while the Hangman character continued to appear in the renamed comic. Other recurring stories and features in the comic include Gloomy Gus, Junior Flying Corps club, Roy and Dusty, Bentley of Scotland Yard, Flying Dragons and World Wonders.

Among the artists who worked on the comic, were , Bill Vigoda, Harry Sahle, Clem Weisbecker, Red Holmdale, Al Fagaly, and others.

This character is not the same as the later one called "", which was later used by under its imprint.