Orenstein & Koppel (normally abbreviated to "O&K") is a major German engineering company specialising in railway vehicles, escalators, and heavy equipment. It was founded on April 1, 1876 in Berlin by Benno Orenstein and Arthur Koppel.

Originally a general engineering company, O&K soon started to specialise in the manufacture of railway vehicles. The company also manufactured heavy equipment and escalators. O&K pulled out of the railway business in 1981. Its escalator-manufacturing division was spun off to the company's majority shareholder at the time, Friedrich Krupp AG Hoesch-Krupp, in 1996, leaving the company to focus primarily on construction machines.[1] The construction-equipment business was sold to New Holland Construction, at the time part of the Fiat Group, in 1999.[2][3] 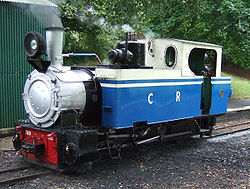 The Orenstein & Koppel Company was a mechanical-engineering firm that first entered the railway-construction field, building locomotives and other railroad cars.

First founded in 1892 in Schlachtensee, in the Zehlendorf district of Berlin, and known as the Märkische Lokomotivfabrik, the O&K factories expanded to supply the Imperial German Army under Kaiser Wilhelm II with field-service locomotives, or Feldbahn. O&K supplied all manner of railway equipment to the Army. Because of strained capacity at the Schlachtensee shops, work transferred in 1899 to a site in Nowawes, later Babelsberg, near Potsdam. Around 1908, O&K acquired the firm of Gerlach and König in Nordhausen, building petrol and diesel locomotives there under the trade mark "Montania". 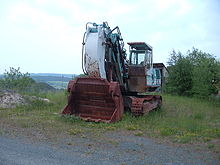 In the early years of the 20th century, O&K built bucket chain trenchers, at first from wood, and—after 1904—completely from steel. These were propelled by steam or oil engines. O&K also made railway trenchers for work in heavy soils.

In the First World War, O&K built railway engines and cars of all sizes for the German government. With the collapse of Imperial Germany in November 1918, the victorious Allies put further restrictions on German manufacturing and military capacity, seizing all army Feldbahn engines as per the terms of the Versailles Treaty that ended the First World war. The treaty also removed access to export markets; at the end of 1925, work stopped for three months as a result of the lost business. By 1935, business had recovered and the company produced 5,299 locomotives.[citation needed] After the war, O&K's American subsidiary, the Orenstein-Arthur Koppel Company, was seized by the Alien Property Custodian and sold at an auction where only United States citizens were allowed to place bids.[4]

In 1922 they manufactured their first continuous-track steam shovel. In 1926, diesel engines replaced steam engines; the company converted earlier steam units to diesel power as the need arose. O&K merged with a kerosene-engine builder, selling the engines under the O&K banner. 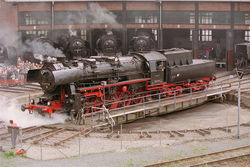 Kriegslokomotives were built by O&K

At the Spandau factory, O&K built cable-operated excavators and bucket-wheel excavators for use in the lignite coal mines of eastern Germany. Under the Aryanisation scheme of Adolf Hitler's Nazi Germany, the Orenstein family's shares in the company were forcibly sold in 1935; Orenstein and Koppel was placed under trust administration, and the Babelsberger works were taken over and renamed in 1941. O&K existed in name only, but more commonly used the abbreviation MBA (Maschienenbau und Bahnbedarf AG).

After heavy bomb attacks on Berlin caused a fire in the company's plant-administration buildings, factory production minister Albert Speer redistributed work and factories around the country to lessen the risk from a single attack. For the remainder of World War II, no more locomotives were built in Berlin. Four hundred and twenty-one locomotives already under construction were shifted to Prague to protect the existing factories. During the war, O&K provided 400 Class 52 locomotives.

After the end of the war, the locomotive plant in Nordhausen went idle. Under the German Democratic Republic, O&K changed its name to the VEB Company, and resumed heavy mechanical manufacturing at Nordhausen, producing cable-operated excavator shovels, among other things.

By 1946, the Babelsberg factory resumed production of locomotive boilers, and one year later the plant delivered its first postwar locomotive.

The German Democratic Republic nationalised the railroads and rolling stock manufacturers. The O&K plants in Babelsberg were renamed the LOWA Lokomotiv Plant Karl Marx (LKM). The LKM became the sole manufacturer of diesel locomotives for the GDR, such as the large DRG V180. In the late 1950s, the plant developed steam and diesel engines for the Deutsche Reichsbahn narrow-gauge railways, building approximately 4,160 engines.

By 1964, the company had expanded into air-conditioning and refrigeration technology.

In West Germany, the enterprise resumed operation after World War II in 1949 under the name Orenstein & Koppel AG, with headquarters in Berlin. In 1950, it incorporated under that name after merging with the Lübecker Crane Company. After the construction of the Berlin Wall in 1961, the head office moved to Dortmund.

By the mid-1970s, the enterprise had grown steadily. In 1972, O&K had five working plants: West Berlin, Dortmund, Hagen, Hattingen/Ruhr, and Lübeck; it maintained a central spare-parts service in Bochum. That year, the company had 8,530 employees. The company had 24 business and sales offices in West Germany, and agencies on all five populated continents.

After 1964, the railway-manufacturing unit was separated from the other production units.

The railway business was transferred to Bombardier, which continues to manufacture rolling stock in Berlin. The Babelsberg site became an industrial park.

The escalator-manufacturing division was sold to the company's majority shareholder at the time, Friedrich Krupp AG Hoesch-Krupp, in 1996.[1]

The construction-equipment business was sold to New Holland Construction, at the time part of the Fiat Group, in 1999.[2][3]