An example of a Deterministic Finite Automaton that accepts only binary numbers that are multiples of 3. The state S0 is both the start state and an accept state.

In the theory of computation and automata theory, a deterministic finite state machine—also known as deterministic finite automaton (DFA)—is a finite state machine accepting finite strings of symbols. For each state, there is a transition arrow leading out to a next state for each symbol. Upon reading a symbol, a DFA jumps deterministically from a state to another by following the transition arrow. Deterministic means that there is only one outcome (i.e. move to next state when the symbol matches (S0 -> S1) or move back to the same state (S0 -> S0)). A DFA has a start state (denoted graphically by an arrow coming in from nowhere) where computations begin, and a set of accept states (denoted graphically by a double circle) which help define when a computation is successful.

DFAs recognize exactly the set of regular languages which are, among other things, useful for doing lexical analysis and pattern matching. [1] A DFA can be used in either an accepting mode to verify that an input string is indeed part of the language it represents, or a generating mode to create a list of all the strings in the language.

A DFA is defined as an abstract mathematical concept, but due to the deterministic nature of a DFA, it is implementable in hardware and software for solving various specific problems. For example, a software state machine that decides whether or not online user-input such as phone numbers and email addresses are valid can be modeled as a DFA. [2] Another example in hardware is the digital logic circuitry that controls whether an automatic door is open or closed, using input from motion sensors or pressure pads to decide whether or not to perform a state transition (see: finite state machine).

DFAs can be built from nondeterministic finite-state machines through the powerset construction.

A deterministic finite automaton without accept states and without a starting state is known as a transition system or semiautomaton.

The following example is of a DFA M, with a binary alphabet, which requires that the input contains an even number of 0s. 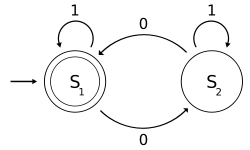 The state diagram for M

A DFA representing a regular language can be used either in an accepting mode to validate that an input string is part of the language, or in a generating mode to generate a list of all the strings in the language.

In the accept mode an input string is provided which the automaton can read in left to right, one symbol at a time. The computation begins at the start state and proceeds by reading the first symbol from the input string and following the state transition corresponding to that symbol. The system continues reading symbols and following transitions until there are no more symbols in the input, which marks the end of the computation. If after all input symbols have been processed the system is in an accept state then we know that the input string was indeed part of the language, and it is said to be accepted, otherwise it is not part of the language and it is not accepted.

The generating mode is similar except that rather than validating an input string its goal is to produce a list of all the strings in the language. Instead of following a single transition out of each state, it follows all of them. In practice this can be accomplished by massive parallelism (having the program branch into two or more processes each time it is faced with a decision) or through recursion. As before, the computation begins at the start state and then proceeds to follow each available transition, keeping track of which branches it took. Every time the automaton finds itself in an accept state it knows that the sequence of branches it took forms a valid string in the language and it adds that string to the list that it is generating. If the language this automaton describes is infinite (ie contains an infinite number or strings, such as "all the binary string with an even number of 0s) then the computation will never halt. Given that regular languages are, in general, infinite, automata in the generating mode tends to be more of a theoretical construct[citation needed].

DFA as a transition monoid

Alternatively a run can be seen as a sequence of compositions of transition function with itself. Given an input symbol

, one may write the transition function as

, using the simple trick of currying, that is, writing δ(q,a) = δa(q) for all

. This way, the transition function can be seen in simpler terms: it's just something that "acts" on a state in Q, yielding another state. One may then consider the result of function composition repeatedly applied to the various functions δa, δb, and so on. Using this notion we define

. Given a pair of letters

, one may define a new function

denotes function composition. Clearly, this process can be recursively continued. So, we have following recursive definition

where ε is empty string and

is defined for all words

. Repeated function composition forms a monoid. For the transition functions, this monoid is known as the transition monoid, or sometimes the transformation semigroup. The construction can also be reversed: given a

, one can reconstruct a δ, and so the two descriptions are equivalent.

DFAs are one of the most practical models of computation, since there is a trivial linear time, constant-space, online algorithm to simulate a DFA on a stream of input. Also, there are efficient algorithms to find a DFA recognizing:

Because DFAs can be reduced to a canonical form (minimal DFAs), there are also efficient algorithms to determine:

DFAs are equivalent in computing power to nondeterministic finite automata (NFAs). This is because, firstly any DFA is also an NFA, so an NFA can do what a DFA can do. Also, given an NFA, using the powerset construction one can build a DFA that recognizes the same language as the NFA, although the DFA could have exponentially larger number of states than the NFA.

On the other hand, finite state automata are of strictly limited power in the languages they can recognize; many simple languages, including any problem that requires more than constant space to solve, cannot be recognized by a DFA. The classical example of a simply described language that no DFA can recognize is bracket language, i.e., language that consists of properly paired brackets such as word "(()())". No DFA can recognize the bracket language because there is no limit to recursion, i.e., one can always embed another pair of brackets inside. It would require an infinite amount of states to recognize. Another simpler example is the language consisting of strings of the form anbn—some finite number of a's, followed by an equal number of b's.