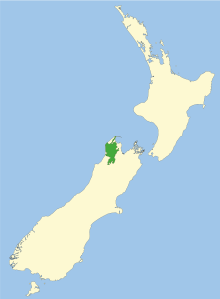 The extents of the park.

Kahurangi National Park is a national park in the northwest of the South Island of New Zealand. It was gazetted in 1996 and covers 4,520 km². It is the second largest of New Zealand's fourteen national parks. It was formed from what was called the North-west Nelson Forest Park.

Kahurangi Point, regarded as the boundary between the West Coast and Tasman Regions, is located in the park, as are the Heaphy Track and Mount Owen.

The park is administered by the Department of Conservation. Tramping, rafting and caving are popular activities in the park. After being prohibited for several years, mountainbiking was allowed on the Heaphy Track on a trial basis for the winters of 2011, 2012 and 2013. The effect of the cyclists on trampers and the wildlife will determine whether the trial continues or not.

In addition to ongoing conservation work by the Department of Conservation, there is a community initiative that aims "to implement, in partnership with the Department of Conservation, a conservation strategy to bring about the protection and/or return of endangered and threatened flora and fauna to the Flora Stream catchment area in Kahurangi National Park. This will enhance the experience for all visitors to this popular area, resulting in wider community appreciation and use of the Park."[1] "The society now has approximately 30 kilometres of trap lines, with all traps at 100 metre spacing. Also a wasp eradication programme is in place. Bird monitoring is also part of the society's programme."[2]