Desfina (Greek: Δεσφίνα) is a town and a former municipality in the southern part of Phocis, Greece. Since the 2011 local government reform it is part of the municipality Delphi, of which it is a municipal unit.[1] At the 2001 census, its population was 2,431. It is found in foot of mountain Kirfis in altitude 680m. and it occupies an extent of 200.000 str. roughly which is extended up to the Corinthian Gulf. Desfina is built amphitheatrically and is located about 200 kilometres of Athens, roughly 35 kilometres of Livadia, 16 kilometres of Antikyra, 30 kilometres of Amfissa, 18 kilometres of Itea and roughly 30 kilometres of Delphi and Arachova.

Desfina has been inhabited since antiquity, when it was called Echedamia.

One of the most important rebels of the Greek revolution, Bishop Isaias of Salona, fought for the liberation of Desfina until his execution by the Turks on 22 April 1821 and encouraged Athanasios Diakos for the battle of Alamana. Also, Isaias gave the signal for the beginning of revolution of Central Greece at the region of Prophet Daniel. His residence is found in Desfina and has been converted to a museum. In Desfina there is the Monastery of Honest Precursor which was distinguished at the revolution on 1821 as well as the very important Byzantine monument, the temple of Brigadiers near to the church of Saint Haralampos that dates to the 12th century.

The economy of Desfina is based on Aluminium of Greece (Prefecture Viotia), on public services (Desfina - Itea - Amfissa), on the various cultures and more generally on the Rural sector. In the past, before the creation of Aluminium of Greece, the locals were mainly sustained by animal breeding. They began from the village with certain money which they had gathered and their destination was to find animals (mainly sheep, goats, calfs) to buy. Their aim was to nourish and to sell they, in price where they would win some money. This was the main occupation of persons that lived in the region before from at least 60 years. Then, with the creation of factory in 1960, employment was provided to individuals from Desfina, Itea, Stiri, Distomo etc. most of whom preferred to deal in the factory, because of the job security it offered.

Various products that often attract individuals from distant parts are produced at Desfina. The most important products in the region are the following:

The Christmas and the Easter are celebrated with particular way mainly in villages and small town. Desfina is a town where the customs, the traditions and the feasts keep still to a large extent.[citation needed] The most important festivities take place in August. The most important event is the feast of Koimisis of Virgin Mary (Virgin Mary), which is celebrated on 15 August with events and festivals. 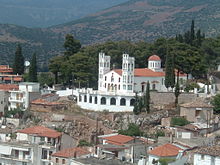 View of the church of Agios Haralambos. 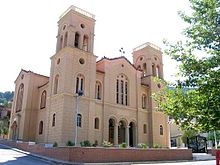 The church of Koimisi tis Theotokou.

There are several historical monuments and temples in Desfina as well as the central square which dates back to the 19th century. The square of Desfina is encircled by traditional cafes and taverns which offer a view of Mount Parnassos.

The Pan-Hellenic Championship Scramble took place in 2004 at Desfina. There were 93 participants.

The Cultural Association of Desfina The Progress was founded on 6 July 1979 and today numbers 200 members. The aim of the cultural association is the intellectual growth and moral culture, the promotion of spirit of culture and humanitarian bond between the members as well as contribution in the configuration of environment.

i) The Municipal Chorus of Desfina which includes two departments, for adults and children respectively was founded in 1999. ii) A basketball - volleyball court was built in 1999 iii) A modern ground of football 5x5 with synthetic sod was built in 2001 iv) A complete and modern gym was established in 2005

The historical athletic team of Desfina called "Hsaias" was founded in 1973 and represents the Municipality of Desfina in local tournaments. From 1973 up to 1985 the team participated in the Fthiotidofokidas Championship where winning 2 championships, one in 1976 going up from the C in the B category and other in 1978 when it rose from the B to the A category. From 1985 and since then it has participated in the championship of E.P.S. Fokida. In 1986 it gained the cup of Fokidas and nominated Champion A of Category, while lost the same year the rise in the D' National in baraz. A rise that it gained festive final in 1991 when conquered also again the championship, one year where the association spending enough money brought many "foreign" footballers. The next year that fought in the D' National it accomplished it reaches in final the Bowl failing however this time it raises for second time in his history the Bowl. This moment the team is in A amateur category with main opponents Asteras Iteas and Fokikos Amfissas.