Man-at-arms
This article is about the medieval term for a soldier. For the Masters of the Universe character, see Man-At-Arms. 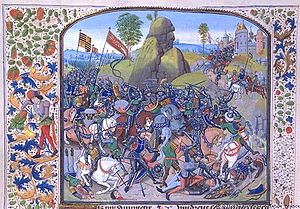 Man-at-arms (also called armsman or coistrel) was a term used from the High Medieval to Renaissance periods to describe a soldier, almost always a professional warrior in the sense of being well-trained in the use of arms, who served as a fully armoured heavy cavalryman.[1] It could refer to knights or noblemen, and to members of their retinues or to mercenaries in companies under captains. Such men could serve for pay or through a feudal obligation. The terms knight and man-at-arms are often used interchangeably, but while all knights certainly were men-at-arms, not all men-at-arms were knights.

In the Early Medieval period any well-equipped horseman could be described as a 'knight,' or miles in Latin.[2] In the course of the 12th century knighthood became a social rank with a distinction being made between milites gregarii (non-noble cavalrymen) and milites nobiles (true knights).[3] As a fully armoured cavalryman could be of a lesser social status than a knight, an alternative term describing this type of soldier came into use which was "man-at-arms." The term man-at-arms thus primarily denoted a military function, rather than a social rank. The military function that a man-at-arms performed was serving as a fully armoured heavy cavalryman; though he could, and in English armies often did, also fight on foot. The man-at-arms could be a wealthy mercenary of any social origins, but more often had some level of social rank based on income, usually from land. A serjeant-at-arms, an esquire (a man wealthy enough to be a knight but who was not because he did not want the costs and responsibilities of that rank), a knight bachelor, a knight banneret and all grades of nobility usually served as men-at-arms when called to war. Throughout the Medieval period and into the Tudor Age the armour of the man-at-arms became progressively more effective and expensive; indeed, Edward I decreed that all his men-at-arms should be mounted on equus coopertus, that is armoured, or barded, horses.[4] The greater the number well-equipped men a nobleman or knight had in his retinue, the better his social standing.

The social stratification of men who served as men-at-arms is illustrated by their rates of pay on campaign, in the mid 1340s a knight was paid 2 shillings a day, an ordinary man-at-arms was paid half this amount; for comparison a foot archer received 2 or 3 pence (12 pennies to the shilling). A man-at-arms was also remunerated differentially according to the quality of his principal war-horse, if the horse was to die or was killed in battle. An ordinary esquire might own a war-horse worth only 5 pounds whilst a great nobleman might own a horse worth up to 100 pounds.[5]

Social status also affected the types of military service performed by men-at-arms. Garrison duty was considered unattractive and was often carried out by soldiers of lesser status. For example the English garrison in the Scottish town of Roxburgh in 1301 consisted of just three knights compared to twenty seven men-at-arms of lesser status.[6]

Although the social structure of the Anglo-Norman society of England was relatively rigid, one of the easiest ways for a man to improve his social rank was through military service; another method was through the church. In the Norman states, unlike in many other contemporary societies, the knighting of men of common birth who had demonstrated ability and courage on the field was possible. Although rare, some non-knightly men-at-arms did advance socially to the status of knights. The knighting of squires and men-at-arms was sometimes done in an ignoble manner, simply to increase the number of knights within an army (such practice was common during the Hundred Year's War). In chivalric theory any knight could bestow knighthood on another, however, in practice this was usually done by sovereigns and the higher nobility. It is recorded that the great mercenary captain Sir John Hawkwood knighted a number of his followers, as many as twenty on one occasion, though he could reasonably be expected to provide the income his created knights required to maintain their new status.[7]

The fully armoured man-at-arms was gradually replaced in the course of the 16th century by later cavalry types, the demi-lancer and the cuirassier.

The last major battle in which English men-at-arms were prominent was fought against a Scottish army in 1547 at Pinkie Cleugh. The outnumbered Scots cavalry were easily driven off by the English horse (the Scots cavalry having lost heavily in an engagement the day before), the Scots then made a sudden advance with their massed pikemen. To slow their onset and give time for the English infantry to receive them the English heavy horse (men-at-arms and demi-lancers) were thrown against the pikes. The English cavalry crashed into the pikemen with great elan but sustained considerable losses. However, they halted the Scots attack, buying time for the English infantry and artillery to deploy effectively; the battle resulted in a heavy defeat for the Scots.[8] 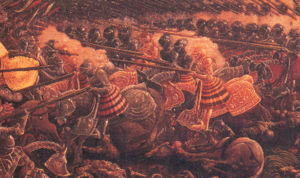 In some countries, such as France, the men-at-arms (gens d'armes) became a paramilitary with police duties.

There, a military corps having such duties was first created in 1337 and was placed under the orders of the Constable of France (connétable), and therefore named connétablie. In 1626 after the abolition of the title of connétable, it was put under the command of the Maréchal of France, and renamed Maréchaussée. Its main mission was protecting the roads from highwaymen.