A corn dog is a hot dog sausage coated in a thick layer of cornmeal batter and deep fried in oil, although some are baked. Almost all corn dogs are served on wooden sticks, though some early versions had no stick.

There is some debate as to the exact origins of the corn dog; they appeared in some ways in the US by the 1920s, and were popularized nationally in the 1940s. A US patent filed in 1927, granted in 1929, for a Combined Dipping, Cooking, and Article Holding Apparatus, describes corn dogs, among other fried food impaled on a stick; it reads in part:[1][2]

I have discovered that articles of food such, for instance, as wieners, boiled ham, hard boiled eggs, cheese, sliced peaches, pineapples, bananas and like fruit, and cherries, dates, figs, strawberries, etc., when impaled on sticks and dipped in batter, which includes in its ingredients a self rising flour, and then deep fried in a vegetable oil at a temperature of about 390°F., the resultant food product on a stick for a handle is a clean, wholesome and tasty refreshment.

In 300 Years of Kitchen Collectibles, author Linda Campbell Franklin states that a "Krusty Korn Dog baker" machine appeared in the 1929 Albert Pick-L. Barth wholesale catalog of hotel and restaurant supplies. The 'korn dogs' were baked in a corn batter and resembled ears of corn when cooked.[3]

An article in The New York Times made reference to "corn dog" stands as early as 1947.[4] A number of current corn dog vendors lay claim that credit for the invention and/or popularization of the corn dog. Carl and Neil Fletcher lay such a claim, having introduced their "Corny Dogs" at the Texas State Fair sometime between 1938 and 1942.[3] The Pronto Pup vendors at the Minnesota State Fair claim to have invented the corn dog in 1941.[3][5] Cozy Dog Drive-in, in Springfield, Illinois, claims to have been the first to serve corn dogs on sticks, in 1946.[6] Also in 1946, Dave Barham opened the first location of Hot Dog on a Stick at Muscle Beach, Santa Monica, California.[7] 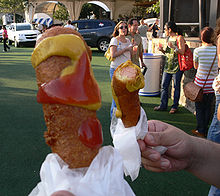 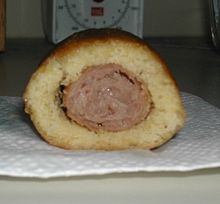 Corn dogs are often served as street food or as fast food. Some vendors or restaurateurs dip and fry their dogs just before serving.[8] Corn dogs can also be found at almost any supermarket in North America as frozen food that can be heated and served. Some corn dog purveyors sell these premade frozen corn dogs which have been thawed and then fried again or browned in an oven. Premade frozen corn dogs can also be microwaved, but the cornbread coating will lack texture.[9][10][11] Corn dogs may be eaten plain or with a variety of condiments, such as ketchup, mustard, relish and mayonnaise.

Both vegetarian corn dogs and corn dog nuggets are made as meatless alternatives by many of the same companies that produce veggie dogs.

A breakfast version of the corn dog consists of a breakfast sausage deep-fried in a pancake batter.

In Argentina they are called panchukers and are sold mostly around train stations, and are more popular in the inner country cities. They are often consumed on the street, and may contain cheese. They are served with a number of sauces.

In Australia, a hot dog sausage on a stick, deep fried in batter, is known as a Dagwood Dog or Pluto Pup or Dippy Dog, depending on region. Variants exist that use wheat-based or corn-based batters.[12] These are not to be confused with the British and Australian battered sav, a saveloy deep fried in a wheat flour based batter, as used for fish and chips, which generally does not contain cornmeal.[13] In New Zealand and South Korea, a similar battered sausage on a stick is called a "hot dog", whereas a "frankfurter" sausage in a long bun is referred to as an "American hot dog". In Japan, something like a corn dog can be found at many supermarkets and convenience stores as "American Dogs" (katakana:アメリカンドッグ) for their American origin. These American Dogs, however use a wheat-flour based batter with no cornmeal at all.

In Canada, corn dogs may be referred to as "pogo sticks", or "pogos", after a popular brand name.

Another version comes with either melted cheese between the hot dog and the breading or the hot dog is replaced with a cheese-filled hot dog.

Yet another version is the "cornbrat" (or "corn brat"), which is a corn dog made with bratwurst instead of a wiener or hot dog.[14]

Hot dogs can also so be covered in a potato and egg coating; fried and served on a stick like a corn dog. In effect, the cornbread component is replaced with a latke.[15]

Small corn dogs, known as "corn puppies," "mini corn dogs," or "corn dog nuggets," are a variation served in some restaurants, generally on the children's menu or at fast food establishments. A serving includes multiple pieces, usually 10.[16] In contrast to their larger counterparts, corn puppies are normally served stickless as finger food.

National Corndog Day is a celebration of the corn dog, tater tots, and American beer that occurs on the first Saturday of March of every year.[17]