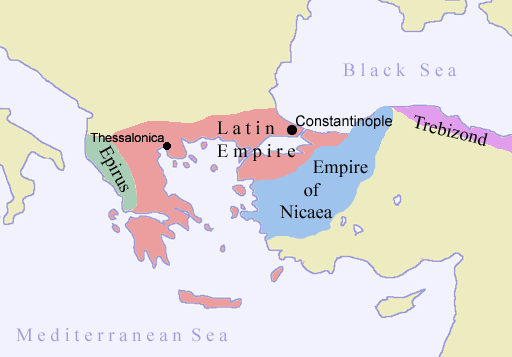 image_map_caption = Trebizond amongst other successor states of the after the 4th Crusade.|
capital = Trebizond
common_languages = "(de facto)"
religion = |
leader1 = Alexios I Megas Komnenos
leader2 = David Megas Komnenos
year_leader1 = 1204 – 1222
year_leader2 = 1459 – 1461
title_leader = Emperor1
footnotes = 1 the full title of the Trapezuntine emperors after 1261 was "the faithful "" and "Autokrator" of All the East, the Iberians and "

The Empire of Trebizond ( _el. polytonic|Βασίλειον τῆς Τραπεζοῦντος) was a Byzantine Greek successor state of the founded in 1204 as a result of the capture of by the . Queen provided troops to her relative Alexius I, who conquered the Pontic Greek cities of Trebizond, Sinope and . Since it was the last of the Greek successor states to the Byzantine Empire to fall to the Ottomans (1461), it is often known as "the last Greek Empire".

When Constantinople fell to the in 1204, the Empire of Trebizond was one of the three smaller Greek states that emerged from the wreckage, along with the and the . Alexios Komnenos, a grandson of the , and a son of Rusudan, daughter of , made his capital and asserted a claim to be the legitimate successor of the .

Emperor Andronikos I had been deposed and killed in 1185. His son Manuel was blinded and may have died of his injuries. The sources agree that Rusudan, the wife of Manuel and the mother of Alexios and David, fled Constantinople with her children to escape persecution by , Andronikos' successor. It is unclear whether Rusudan fled to Georgia or to the southern coast of the Black Sea where the family had its origins. There is some evidence that the Komnenian heirs had set up a semi-independent state centred on Trebizond before 1204.

The rulers of Trebizond called themselves "Megas Komnenos" ("Great Comnenus") and at first claimed the traditional Byzantine title of " and Autocrat of the Romans." After reaching an agreement with the restored Byzantine Empire in 1282, the official title of the ruler of Trebizond was changed to "Emperor and Autocrat of the entire East, of the Iberians and the Transmarine Provinces" and remained such until the Empire's end in 1461. The state is sometimes called the "Comnenian" empire from its ruling dynasty.

Trebizond initially controlled a contiguous area on the southern coast between Soterioupolis and Sinope, comprising the modern Turkish provinces of Sinop, Ordu, Giresun, Trabzon, Bayburt, Gümüşhane, Rize and Artvin. In the , the empire controlled , which included and on the Crimean peninsula. , the younger brother of Alexios, expanded rapidly to the west, occupying first Sinope, then Paphlagonia and (modern Samsun province and the coastal regions of Kastamonu, Bartın and Zonguldak) until his territory bordered the founded by . The expansion was short-lived however: the territories west of Sinope were lost to the Empire of Nicaea by 1206, and Sinope itself fell to the in 1214.

While Epirus effectively disintegrated in the 14th century, and the Nicaean Empire succeeded in retaking Constantinople and extinguishing the feeble , only to be conquered in 1453 by the , Trebizond managed to outlive its competitors in Epirus and Nicaea.

Trebizond was in continual conflict with the and later with the Ottoman Turks, as well as Byzantium, the Italian republics, and especially the Genoese. It was an more in title than in fact, surviving by playing its rivals against each other, and offering the daughters of its rulers, who were famed for their beauty, for marriage with generous dowries, especially with the Turkmen rulers of inland .

The destruction of Baghdad by in 1258 made Trebizond the western terminus of the , and under the protection of the s the city grew to tremendous wealth on the Silk Road trade. Among others, returned to Europe by way of Trebizond in 1295. Under the rule of Alexios III (1349&ndash;1390) the city was one of the world's leading trade centres and was renowned for its great wealth and artistic accomplishment.

The small Empire of Trebizond had been most successful in asserting itself at its very start, under the leadership of Alexios I (1204&ndash;1222) and especially his younger brother David, who died in battle in 1214. Alexios' second son Manuel I (1238&ndash;1263) had preserved internal security and acquired the reputation of a great commander, but the Empire was already losing outlying provinces to the Turkmen, and found itself forced to pay tribute to the Seljuks of Rum and then to the Mongols of Persia, a sign of things to come. The troubled reign of John II (1280&ndash;1297) included a reconciliation with the and the end of Trapezuntine claims to Constantinople. Trebizond reached its greatest wealth and influence during the long reign of Alexios II (1297&ndash;1330). Trebizond suffered a period of repeated imperial depositions and assassinations from the end of Alexios' reign until the first years of Alexios III, ending in 1355. The empire never fully recovered its internal cohesion, commercial supremacy or territory.

Manuel III (1390&ndash;1417), who succeeded his father Alexios III as emperor, allied himself with , and benefited from Timur's defeat of the Ottoman Turks at the in 1402. His son Alexios IV (1417&ndash;1429) married two of his daughters to , khan of the , and to , khan of the ; while his eldest daughter Maria became the third wife of the Byzantine Emperor . , who visited the city in 1437, reported that Trebizond had less than 4,000 troops.

John IV (1429&ndash;1459) could not help but see his Empire would soon share the same fate as Constantinople had suffered in 1453. The Ottoman Sultan first attempted to take the capital by sea in 1442, but high surf made the landings difficult and the attempt was repulsed. While was away laying siege to in 1456, the Ottoman governor of attacked Trebizond, and although defeated, took many prisoners and extracted a heavy tribute.

John IV prepared for the eventual assault by forging alliances. He gave his daughter to the son of his brother-in-law, , khan of the , in return for his promise to defend Trebizond. He also secured promises of help from the Turkish s of and Karamania, and from the king and princes of Georgia.

After John's death in 1459, his brother David came to power and misused these alliances. David intrigued with various European powers for help against the Ottomans, speaking of wild schemes that included the conquest of . Mehmed II eventually heard of these intrigues, and was further provoked to action by David's demand that Mehmed remit the tribute imposed on his brother.

Mehmed's response came in the summer of 1461. He led a sizeable army from Bursa, first to Sinope, whose emir quickly surrendered, then south across Armenia to neutralize Uzun Hasan. Having isolated Trebizond, Mehmed quickly swept down upon it before the inhabitants knew he was coming, and placed it under siege. The city held out for a month before the emperor David surrendered on , .

With the fall of Trebizond, the last remnant of the Roman Empire was extinguished.

*
*
*, a Scottish historical novelist, much of whose book "The Spring of the Ram" is set in Trebizond at the time of its fall.

* [http://www.karalahana.com/english/archive/history.html Brief History of Trabzon from ancient to Medieval]