for pre-modern history of Nara

Nara was the capital of Japan from 710 to 794, lending its name to the Nara period. According to the ancient Japanese book Nihon Shoki, the name "Nara" derived from the Japanese word narashita meaning "made flat".[1][2]

The temples of Nara remained powerful even beyond the move of the political capital to Heian-kyō in 794, thus giving Nara a synonym of Nanto (南都, "The Southern Capital"?).

In 2010, Nara celebrated the 1,300th anniversary of its ascension as Japan's imperial capital.[3]

In the modern age, as the seat of the prefectural government, Nara has developed into a local center of commerce and government. The city was officially incorporated on February 1, 1898.

The city of Nara lies in the north end of Nara Prefecture, directly bordering itself to Kyoto Prefecture in its north side. The city is 22.22 km from North to South, from East to West. As a result of the latest merger, effective April 1, 2005, that combined the villages of Tsuge and Tsukigase with the city of Nara, the city now borders Mie Prefecture directly to its east. The total area is 276.84 km².[4]

The downtown of Nara is on the east side of the ancient Heijō Palace site, occupying the northern part of what was called the Gekyō (外京), literally the outer capital area. Many of the public offices (e.g. the Municipal office, the Nara Prefectural government, the Nara Police headquarters, etc.) are located on Nijō-ōji (二条大路), while Nara branch offices of major nationwide banks are on Sanjō-ōji (三条大路), with both avenues running east-west.

The climate of Nara Prefecture is generally temperate, although there are notable differences between the north-western basin area and the rest of the prefecture which is more mountainous.

The basin area climate has an inland characteristic, as represented in the higher daily temperature variance, and the difference between summer and winter temperatures. Winter temperatures average approximately 3 to 5 °C (37 to 41 °F), and from 25 to 28 °C (77 to 82 °F) in the summer with highest readings reaching close to 35 °C (95 °F). There has not been a single year since 1990 with more than 10 days of snowfall recorded by Nara Local Meteorological Observatory.

The climate in the rest of the prefecture is that of higher elevations especially in the south, with −5 °C (23 °F) being the extreme minimum in winter. Heavy rainfall is often observed in summer. The annual accumulated rainfall totals as much as 3,000 to 5,000 mm (118.11 to 196.85 in), which is among the heaviest in Japan and indeed in the world outside the equatorial zone.

Spring and fall temperatures are temperate and comfortable. The mountainous region of Yoshino has been long popular for viewing cherry blossoms in the spring. In autumn, the southern mountains are also a popular destination for viewing fall foliage.

As of 2005, the city has an estimated population of 373,189 and a population density of 1,348 persons per km². There were 147,966 households residing in Nara. The highest concentraton of both households and population, respectively about 46,000 and 125,000, is found along the newer bedtown districts, along the Kintetsu line connecting to Osaka. There were about 3,000 registered foreigners in the city, of which Koreans and Chinese are the two largest groups with about 1,200 and 800 people respectively. There were slightly fewer than 1,200 deer in Nara in 2005.[4][5] 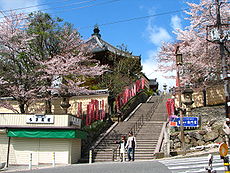 One of the entrances to Kofukuji Temple 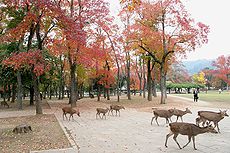 According to the legendary history of Kasuga Shrine, a mythological god Takemikazuchi arrived in Nara on a white deer to guard the newly built capital of Heijō-kyō. Since then the deer have been regarded as heavenly animals, protecting the city and the country.[8]

Tame deer roam through the town, especially in Nara Park. Snack vendors sell "shika sembei" (deer biscuits) to visitors so they can enjoy feeding the deer. Some of the deer have learned to bow in response to tourists' bows.[citation needed] They nudge, jostle, and even bite for food.

As of 2005, there are 16 high schools and 6 universities located in the city of Nara.

Nara Women's University is one of only two national women's universities in Japan.

Public elementary and junior high schools are operated by the city of Nara.

Public high schools are operated by the Nara Prefecture.

Private high schools in Nara include the Todaiji Gakuen, a private school founded by the temple in 1926.