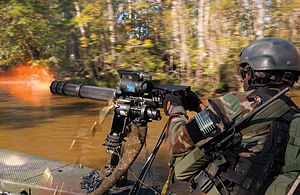 U.S. Special Warfare combatant-craft crewmen use a Gatling gun to lay down suppressing fire during a practice "hot" extraction of forces on a beach.

In military science, suppressive fire is a fire that degrades the performance of a target below the level needed to fulfill its mission. Suppression is usually only effective for the duration of the fire.[1] Suppressive fire is not always a direct form of fire towards targets; it can be an effective visual and audible distraction. It is one of three types of fire support, which is defined by NATO as “the application of fire, coordinated with the manoeuvre of forces, to destroy, neutralize or suppress the enemy.”

Before NATO defined the term, the British and Commonwealth armies generally used “neutralisation” with the same definition as suppression. NATO now defines neutralization as “fire delivered to render a target temporarily ineffective or unusable.”

Two US Navy crew chiefs look over the horizon with their .50-cal machine guns. Door gunners use machine guns to provide suppressive fire when the helicopter has to land in a hostile area.

The purpose of suppression is to stop or prevent a target from observing, shooting or moving. This is useful for tactical reasons, as a suppressed target will be unable to return fire upon vulnerable forces that are moving without cover. This enables forces to advance to new positions that offer more tactical advantages (e.g., a high point). For example, a US Marines article notes that "communication and suppressive fire are what enables movement on the battlefield, giving Marines the upper hand."[2] Suppressive fire may be used to enable a helicopter or boat to land or extract soldiers from a battle zone (the latter is called a "hot extraction").

The primary intended effect of suppressive fire is psychological. Rather than directly trying to kill enemy soldiers, it makes the enemy soldiers feel unable to safely perform any actions other than seeking cover. Colloquially, this goal is expressed as "it makes them keep their heads down" or "it keeps them pinned down". However, depending on factors including the type of ammunition and the target's protection, suppressive fire may cause casualties and/or damage to enemy equipment.

Heavy and continuous fire keeps an opponent suppressed and therefore limits the overall firepower of the enemy unit. If an enemy platoon has 30 soldiers, but only 15 are shooting back because the other 15 are lying flat because of suppressive fire, then that unit's firepower has been reduced by half. Suppressive fire also makes it harder for the enemy to be able to assess the situation clearly.

Suppressive fire is typically used as covering fire against targets in the close combat zone. However, suppressive fire delivered by artillery and other indirect fire means can be used to suppress targets of any type. NATO also defines '’’suppression of enemy air defences’’’ (SEAD), which has a broader definition and includes materiel damage.

Suppressive fire became possible with the advent of firearms or projectile weapons capable of rapid fire (particularly automatic weapons). However, its significance did not fully emerge until tactics evolved to combine firepower and manoeuvre between forces prepared to use cover instead of standing in the open.

World War I marked a step change because of the development of indirect fire techniques and the protection provided by trenches. By late 1915 the British Expeditionary Force realised effects of artillery fire could not smash an opening in German trench lines. They therefore developed artillery techniques to suppress the enemy in trenches to allow their infantry to approach them.[3] Thereafter suppression became the defining British artillery tactic, a barrage could suppress a line of front several miles wide.

Infantry tactics also evolved and suppression became a key element in ‘winning the fire fight’. However, suppression by infantry direct fire weapons is generally only tactically useful against targets that do not have mutual support from adjacent positions and ammunition stocks may only be available for several minutes of firing.

In World War II amphibious assaults, "naval warships would open fire with their main armaments at known or suspected enemy artillery, mortar, or machine gun positions, on or behind the landing beaches", "to suppress enemy fire from these positions which could be directed against the landing troops".[4]

Suppressive fire requires sufficient intensity over the target area. Intensity being the suppressive effect per unit of target area per unit of suppression time. Weapons vary widely in their suppressive capabilities, which are the threat signaled by the noise of projectiles in flight and their impact.

While a machine gun bullet may only have a suppressive effect within about 1 metre of its trajectory, because of the high rate of fire of a machine gun, machine guns are used for suppressive fire. In the United States Army, in the four-person "fireteam" (the smallest group of soldiers), an automatic rifleman provides suppressive fire with a M249 Squad Automatic Weapon. "Suppressive fire can also be delivered using other weapons such as assault rifles, but the volume and intensity of fire generated is less than that of machine guns, as the rifles overheat more rapidly and require reloading more often".[5]

AC-130H Spectre near Hurlburt Field, Florida in 1988. The side-firing Gatling guns can be seen on the side of the plane.

Suppressive fire with machine guns can also be provided by slow-moving close air support planes, such as the AC-130. The AC-130 is a heavily-armed aircraft with side-firing Gatling guns fixed facing down and aft along the left side. The AC-130 can spend long periods flying over their target area, in order to protect troops and bases.

Helicopters armed with side-firing machine guns use the weapons for suppressive fire when the helicopter needs to land in an area which contains enemy troops.

A single artillery shell may suppress a few hundred square meters around its burst. Furthermore sustained suppression over more than a few minutes may be difficult to achieve with small arms fire for logistic reasons, such as ammunition limits and the risk of machine gun barrels overheating. Air-delivered suppression fire is limited by payload limits and fuel capacity. As well, a too-long loiter time in the air for slow-flying aircraft increases the risk of attack by anti-aircraft weapons or fighter aircraft. In contrast, ground-based artillery can suppress an area for an extended period.