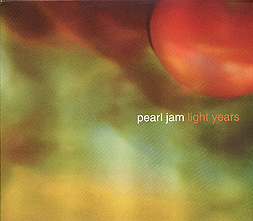 The song features lyrics written by frontman and music co-written by Vedder, guitarist , and guitarist . The song was re-worked from its original demo version as the band felt the original version was too similar to the song "".

With "Light Years", Mike McCready had written some music. We were excited about it for a while, but when we got down to recording it, it was too nice, too right there - it was a little too close to "Given to Fly". We changed the tempos, and then one night Mike and I, after working on it all day and getting frustrated, just flipped it backwards, and in about 35 minutes it became "Light Years", with words and everything. It still has a fairly contagious chorus and melody, but it's just sideways enough to make me happy.

Bassist on the song:

It sounded nothing like what it sounds like now. Mike had a couple of riffs, and Ed really sat down and tried to write to it. He initially had some problems, and one day he came in on his own and had some lyrics that were really heartfelt. He ended up completely rearranging the song. It got played a million different tempos and a million different angles on the drums. That was a hard song; probably more so on Matt's end just because it took so long.

At the in 2000, Vedder dedicated the song to Diane Muus from Sony Music, a friend of the band who passed away at the age of 33 in 1997. [ [http://www.twofeetthick.com/tour/cc/t2000.do "Pearl Jam Concert Chronology: 2000"] . TwoFeetThick.com.] He said there are "times you have got friends that don't fuck up at all and are great people. And then you just lose them for some reason. They are off the planet and you never had a chance to say goodbye. I only mention this because there was a person we used to know here and that was Diane and ah, we never got a chance to say goodbye. This is goodbye. And if you've got good friends, love them while they're here." [Vedder, Eddie. (Speaker). (2000). "6/12/00, Pinkpop, Landgraaf, Netherlands". [Audio Recording] . Epic.]

In 's review of the "Light Years" single, it was stated that "with [Pearl Jam's] more enduring and darker tones set in place, fans of Pearl Jam receive a raw and sincere taste of the band's new musical and melodic direction, perhaps ignited with the additional presence of newcomer Matt Cameron on drums."

The song was premiered live at the band's May 10, 2000 concert in Bellingham, . [ [http://pearljam.com/songs/song.php?song=LightYears "Pearl Jam Songs: "Light Years""] . pearljam.com.]