Law enforcement in the Netherlands

Law enforcement in the Netherlands

Logo of the Dutch police

From the end of 1945 until 1993, the Dutch police was composed of the gemeentepolitie (municipal police) and the rijkspolitie (state police).

In 1993 the police in the Netherlands was reorganised into 25 regiokorpsen (regional forces) and the Korps landelijke politiediensten (National police services force, KLPD).[1] In the event of serious emergencies, the police cooperates with the fire brigade, ambulance service and other government agencies in the security region corresponding to the police region.

Every regiokorps (regional force) is led by a korpschef (corps chief), a Hoofdcommissaris (Head Commissioner) who conducts the day-to-day police force management. Decisions about the principal law enforcement policies are made by a regional board, the so called Driehoek (triangle) whose chairman is the korpsbeheerder (force manager). The korpsbeheerder is usually the mayor of the largest municipality in the region. The other board members of the Driehoek are the korpschef and the (chief) prosecutor.

A region consists of several districts, each having a district chief. Each district consists of a number of local units, called basiseenheden (basic units) or teams.

Any police officer may also be deployed in a riot police Mobile Unit and nearly all officers attend a basic course to qualify them for such duties. Mobile units are called in to deal with serious public order offenses. Each police region has one or more units on stand-by for a total of 45 mobile units nationwide, each of which has about 50 members (including middle-ranking and senior officers). Nine units have also been trained to respond to incidents on maritime vessels.

The KLPD is also responsible for maintaining safety and combatting crime on the roads, waterways, railways and in the air. It also combats domestic and cross-border serious/organised crime, terrorism, commands all anti-terror police units and much of the police horse and dog teams; provides witness protection, and close-protection to members of Dutch Royal Family and others necessary person (e.g. diplomats and politicians) by the authorised minister.

The Koninklijke Marechaussee (KMar) (Royal Constabulary or Royal Military Police in English) is one of the four services of the Netherlands armed forces. It is a gendarmerie — that is, a military police organisation conducting the peacetime duties of a normal police force as well as being the police force to the armed forces. The Marechaussee is a fully military organisation under the responsibility of the Ministry of Defence, rather than the Chief of the Defence Staff (to secure independence and impartiality when enforcing military law).

The main civil tasks of the Marechaussee are to guarding Dutch national border (perform passport control), such as airports and seaports in order enforce 'alien legislation' (the entry of foreigners into the country), to escort money transports of the Central Bank of the Netherlands and to guard the main offices of the Bank. It also guards the royal palaces and the official residence of the prime minister. Special Protection Tasks Brigade (BSB) on dangerous person surveillance, can be used at the request of civil authorities as well. The Marechaussee also provides general policing at Schiphol airport vicinity, in addition to border control duty.

The Marechaussee also carries ceremonial duties at royal palaces, such as when new diplomats present their Letters of Credence to the queen, and for escorting important guests.

Military tasks are to guard military (including NATO) bases, to provide police service to military personnel, to assist military transports and civil and military law enforcement.

Ranks of the Dutch police

Within the Dutch police the following ranks are in use: [2]

Police trainee's are armed with a handgun if training for the constable level, if not the trainee performs his/hers duties unarmed.(pepperspray,handcuffs and baton)

In addition to these ranks, the so-called Buitengewoon Opsporings Ambtenaren (Special Investigation Officials) serve in the force. These are usually not a part of the above rank system. These special investigation officials may be authorised for specific duties such as parking duties or railway duties. Often it means they are authorised to uphold specific laws by fining transgressors, without the use of weapons or any other use of force.

Ranks of the Royal Marechaussee

The ranks within the Royal Marechaussee are:

Basically the equipment of every Dutch police officer consists of the following:

Personnel from the rank of Constable (Agent) and also some trainees (Aspirant) carry a firearm. The German-made Walther P5 is currently in use and has been since 1978. It was originally planned to be replaced by the SIG-SAUER PPNL, a 9x19mm version of the SIG Sauer P250, but the contract was cancelled due to the failure of several safety tests. At this time it is unclear which firearm will succede the Walther P5. 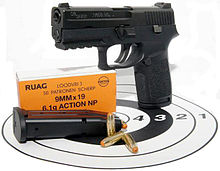 Article 2 of the Dutch Police law describes what the missions of the police are: "The task of the police is to, in subordination to the authorities and complying with applicable law, take care of the actual upholding of the legal order and to supply aid to those who need it." In practise this is comes down to four main missions.

Within the police, several departments are occupied with parts of these main tasks.

The communications centre is sometimes called the heart of the police force. All calls to the emergency telephone number 112 and the national police number 0900-8844 come in here around the clock.

The calls coming in to the communications centre are dispatched according to a number of criteria, resulting in so called priorities. Four priorities are defined.

The other two priorities are dispatched to neighbourhood teams.

For a number of years, the communications centres have used the Gemeenschappelijk Meldkamer Systeem (Common Communications Centre System, GMS). This system has a lot of functions. In the first place it functions as a plotting screen which displays every unit logged in. It also has a database function for procedures and phone numbers necessary for correctly executing police work and it links to the C2000 system and the CityGIS (GPS) system.

C2000 is the digital, untappable communications system and, with CityGIS, police cars can be tracked on a map using GPS, which can be reported to the communications centre using a VDO navigation system.

Old Dutch police emblem in stone, in front of the entrance of the Dutch Police Museum

In the Netherlands basic police work consists of the following tasks:

The Dutch government is keen to put more and more police "on the street". This means that automisation will have to be improved so that constables do not lose a lot of time noting all their observations on paper for later use. The uniformed policemen on the street are those of the patrol service.

Sometimes police patrols drive directly from the communications centre to the location where someone requested assistance. This can be a simple case of someone locking their keys inside their car, a complaint about litter or an incoveniently parked car. There are also more serious calls that need direct attention, like an accident with injuries, a stabbing, a burglary, vandalism; all events where the police has to act and reassure.

Surveillance is not only done from the patrol car, but also from a motorbike or a horse. Especially in crowded malls surveillance is often done on foot or (motor)bike. The men and women on the street have to permanently "keep their eyes open" to spot suspicious behaviour, such as someone walking around looking inside parked cars, cars without working lights or drunken cyclists.

Car owners are told that their lights are broken and why this is dangerous. A constable on foot may tell shop owners to put locks on their shelves outside to prevent shoplifting. If you report on a stolen bike, you'll be told what kind of bike locks are most effective.

The police in a municipality are available 24 hours every day for basic law enforcement. More and more often the police will visit schools to teach pupils about drug prevention, vandalism or sex on the internet. The police in a municipality make sure that what is forbidden isn't done, and that which is mandatory is actually done. They also make sure that anyone who asks for assistance gets it, supported by personnel from the district and the region. Since the early 90s several police regions have been working with neighbourhood teams called neighbourhood supervisors.

The police have powers "ordinary" people don't have. E.g. an officer can stop or arrest people, or look in a shopping bag for lifted items, or (on authorization of the assistant prosecutor) search a home for arms. The police also have the power to use force. This power is often called the "monopoly on force". The police is one of the few organisations in the Netherlands that are allowed to use force, the use of which is bound by many rules and preconditions.

The power to stop someone is the power that enables the arrest of someone. However, this power is not only granted to the police. The Code of Criminal Procedure, article 53, sub 1, reads:

In case of discovery in the act everyone is authorized to stop the suspect.

The term "in the act" meaning "when it just happened".

Stopping someone means holding the suspect while waiting for the arrival of the police. When someone is stopped, he is always brought to a police station for questioning.

The investigative powers of the police are for example described in the Police Law, the Arms and Munitions Law, the Opium Law, the Road Traffic Law 1994, the Entry Law and the Code of Criminal Procedure.

These powers are bound by very strict rules. Some of these powers may be applied by an officer himself, like the examples before. Other police powers, like wiretapping, observation or searching premises, can only be used after permission is granted by the examining judge.

Cooperation with other services

The police cooperates closely with support organisations that can continue providing support when the abilities of the police to do so come to an end. A few examples: