Monastir (Arabic: المـنسـتير‎ Al-Munastîr, from the Greek μοναστήριον "Hermit's Cell, monastery", called [lmiˈstiːr] in Tunisian Arabic), is a city on the central coast of Tunisia, in the Sahel area, (20 km south of Sousse and 162 km south of Tunis). Traditionally a fishing port, Monastir is now a major tourist resort. Its population is 41,400. It is the capital of Monastir Governorate. 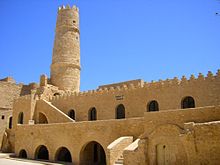 The Ribat in Monastir

Monastir was founded on the ruins of the Punic–Roman city of Ruspina. The city features a well preserved Ribat that was used to scan the sea for hostile ships. Several ulema came to stay in the Ribat of this peaceful city for contemplation. The Ribat was also one of the filming locations for Monty Python's Life Of Brian.

The city has Monastir (Habib Bourguiba) International Airport with flights from most Western European countries. It is run by Tepe Akfen Ventures Airport Holding (TAV).

Nouvelair has its head office in Monastir in the Dkhila Tourist Zone,[1][2] near the Hôtel Sahara Beach.[3]

Tunisian president Habib Bourguiba was born in Monastir, and his mausoleum is located in the city.

Monastir's north-eastern territories lead into a place called Route de la Falaise, through which you will reach its most notable suburb, Skanes, which is 6 miles from Monastir's town centre.[citation needed] Hugging Tunisia's coastline, Skanes is a holiday resort known mostly[by whom?] for its professional golf courses, never-ending strips of white, sandy beaches, clear blue sea and hotels that fuse Moorish architecture with modern designs, and is frequented throughout the Summer by tourists from around the World.[citation needed] As well as the relaxation and sports on offer they also come for the medina, where it is possible to sample fresh Tunisian cooking as well as bargaining for local goods.[citation needed]