Washing dishes
This article is about washing cooking utensils, dishes etc. For the period before Parliament is dissolved, see wash-up period.

Dish-washing (British English washing up) is the process of cleaning cooking utensils, dishes, cutlery and other items. This is either achieved by hand in a sink or using dishwasher and may take place in a kitchen, utility room, scullery or elsewhere. There are cultural divisions over rinsing and drying after washing.[citation needed]

Dish-washing is usually done using an implement for the washer to wield, unless done using an automated dishwasher. Commonly used implements include cloths, sponges, brushes or even steel wool when tackling particularly intransigent stuck-on food particles. As fingernails are often more effective than soft implements like cloths at dislodging hard particles, washing simply with the hands is also done and can be effective as well. Dishwashing detergent (aka "washing up liquid") is also generally used, but in principle all that is required is water. Rubber gloves are sometimes worn when washing dishes by people who are sensitive to hot water or dish-washing liquids, or who simply don't want to touch the old food particles. Many people also wear aprons.

A major variation in method is the temperature and state of the water. Asians and Latin Americans usually prefer running water because it is seen as being more hygienic as the water is not being reused, and usually use cold water. This is practical in environments where hot water is rarely available from the tap, and sinks are perceived as dirty surfaces (essentially a convenient drain). Westerners usually prefer standing hot water. This is practical in environments where hot water is cheaply and easily available, and sinks are perceived as clean surfaces (essentially a bowl with a convenient drainage device). In this method, the sink is usually first filled with dirty dishes (which may have already been rinsed and scraped to remove most food) and hot, soapy water. The detergent is added while the sink is filling with water, so a layer of suds forms at the top. Then the dishes are washed one by one and thoroughly rinsed to remove the grease dislodged by soap and mechanical action as well as the soap itself, then placed on a rack to begin drying, or dried and put away immediately by a second person. When the sink is empty, if there are more dishes to be washed they may be added to the same dishwater, or the sink may be drained and refilled if clean, hot dishwater is desired.[citation needed]

Separate tub in the sink

In some[which?] European countries, the dishes are generally washed in a separate tub placed inside the sink. This practice may have started as a matter of hygiene, as the kitchen sink was the only sink available for all the household water. The clothes were washed in the sink; the water used to wash the floor went down the sink, and so it made sense to separate the dishwater from the sink. There were two other possible reasons: First, kitchen sinks tended to be very large in a time when heating water was considered to be a major household expense; a tub used less water. Second, kitchen sinks were usually made of hard ceramic; any contact between the sink and plates was likely to cause chips, but a tub could be made of more forgiving material. Using a separate washing-up bowl in the sink also provides a place (down the gap between bowl and sink) to dispose of unfinished drink, soaking-water, etc. Unfortunately, using the gap for disposal of waste water requires extra vigilance to make sure food particles and other waste are not trapped under the bowl. 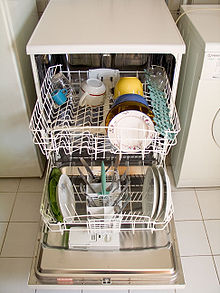 Where dishes are to be shared among many, such as in restaurants, sanitization is necessary and desirable in order to prevent spread of microorganisms.

Most institutions have a dish-washing machine which sanitizes dishes by a final rinse in either very hot water or a chemical sanitizing solution such as dilute bleach solution (50-100 parts per million chlorine; about 2ml of 5% bleach per litre of water, approximately one capful bleach per gallon water). Dishes are placed on large trays and fed onto rollers through the machine.[citation needed]

While not environmentally friendly, the use of bleach is critical to sanitation when large groups are involved: it evaporates completely, it is cheap, and it kills most germs. Cabinets, refrigerators, countertops, and anything else touched by people in a large group setting should be periodically wiped or sprayed with a dilute bleach solution after being washed with soapy water and rinsed in clean water.

In hand-washing, plastic brushes are recommended rather than washclothes or sponges, which can spread microorganisms.[2] Use of soap or sanitizer is mandatory in hand-washing in public food facilities.[3] 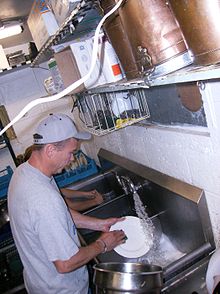 Washing dishes is considered the traditional punishment for being unable to pay a bill at a restaurant. However, evidence that this was actually practiced is anecdotal. In modern times, when most restaurants have automatic dishwashers, if a person is unable to pay a bill, the police are called.[citation needed]

National Dish Washer Appreciation Day is every June 3 of each year. The national association of dishwashers holds an annual break the plate dinner. Every dish washer is encouraged to break his plates and bowls after the banquet.[citation needed]

Traditionally, dishwashing is done by scrubbing the utensils with wet fabric dipped in scrub ash (abu gosok) to scrub away the dirt. The utensils are then rinsed in clean water and hung to drip dry. Scrub ash is specially made by burning wood for dishwashing.