Uznach is a municipality in the Wahlkreis (constituency) of See-Gaster in the canton of St. Gallen in Switzerland. 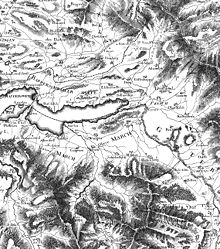 The Grafschaft of Uznach and the Herrschaft of Rapperswil on an 18th Century map.

Uznach is first mentioned in 741 as Uzinaa in a grant from a noble lady at Benken Abbey to the Abbey of Saint Gall. It was also mentioned later as both Uzinaha and Uzzinriuda.[3]

In the late 12th Century, the village was transferred from the Abbey of St. Gallen to the Counts of Toggenburg. Between 1180 and 1195 Diethelm VI. married Guta of Rapperswil and received as dowry the county of Uznach and a rose from the crest of Rapperswil. From their castle in Uznach, the Toggenburgs raided trade caravans from Zurich until 1268 when the castle was conquered and destroyed by Rudolf von Habsburg.

Following the extinction of the Toggenburg line in 1436, the Old Zürich War war broke out between the canton of Zürich and the other seven cantons of the Old Swiss Confederacy over the Toggenburg inheritance. The war lasted from 1436 until 1450 and ended with Zurich being brought back into the Confederation.

In 1529, a Reformation preacher was arrested in Uznach by Schwyz troops. This led to the outbreak of the First war of Kappel. Two years later the Second war of Kappel broke out and Uznach was again attacked by Zurich.[3]

The blazon of the municipal coat of arms is Gules a Rose Argent barbed seeded slipped and leaved Vert.[5]

In 2000[update] there were 532 persons (or 9.9% of the population) who were living alone in a private dwelling. There were 1,078 (or 20.1%) persons who were part of a couple (married or otherwise committed) without children, and 3,240 (or 60.3%) who were part of a couple with children. There were 220 (or 4.1%) people who lived in single parent home, while there are 26 persons who were adult children living with one or both parents, 27 persons who lived in a household made up of relatives, 33 who lived household made up of unrelated persons,and 213 who are either institutionalized or live in another type of collective housing.[7]

In Uznach about 62.6% of the population (between age 25-64) have completed either non-mandatory upper secondary education or additional higher education (either university or a Fachhochschule).[4] Out of the total population in Uznach, as of 2000[update], the highest education level completed by 1,184 people (22.1% of the population) was Primary, while 1,773 (33.0%) have completed their secondary education, 483 (9.0%) have attended a Tertiary school, and 334 (6.2%) are not in school. The remainder did not answer this question.[7]