Matricaria is a genus of flowering plants in the sunflower family (Asteraceae). Some of the species have the common name of "mayweed," but this name also refers to plants not in this genus.

Most are very common in the temperate regions of Europe, Asia, and America, as well as in northern and southern Africa, and some are naturalised in Australia. M. occidentalis is native to North America; other species have been introduced there.

These are hardy, pleasantly aromatic annuals, growing along roadsides in ruderal communities and in fallow land rich in nutrients. Though many are considered nuisance weeds, they are suitable for rock gardens and herb gardens, and as border plants.

Their many-branched stems are prostrate to erect, glabrous, and very leafy. Their bipinnate leaves have numerous linear, narrowly lobed leaflets.

The flowers are radially symmetrical. The greenish-yellow capitula are semi-spherical. The white ray florets can be present (M. recutita) or lacking (M. discoidea). The disc florets are 4- to 5-dentate. The receptacle is 2–3 times as high as wide. The pappus may be crown-shaped and short, or lacking.

Matricaria species are used as food plants by the larvae of some Lepidoptera species (caterpillars) including Lime-speck Pug.

The extract of German chamomile (M. recutita) is taken as a strong tea. It has been used in herbal medicine as a carminative and anti-inflammatory. It is also used in ointments and lotions, and as a mouthwash against infections of mouth and gums. Aromatherapy uses two essential oils of chamomile: the "true chamomile" oil (or German chamomile oil, from M. recutita) and the Roman chamomile oil (from Anthemis nobilis). 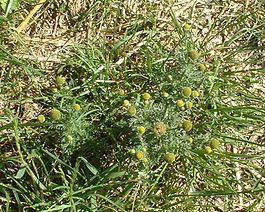 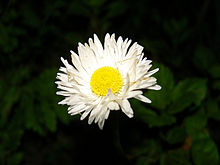