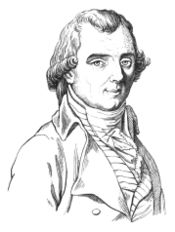 Phaeton (or Phaëton, less often Phaethon) is the name of a hypothetical planet posited to once have existed between the orbits of Mars and Jupiter whose destruction supposedly led to the formation of the asteroid belt. The hypothetical planet was named for Phaëton, the son of the sun god Helios in Greek mythology, who attempted to drive his father's solar chariot for a day with disastrous results and was ultimately destroyed by Zeus.

According to the now-discredited Titius–Bode law, a planet was believed to exist between Mars and Jupiter. Johann Elert Bode himself urged a search for the fifth planet. When Ceres, the largest of the asteroids in the asteroid belt (now considered a dwarf planet), was found in 1801 at the predicted position of the fifth planet, many believed it was the missing planet. However, in 1802 astronomer Heinrich Wilhelm Matthäus Olbers discovered and named another object in the same general orbit as Ceres, the asteroid Pallas.

Olbers proposed that these new discoveries were the fragments of a disrupted planet that had formerly revolved around the sun. He also predicted that more of these pieces would be found. The discovery of the asteroid Juno by Karl Ludwig Harding and Vesta by Olbers buttressed the Olbers hypothesis.

Theories regarding the formation of the asteroid belt from the destruction of a hypothetical fifth planet are today collectively referred to as the "disruption theory". This theory states that there was once a major planetary member of the solar system circulating in the present gap between Mars and Jupiter, which was variously destroyed when:

In the twentieth century, Russian meteoriticist Yevgeny Leonidovich Krinov (involved in the investigation of the Tunguska event), suggested that the exploded planet in the Olbers theory be named Phaeton after the story in Greek myth.

Today, the Phaeton hypothesis has been superseded by the accretion model.[citation needed] Most astronomers today believe that the asteroids in the main belt are remnants of the protoplanetary disk, and in this region the incorporation of protoplanetary remnants into the planets was prevented by large gravitational perturbations induced by Jupiter during the formative period of the solar system.

The hypothesis continues to be advocated by some non-scientists. One notable proponent is Zecharia Sitchin, who has proposed, based on his reading of ancient Sumerian mythology, that the planet known to the Sumerians as Tiamat was destroyed by a rogue planet known as Nibiru. However, his work is widely regarded as pseudoscience.

In 1988, Donald W. Patten wrote a book entitled Catastrophism and the Old Testament outlining the theory that a planet he called Astra overtook Mars and, upon reaching the Roche limit, broke apart much like the comet Shoemaker-Levy 9 did when it reached Jupiter's Roche limit in 1994.[citation needed]

In UFO and channelling related sources, and in the Ascended Master Teachings, a group of religions based on Theosophy, Phaeton is referred to as Maldek.[1]