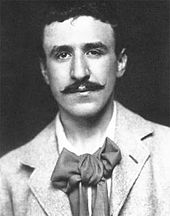 Charles Rennie Mackintosh (7 June 1868 – 10 December 1928) was a Scottish architect, designer, watercolourist and artist. He was a designer in the Arts and Crafts movement and also the main representative of Art Nouveau in the United Kingdom. He had a considerable influence on European design. He was born in Glasgow and he died in London. 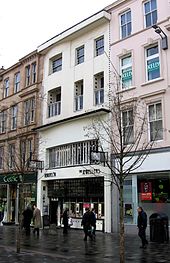 Charles Rennie Mackintosh was born at 70 Parson Street, Glasgow on 7 June 1868 as the fourth out of eleven children and the second son to William McIntosh and Margaret McIntosh. The young Charles attended Reid's Public School and the Allan Glen's Institution.[1][2] In 1890 Mackintosh was the second winner of the Alexander Thomson Travelling Studentship, set up for the "furtherance of the study of ancient classic architecture, with special reference to the principles illustrated in Mr. Thomson’s works."[3] Upon his return, he resumed with the Honeyman and Keppie architectural practice where he commenced his first grand architectural project, the Glasgow Herald Building, in 1899.

Charles Rennie Mackintosh met fellow artist Margaret MacDonald at the Glasgow School of Art. Members of the collaborative group known as “The Four”, the two married in 1900. After several successful building designs, Mackintosh became a partner of Honeyman and Keppie in 1907 his last major architectural commission. When economic hardships were causing many architectural practices to close, he resigned from Honeyman and Keppie in 1913 and attempted to open his own practice. Unable to sustain his office, Mackintosh and his wife took an extended holiday in Suffolk where he created many floral watercolours. Upon return a year later, the Mackintoshes moved to London where Charles continued to paint and create textile designs. In 1916, Mackintosh received a commission to redesign the home of W.J. Bassett-Lowke. This undertaking would be his last architectural and interior design project.

Due to financial hardship, the Mackintoshes moved in 1923 to Port-Vendres,[4] a Mediterranean coastal town in southern France with a warm climate that was a comparably cheaper location in which to live. During this peaceful phase of his life, Charles Rennie Mackintosh created a large portfolio of architecture and landscape watercolour paintings. The couple remained in France for two years, before being forced to return to London in 1927 due to illness.

That year, Charles Rennie Mackintosh was diagnosed with throat and tongue cancer. A brief recovery prompted him to leave the hospital and convalesce at home for a few months. Necessity resulted in Mackintosh being admitted to a nursing home where he died on 10 December 1928 at the age of 60. He is buried in Golders Green Crematorium in London.

The Room de Luxe at The Willow Tearooms features furniture and interior design by Mackintosh and Margaret Macdonald.

He lived most of his life in the city of Glasgow. Located on the banks of the River Clyde, during the Industrial Revolution, the city had one of the greatest production centres of heavy engineering and shipbuilding in the world. As the city grew and prospered, a faster response to the high demand for consumer goods and arts was necessary. Industrialized, mass-produced items started to gain popularity. Along with the Industrial Revolution, Asian style and emerging modernist ideas also influenced Mackintosh's designs. When the Japanese isolationist regime softened, they opened themselves to globalization resulting in notable Japanese influence around the world. Glasgow’s link with the eastern country became particularly close with shipyards building at the River Clyde being exposed to Japanese navy and training engineers. Japanese design became more accessible and gained great popularity. In fact, it became so popular and so incessantly appropriated and reproduced by Western artists, that the Western World's fascination and preoccupation with Japanese art coined the new term, Japonism or Japonisme.

This style was admired by Mackintosh because of: its restraint and economy of means rather than ostentatious accumulation; its simple forms and natural materials rather than elaboration and artifice; the use of texture and light and shadow rather than pattern and ornament. In the old western style furniture was seen as ornament that displayed the wealth of its owner and the value of the piece was established according to the length of time spent creating it. In the Japanese arts furniture and design focused on the quality of the space, which was meant to evoke a calming and organic feeling to the interior. 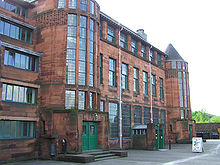 At the same time a new philosophy concerned with creating functional and practical design was emerging throughout Europe: the so-called "modernist ideas". The main concept of the Modernist movement was to develop innovative ideas and new technology: design concerned with the present and the future, rather than with history and tradition. Heavy ornamentation and inherited styles were discarded. Even though Mackintosh became known as the ‘pioneer’ of the movement, his designs were far removed from the bleak utilitarianism of Modernism. His concern was to build around the needs of people: people seen, not as masses, but as individuals who needed not a machine for living in but a work of art. Mackintosh took his inspiration from his Scottish upbringing and blended them with the flourish of Art Nouveau and the simplicity of Japanese forms.

While working in architecture, Charles Rennie Mackintosh developed his own style: a contrast between strong right angles and floral-inspired decorative motifs with subtle curves, e.g. the Mackintosh Rose motif, along with some references to traditional Scottish architecture. The project that helped make his international reputation was the Glasgow School of Art (1897–1909). During the early stages of the Glasgow School of Art Mackintosh also completed the Queen’s Cross Church project in Maryhill, Glasgow. This is considered to be one of Charles Rennie Mackintosh most mysterious projects. It is the only church by the Glasgow born artist to be built and is now the Charles Rennie Mackintosh Society headquarters. Like his contemporary Frank Lloyd Wright, Mackintosh's architectural designs often included extensive specifications for the detailing, decoration, and furnishing of his buildings. The majority if not all of this detailing and significant contributions to his architectural drawings were designed and detailed by his wife Margaret Macdonald [5] whom Charles had met when they both attended the Glasgow School of Art. His work was shown at the Vienna Secession Exhibition in 1900. Mackintosh’s architectural career was a relatively short one, but of significant quality and impact. All his major commissions were between 1896 and 1906, where he designed private homes, commercial buildings, interior renovations and churches. 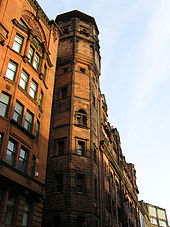 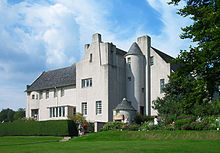 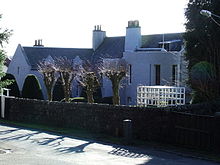 Although moderately popular (for a period) in his native Scotland, most of his more ambitious designs were not built. His designs of various buildings for the 1901 Glasgow International Exhibition were not constructed, neither was his "Haus eines Kunstfreundes" (Art Lover's House) of the same year. He competed in the 1903 design competition for Liverpool Cathedral, but failed to gain a place on the shortlist[6] (the winner was Giles Gilbert Scott).

The House for An Art Lover was built after his death (1989–1996). Mackintosh left many unbuilt designs:

Although Mackintosh's architectural output was fairly small he had a considerable influence on European design. Especially popular in Austria and Germany, Mackintosh's work was highly acclaimed when it was shown at the Vienna Secession Exhibition in 1900. It was also exhibited in Budapest, Munich, Dresden, Venice and Moscow. 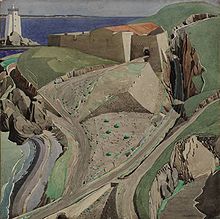 The Fort, c. 1925–1926. Fort Mailly, a ruined 16th century fortification on the outskirts of Port Vendres

Charles Rennie Mackintosh attended evening classes in art at the Glasgow School of Art. It was at these classes that he first met his future wife Margaret MacDonald, her sister Frances MacDonald, and Herbert MacNair who was also a fellow apprentice with Mackintosh at Honeyman and Keppie. MacNair and Frances would also marry. These close companions would later be known as the collaborative group “The Four”, prominent members of the "Glasgow School" movement.

This group of artists exhibited in Glasgow, London and Vienna, and these exhibitions helped establish Mackintosh's reputation. The so-called "Glasgow" style was exhibited in Europe and influenced the Viennese Art Nouveau movement known as Sezessionstil (in English, The Secession) around 1900. Mackintosh also worked in interior design, furniture, textiles and metalwork. Much of this work combines Mackintosh's own designs with those of his wife, whose flowing, floral style complemented his more formal, rectilinear work.

Later in life, disillusioned with architecture, Mackintosh worked largely as a watercolourist, painting numerous landscapes and flower studies (often in collaboration with Margaret, with whose style Mackintosh's own gradually converged) in the Suffolk village of Walberswick (to which the pair moved in 1914), where he was briefly arrested as amid accusations of being a German spy in 1915.[7] By 1923, he had entirely abandoned architecture and design and moved to the south of France with Margaret where he concentrated on watercolour painting. He was interested in the relationships between man-made and naturally occurring landscapes. Many of his paintings depict Port Vendres, a small port near the Spanish border, and the nearby landscapes. 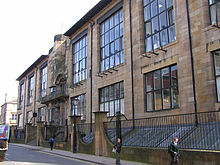 Mackintosh's designs gained in popularity in the decades following his death. His House for an Art Lover was finally built in Glasgow's Bellahouston Park in 1996, and the University of Glasgow (which owns the majority of his watercolour work) rebuilt the interiors of a terraced house Mackintosh had designed, and furnished it with his and Margaret's work (it is part of the University's Hunterian Museum). The Glasgow School of Art building (now renamed "The Mackintosh Building") is regularly cited by architectural critics as among the very finest buildings in the UK. The Charles Rennie Mackintosh Society tries to encourage a greater awareness of the work of Mackintosh as an important architect, artist and designer. The rediscovery of Mackintosh as a significant figure in design is attributed by some to the designation of Glasgow as European City of Culture in 1990,[8] and the exhibition of his work which accompanied the year-long festival. His enduring popularity since then has been fuelled by further exhibitions and the many books and other memorabilia which have illustrated various aspects of his life and work. This revival of public interest in Mackintosh has, in turn, led to the refurbishing and opening of further buildings to the public, such as the Willow Tea Rooms, Glasgow and Derngate, Northampton.

The Metropolitan Museum of Art in New York City held a major retrospective exhibition of Charles Rennie Mackintosh's works from 21 November 1996 to 16 February 1997. In conjunction with that exhibit, there were lectures and a symposium by major scholars, including Pamela Robertson of the Hunterian Art Gallery, Glasgow art gallery owner Roger Billcliffe, and architect J. Stewart Johnson, and screening of documentary films about Mackintosh.[9]

Charles Rennie Mackintosh was to be commemorated on a new series of banknotes issued by the Clydesdale Bank in 2009; his image appeared on the new issue of £100 notes.[10]