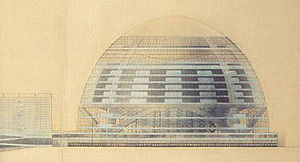 Competition entry for the Palace of the Soviets, 1934 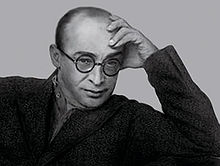 Ginzburg was born in Minsk in a Jewish real estate developer's family. He graduated from Milano Academy (1914) and Riga polytechnic institute (1917). During Russian Civil War he lived in the Crimea, relocating to Moscow in 1921. There, he joined the faculty of VKhUTEMAS and the Institute of Civil Engineers (which eventually merged with Moscow State Technical University).

The founder of the OSA Group (Organisation of Contemporary Architects), which had links with Vladimir Mayakovsky and Osip Brik's LEF Group, he published the book Style and Epoch in 1924, an influential work of architectural theory with similarities to Le Corbusier's Vers une architecture. It was effectively the manifesto of Constructivist Architecture, a style which combined an interest in advanced technology and engineering with socialist ideals. The OSA experimented with forms of Communal apartments to provide for the new Communist way of life. Its magazine SA (Sovremennaya Arkhitektura, or Contemporary Architecture) featured discussions of city planning and communal living, as well as the futuristic projects of Ivan Leonidov. The group was dissolved in the early 1930s into an 'All-Union Association of Architects', along with the competing Modernist group ASNOVA, led by Nikolai Ladovsky, and the proto-Stalinist VOPRA.

The first of these was the Gosstrakh apartments (Malaya Bronnaya Street, Moscow), designed in 1926, one of which was rented by Sergei Tretyakov: these flats were the first employment of Le Corbusier's 'Five Points of Modern Architecture' in the USSR. A similar structure was built to Ginzburg's 1928 design in Sverdlovsk (21, Malysheva Street, completed 1932).

This was followed three years later by the Narkomfin Building, a 'social condenser' which tried to embody socialist and principles in its structure. The apartment blocks were built for employees of the Commissariat of Finance (or 'Narkomfin'), and featured collective facilities, roof gardens and a parkland setting. The Narkomfin building was acknowledged by Le Corbusier as an influence on his Unité d'Habitation, while the layout of its duplex apartments have been copied by Moshe Safdie in his Expo 67 flats, as well as by Denys Lasdun in his luxury flats at St James', London.

In 1928, Ginzburg also designed the Government Building in Alma-Ata (now, University of Alma-Ata), completed in 1931. In early 1930s, he concentrated more on urban planning projects, from utilitarian (Ufa city plan) to utopian (Green City contest entry). He was also a Soviet delegate to the CIAM from 1928 to 1932.

Like other avant-garde artists with limited practical experience, Ginzburg fell out of favor in 1932, when the state took control of architectural profession and steered it in favor of eclectic, revivalist stalinist architecture. Actual demotion of Ginzburg and other constructivists became a gradual process that extended until the end of 1930s. He never returned to Moscow or Leningrad practice, but left a contribution in Crimea and Central Asia and retained his own architectural workshop until his death. His new books on Home (Жилище) and Industrializing housing construction (Индустриализация жилищного строительства) were printed in 1934 and 1937; since 1934, Ginzburg was the editor of an encyclopedic History of Architecture.

In early 1930s, Ginzburg was involved in planning of Crimean Coast, designed a number of resort hotels and sanatoriums; only one of them was built in Kislovodsk (1935-1937). Ginzburg's workshop was also employed by the Ministry of Railways and designed a whole range of model stations for Central Asian and Siberian railroads. Their projects, publicized in late 1930s, are not as bold as the 1920s avant-garde but are definitely modernist in appearance.

In 1940s, Ginzburg produced the reconstruction plan for post-war Sebastopol (never materialized) and designed two resort buildings that were completed in Kislovodsk and Oreanda after his death.

Isometric drawing of The Narkomfin building

His most famous work, the Narkomfin Building, is in a dilapidated state, having been without maintenance for decades, and the is on UNESCO's endangered buildings list. Current draft to rebuild Narkomfin into a hotel (designed by Ginzburg's grandson) is barred by legal uncertainty over the status of the site.

Narkonfin has been the subject of Victor Buchli's study of Soviet material culture, Archaeology of Socialism (Berg, 2000), which traces the building's history from early Utopianism to the harshness of the Stalinist era, up to its current ruined state.