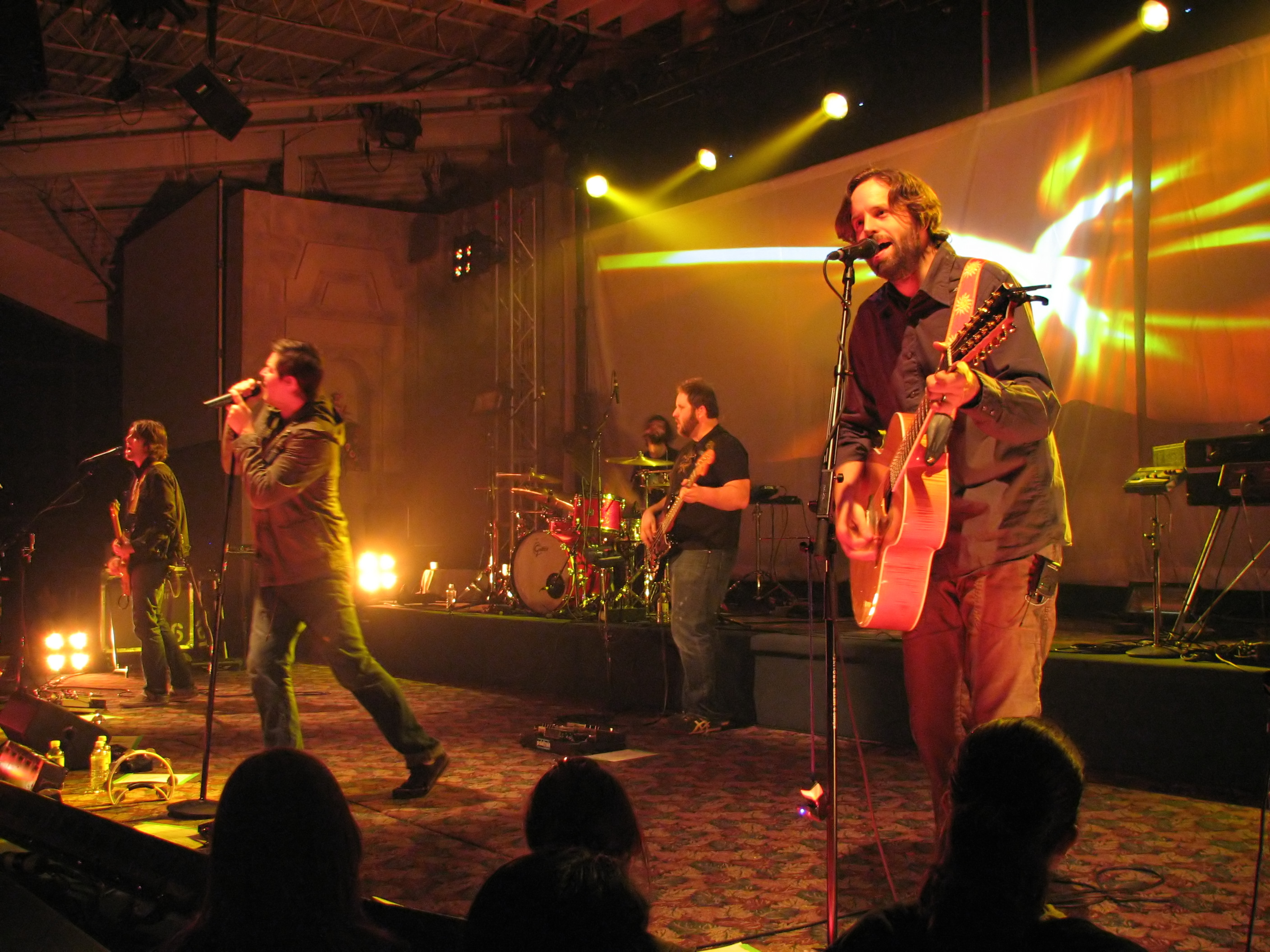 Jars of Clay is a Grammy Award winning band from . They met at in .

Jars of Clay consists of on vocals, on and keyboards, on lead s and on rhythm s. Although the band has no permanent or bassist, Jeremy Lutito and Gabe Ruschival of Disappointed By Candy fill these roles for live concerts. Past tour band members include Aaron Sands, Scott Savage, and Joe Porter. Jars of Clay's style is a blend of , folk, acoustic, and R&B.

The band's name is derived from the New International Version's translation of 4:7:This verse is paraphrased in their song "Four Seven," which appears on "Frail" and as a hidden track on the CD release of their self-titled album.

, Steve Mason and formed Jars of Clay at , in Greenville, in the early 1990s. Dan Haseltine first met Steve Mason after noticing that he was wearing a shirt. Pursuing a career in music together was not necessarily their original goal; some of the first songs they wrote together were for music and recording classes they were taking at the time. Their second joined some time later, and occasionally joined them for some of their early public performances.

In 1994, the band submitted a demo to a talent competition run by the and were selected as finalists. They traveled to to perform and won the contest. Back in Greenville, they self-released a limited-run of the same demo, which they named "", after their song of the same name. The buzz from their performance in Nashville and the demo's popularity resulted in offers from record labels, so the band decided to drop school and move to Nashville. At this time, Bronlewee left the band to finish school and settle down with his fiancée. He was replaced with Matt Odmark, Lowell's childhood friend.

The band toured in support of other Christian acts, such as , and aside mainstream acts like , , and Sting. This resulted in a small from conservative Christian groups. [cite web | last=Lutes | first=Chris |title= Faith Under Fire| url=http://www.christianitytoday.com/cl/7c5/7c5016.html | accessdate= 2008-03-23] The band released a Christmas EP entitled "" at the end of 1995. The EP was re-released in 1997 with a slightly different track listing on Silvertone. The year 1997 also saw the release of the band's album, "", which was produced by . [cite web |title= Much Afraid Credits| url=http://www.allmusic.com/cg/amg.dll?p=amg&sql=10:3bfqxqyhldfe~T2 | accessdate= 2008-03-23] The album sold very well and went on to earn a Grammy award for "Best Pop/Contemporary Gospel Album".

In 2001, the four members of the band received honorary degrees at . [cite web |title= Jars Of Clay - Jars Of Clay Receive Honorary Diplomas | url=http://www.caaccm.com/artists/artist_news.asp?display=article&artist_id=10&id=99&printer=1 | accessdate= 2008-03-22] However, only three of them, Haseltine, Lowell, and Mason had studied at the college before dropping out in 1994 to move to , while Odmark still received an honorary degree, despite having attended university in . [Jars of Clay. (2005). We Were Becoming One With the Mud. [http://phobos.apple.com/WebObjects/MZStore.woa/wa/viewAlbum?id=87021915&s=143441 iTunes Originals - Jars of Clay] . [AAC Audio] . Essential Records.]

In 2002, the band self-produced and released their fourth album entitled "The Eleventh Hour", which earned the band a Grammy award for the third year in a row. [cite web |title= Jars Of Clay - Jars of Clay Intimately Involved In The Eleventh Hour | url=http://ccm.caa.com/artists/artist_news.asp?display=article&artist_id=10&id=205&printer=0 | accessdate= 2008-03-22] The album relied on studio musicians and the band's touring musicians to fill in for the band's lack of and bass player.

The year 2003 saw the band taking a look back at their career. The double-disc ' features an acoustic disc and a live disc. The acoustic disc consisted of reworked and rearranged fan favorites, two "The Eleventh Hour" s, and a cover of Adam Again's "Dig". [cite web |title= Jars Of Clay - Furthermore-From the Studio: From the Stage | url=http://ccm.caa.com/artists/artist_news.asp?display=article&artist_id=10&id=250&printer=0 | accessdate= 2008-03-22] The latter was actually intended for a tribute album for , who had died recently. The live disc features a recent concert recording that include songs from throughout the band's career. The video of this same concert would later be released via on '.

The band continued the acoustic and organic approach that was featured on "Furthermore" for their fifth studio album entitled "", which released on , . On the album, the band revisited various styles they had used previously, as well as experimenting with new influences, such as gospel, hymns, and Nickel Creek's "newgrass" style.

In early 2005, the band released "", a collection of and traditional songs. The band wrote new melodies to some old hymns and rearranged the music for several others. "", reworked as an acoustic rocker, was a hit for the band on Christian radio. They also covered five hymns from the [http://www.igracemusic.com "Indelible Grace" CD series] (a series which originated from the work of ). [cite web|url=http://www.tollbooth.org/2005/reviews/joc.html|title=Redemption Songs|author=Wray, Burton|date=September 10, 2005] In late 2005, the band announced that the writing process for a new studio album was nearing completion, and that they would be returning to the studio to record the album in the spring. This new project, entitled "", was released on , . Backstage at the 2006 , Jars of Clay labelled the album their first ever rock record. [cite web |title= Jars of Clay 2006 Interview, “Good Monsters” | url=http://www.jesusfreakhideout.com/interviews/JarsOfClay2006.asp | accessdate= 2008-03-22] In the September 2006 edition of , the band credited fellow artist with inspiring the improvisational sound of the album. [cite web |title= Big Monster on Campus| url=http://www.ccmmagazine.com/search/11534414/ | accessdate= 2008-03-23] [Jars of Clay. (2005). A Modern Day Hymn. [http://phobos.apple.com/WebObjects/MZStore.woa/wa/viewAlbum?id=87021915&s=143441 iTunes Originals - Jars of Clay] . [AAC Audio] . Essential Records.] The magazine called it "the most profound album the Christian music community has released in years."

Jars of Clay's song "Flood", from their debut album, was used as the theme song to A&E's 2006 documentary "", which tracked the lives of four young men deciding whether to become priests.

In March 2007, the band announced at a concert in that they were no longer on Essential Records and would now be releasing music independently. Later, press releases announced the name of their label as Gray Matters, which would be a partnership with . [cite web| last=Moring| first= Mark |title= Jars of Yule| url=http://www.christianitytoday.com/music/interviews/2007/jarsofclay-1207.html | accessdate= 2008-03-22] Along with the announcement of their new label, the band mentioned that they are planning to record the soundtrack to Sons of Lwala, a documentary about Milton and Fred Ochieng' - brothers from the African village training to be doctors in the States, working to build a clinic in their home town. [cite web|url=http://www.billboard.com/bbcom/news/article_display.jsp?vnu_content_id=1003599530|title=Jars of Clay Launching Own Label With Nettwerk|publisher=Billboard.com|date=June 15, 2007|author=Price, Deborah Evans] On , , two albums from the band were released simultaneously. The first was a mainstream release of "", which is an EP of live concert recordings of songs that were originally recorded for "Good Monsters". The EP had been previously released through the and through the official Jars of Clay online store. The second album released on this date was a , entitled "", which was released through Essential/Legacy. The band's first release through Gray Matters was a album that was released on , , entitled "Christmas Songs".In Summer of 2007, the song '' was feautered in the pilot of the television show ''

On , , Essential Records released the band's third greatest hits album (the second in the past year), entitled "Greatest Hits".

On , , Grey Matters Records released their latest record exclusively through online digital music stores. It was subsequently released on CD on , .

Lead singer Dan Haseltine visited in 2002, which in turn inspired the founding of , a non-profit organization created to raise awareness and money for the and stricken regions of the continent. [cite web |title= Why We’re Here| url=http://www.bloodwatermission.com/?em1204=43910l | accessdate= 2008-03-22] The name is derived from, as Haseltine says, "The two things Africa needs most" - clean blood and clean water. The mission has begun the 1000 Wells project, an effort to have a thousand new wells built throughout Africa. [cite web |title= What We’re Doing| url=http://www.bloodwatermission.com/?em1204=43911 | accessdate= 2008-03-22]

In a 2002 interview with 's on "Weekend Edition Saturday", responding to a question about the relatively subtle religious content of their music, Haseltine said, "our songs ... [are] not really there to explain our faith," but are "written about our life that is affected by our faith." Haseltine explained the decision to "shy away from ... traditional religious language" as a conscious one, in part to make their music more accessible to those "put off by religion", and to "love people in a way that isn't exclusive to simply people that understand the language of Christianity."

Jars of Clay has released several albums, EPs and special edition versions of a few albums. Various releases (but not all) by the band are:

Jars of Clay has been successful in being nominated for and winning several awards, including prestigious s and several of the Christian music awards, known as the . [cite web |title= Dove Awards| url=http://www.doveawards.com/ | accessdate= 2008-03-22] Some of these successes have been collaborative efforts, including two "" albums and the for the 2005 film "". The group has won five (BMI) awards.