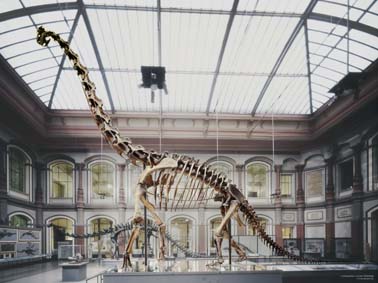 "Brachiosaurus" (pronEng|ˌbrækiəˈsɔrəs), meaning "arm lizard", from the Greek "brachion"/βραχιων meaning "arm" and "sauros"/σαυρος meaning "lizard", was a genus of that lived during the Late Period and possibly the Early Period. It was named thus because its forelimbs were longer than its hind limbs. One of the largest animals known to have walked the earth, it has become one of the most famous of all dinosaurs and is widely recognized worldwide.

"Brachiosaurus" is often considered to be the largest known from a relatively complete fossilized skeleton. However, the most complete specimens, including the "Brachiosaurus" in the of (excavated in Africa, the tallest mounted skeleton in the world), are members of the species "B. brancai" which some scientists consider to be part of a separate , "Giraffatitan". The holotype material of the type species, "B. altithorax". includes a sequence of seven posterior dorsal vertebrae, sacrum, proximal caudal vertebra, coracoid, humerus, femur and ribs: enough from which to estimate size.Based on a complete composite skeleton, "Brachiosaurus" attained 25 s (82 feet) in length and was probably able to raise its head about 13 metres (42 ft) above ground level. Fragmentary material from larger specimens indicates that it could grow 15% longer than this. Such material includes an isolated fibula HMN XV2 1340 cm in length and the brachiosaurid scapulocoracoid referred to "".

The first "Brachiosaurus" was discovered in 1900 by Elmer S. Riggs, in the of western Colorado, in the United States.

In 1988, noted that the African form (on which most popular depictions of "Brachiosaurus" are based) showed significant differences from the North American form ("B. altithorax"), especially in the proportions of its trunk vertebrae and in its more gracile build. Paul used these differences to create a subgenus he named "Brachiosaurus (Giraffatitan) brancai". In 1991, George Olshevsky asserted that these differences are enough to place the African brachiosaurid in its own genus, simply "Giraffatitan". Although this name has frequently appeared on the Internet, it has rarely been used in the scientific literature outside of Paul (1988) and Olshevsky (1991). "B. brancai" has over its shoulder and a rounded crest over its nostrils.

Possibly adding further differences between the two species was the description in 1998 of a North American brachiosaurid skull (Carpenter & Tidwell, 1998). This skull, which had been found nearly a century earlier (it is the skull Marsh used on his early reconstructions of "Brontosaurus"), is identified as "Brachiosaurus" sp." and may well belong to "B. altithorax". The skull is more camarasaur-like than the distinctive high-crested skull of "B. brancai"/"Giraffatitan", so if it does belong to "Brachiosaurus", it would lend a great deal of support to the existence of "Giraffatitan" as a distinct genus.

"B. alataiensis", described by de Lapparent and in 1957 has been referred to the new genus "" (Antunes and Mateus 2003). It is known from back bones (e), and parts of the and limbs, which were recovered in , . It lived about 150 , during the age of the Late period.

"Brachiosaurus" was a , one of a group of four-legged, plant-eating dinosaurs with long s and s and relatively small s. Unlike other families of sauropods, it had a -like build, with long forelimbs and a very long neck. "Brachiosaurus" had "spatulate" (resembling chisels), well-suited to its herbivorous diet. Its skull featured a number of holes, probably aiding weight-reduction. The first on its front foot and the first three toes on its hind feet were ed.

"Brachiosaurus" has traditionally been characterised by its distinctive high-crested skull, though this may have been unique to "B. brancai".

"Brachiosaurus" was one of the largest dinosaurs of the era; it lived on prairies filled with s, and s, and it moved through vast forests and groves of s, and s. Some of its contemporary genera included "", "", "" and "". While it is speculated that groups of "Brachiosaurus" moved in herds, fully grown individuals had little to fear from even the largest predators of the time, "" and "", on account of their sheer size.

"Brachiosaurus" s, like the huge corresponding nasal openings in its skull, were long thought to be located on the top of the head. In past decades, scientists theorized that the animal used its nostrils like a snorkel, spending most of its time submerged in water in order to support its great mass. The current consensus view, however, is that "Brachiosaurus" was a fully . Studies have demonstrated that would have prevented the animal from breathing effectively while submerged and that its feet were too narrow for efficient aquatic use. Furthermore, new studies by Larry Witmer (2001) show that, while the nasal openings in the skull were placed high above the eyes, the nostrils would still have been close to the tip of the snout (a study which also lends support to the idea that the tall "crests" of brachiosaurs supported some sort of fleshy resonating chamber).

A "Brachiosaurus" skeleton is mounted in the B Concourse of ' Terminal One in in , courtesy of the of Chicago. It is a model, not a collection of fossils.

A famous specimen of "Brachiosaurus brancai" mounted in Berlin is one of the largest mounted skeletons in the world. Beginning in 1909, Werner Janensch found many additional "B. brancai" specimens in Tanzania, Africa, including some nearly complete skeletons.