Andrew Tracey, born 5 May 1936, Durban, South Africa,is a South African ethnomusicologist, promoter of
African music,composer, folk singer, band leader, and actor. His father,
Hugh Tracey (1903-1977), pioneered the study of traditionalAfrican music in the 1920s - 1970s, created the
International Library of African Music (ILAM) in 1954, and started the companyAfrican Musical Instruments (AMI) which manufactured the firstcommecial kalimbas in the 1950s. Andrew Traceycontinued and complemented the work of his father Hugh Tracey in a variety ofways. With brother Paul Tracey, he co-wrote and performed in the world musical revue Wait a Minim whichtraveled around the world for seven years. With his father and brother Paul, Andrew wrote the first instructional materials for the Hugh Tracey kalimbaswhich were being sent around the world in the 1960s. Upon his father's death in 1977, Andrew took over his father's role as director of ILAM, which he filled until his retirement in 2005, and his wifeHeather Tracey took over the role of director of AMI until 1999.

Andrew was exposed to African music from an early age as he observed his father's research on Chopi xylophone music at the family home in Durban, attended the traditional African dance performances his father arrangedon Sunday afternoons for the dock workers, and listened to his father'sradio broadcasts which featured traditional African stories and African music. As Hugh Tracey became more devoted to his work on African music, his marriage frayed, and his wife Ursula Campbell Tracey (1910-1987)moved to England with sons Paul and Andrew.Andrew went to Oxford University where he studied anthropology,languages, and informally, folk music. Andrew was especially intrigued by calypso and Brazilian music - rhythmic world music with strong African roots.

Andrew Tracey returned to Africa, first in the British military, but then later came to South Africa to join brother Paul and his father at "The Farm", the property in Krugersdorf outside of Johanesburg where Hugh Tracey started ILAM and AMI. While Paul Tracey oversaw the production of kalimbas at AMI, Andrew began working with his father, seeking to understand and document the musics of south eastern Africa. 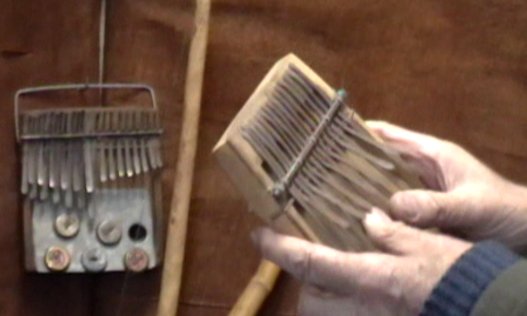 The spiritual center of the African thumb piano world is Zimbabwe. The instrumentthat Hugh Tracey had fallen in love with in when he arrived in Africa in the 1920swas the mbira, a complex 24-note thumb piano used by the Shona people of Zimbabwe. It was a natural homage to this and other related instruments when Hugh and Andrew Tracey helped Robert Sibson found the Kwanongoma College of African Music (now United College of Music), in Bulawayo, Rhodesia (now Zimbabwe) in 1960.Part of Andrew's job in building Kwanongoma was to scout around in the townshipsfor players of traditional instruments who could come and teach at the newcollege. Andrew's big find was Jege Tapera, who played the mbira nyunga nyunga, also known as the karimba. This was the first experience Andrew hadlearning from a traditional player of African music.Without any formal training in ethnomusicology, Andrew wrote several papers on African music for the Journal of African Music, the publication hisfather started as a means of disseminating the results of research atILAM and other institutions about Africa and the world. One of Andrew'searly papers was a description of the mbira music of Jege Tapera.

Starting in 1961, Andrew co-wrote, with Jeremy Taylor and his brother Paul Tracey, the songs for two musical reviews that played in Johanesbergand in Rhodesia. After combining thebest material into a single musical review, Wait a Minim, theyhad a hit on their hands, and they performed in Wait a Minimbetween 1962 and 1968 in South Africa, Rhodesia, England, USA,Canada, New Zealand and Australia, including 461 shows spanningmore than a year on Broadway in New York. With over 50 instruments in the show, many of them African, Andrew Tracey helped educate the world about unique African instruments, including the kalimba.Andrew was on The Tonight Show with Johney Carson a number of times.This musical performance career put Andrew's ethnomusicology research on hold.

When Andrew returned to Africa in 1969, he quickly got back tohis research on Afican music, carrying on as an associate at ILAM under his father. His field research centered on Zimbabwe, Mozambique, Malawi, Zambia, Uganda, South Africa, and Namibia, focused on the playing technique of members of the mbira and xylophone families. A highlight of Andrew'sresearch was the identification of the lower course oftines on the karimba (ie, Jege Tapera's mbira nyunga nyunga)as the logical ancestor of essentially all mbiras. Those eight notes can be traced through every mbira and karimba played inthe Zambezi Valley, and those eight notes form the core of all kalimbamusic in that region, which is considered to be the birthplace of themetal-tined kalimba about 1300 years ago. Andrew Tracey asserts that the first written account of the kalimba by Portugese missionary Father Dos Santos, in Mozambique in 1589, was in essense these eight notes. Other instruments, such asthe mbira, or the modern karimba (mbira nyunga nyunga), are based on thoseeight notes, with other notes and other courses of notes having been added over the centuries. While it is impossible to say when those eight notesfirst started appearing in kalimbas, Andrew's work convincesthat the note layout of the karimba is truly ancient and gave rise to all other kalimbas in the region.

In the 1980s Andrew made a design for a 17-note karimba, based on Tapera's 15-note instrument, using the same hardware as the Hugh Tracey treble kalimba, and AMI began selling it as the African Tuned Karimba.

While Andrew's seven year stint performing in a Broadway musical did not leaveany time for ethnomusicological research, Andrew's studies at ILAMdid allow him to perform. In 1969 when he returned to Africa, he startedthe Andrew Tracey Steel Pan Band, which performed around Grahamstownand South Africa and in festivals such as the National Arts Festivalin Grahamstown until 2007.

Andrew as Director of ILAM

When father Hugh Tracey died in 1977, Andrew Tracey took over his job and became Director of ILAM and editor of the Journal of African Music, roles he filed until his retirement in 2005. Andrew's wife Heather took overAfrican Musical Instruments (AMI), the maker of the Hugh Tracey Kalimbas.In 1977, apartheid South Africa was seen internationally as a pariah state,and funding for ILAM dried up. Andrew was able to arrange support forILAM from Rhodes University in Grahamstown, South Africa,which resulted in both ILAM and AMI moving from Krugersdorp to Grahamstown. 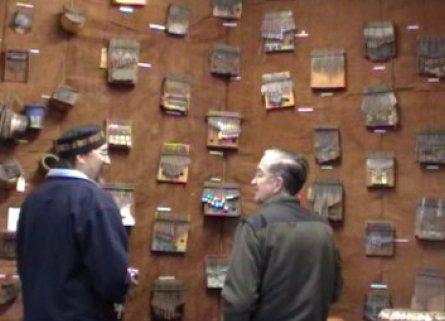 thumb|right|Andrew Tracey standing in his old office at ILAM withauthor Mark Holdaway, discussing the mbiras and karimbas on the wall.

During the 28 years Andrew headed ILAM, he lectured on African music at Universities in South Africa, Zimbabwe, USA, Germany, Portugal, for various schools and societies, TV & radio. He received his own honorary doctorate in ethnomusicology from the University of Natal in Durban in1995. David Dargie, a Catholic priest, trained in ethnomusicology underAndrew and obtained a doctorate from Rhodes Unversity in 1986.David used this training to help the Xhosa people of South Africa take pride in their own traditional music, and he pushed to include traditional African music in Catholic mass.

Andrew Tracey retired from ILAM in 2005, but still lives in Grahamstown,South Africa, where he is a well respected and active member of thecommunity.