Mustafa Bülent Ecevit (Turkish: [byˈlent edʒeˈvit]; 28 May 1925– 5 November 2006) was a Turkish politician, poet, writer and journalist, who was the leader of Republican People's Party (CHP), later of the Democratic Left Party (DSP) and four-time Prime Minister of Turkey.

Born in Ankara, Ecevit's father was Ahmet Fahri Ecevit who was born in Kastamonu and was a professor of forensic medicine at Ankara University. Later Ahmet Fahri started his political life as CHP's Kastamonu deputy between 1943-1950. His mother, Fatma Nazlı, was born in Istanbul and was among the first women in Turkey to paint professionally.[1] In 1944, Ecevit graduated from Robert College in Istanbul and later from the University of London's School of Oriental and African Studies,[2] and then started working as a translator in the Press Publication Head Office (Basın Yayın Genel Müdürlüğü). He married his classmate Rahşan Aral in 1946. He went to the United States in the mid–1950s on a State Department fellowship, and worked at two newspapers in North Carolina.[1]

His paternal grandfather's name was Kürtzade (son of Kurd) Mustafa Şükrü Efendi[3][4][5][6] and Ecevit has said Maybe I am a Kurdish ancestry.[7][8]

Ecevit was elected into the Turkish parliament for the first time in 1957. He was a Member of the Parliament between 1960 and 1961. Ecevit served as the Minister of Labour between 1961 and 1965, contributing to the acceptance of the right to strike and collective agreement. In 1966 he became the secretary general of the Republican People's Party (Turkish: Cumhuriyet Halk Partisi, CHP). In 1971 he resigned from the post as a protest to the party decision to support the transitional government established by a military intervention.

In 1972, he succeeded İsmet İnönü as the leader of the party and became Prime Minister in a coalition with the National Salvation Party of Necmettin Erbakan. This government is most noted for ordering Turkish invasion of Cyprus on July 20, 1974. The landing ended in August 1974, when Turkish troops occupied 37% of the island's territory, which was followed by the establishment of a de facto state Turkish Republic of Northern Cyprus in 1983.

Bülent Ecevit recalls that he learned for the first time of the existence of Operation Gladio, a secret "stay-behind" NATO army, in 1974, and has suspected "Counter-Guerrilla", the Turkish branch of Gladio, of being responsible for the May 1, 1977 Taksim Square massacre in Istanbul, during which snipers shot on a protest rally of 500,000 citizens, killing 38 and injuring hundreds. CHP defeated AP at the 1977 general elections by gathering 41% of the votes. This victory was just after the events of May 1 and the victory of CHP was seen as the answer of the left wing of Turkish politics.

Following the 1980 coup led by General Kenan Evren, Ecevit was incarcerated and suspended from active politics for life along with the other political leaders of the time. A referendum in 1987 lifted his ban from politics, and he became the chairman of the Democratic Left Party (Turkish: Demokratik Sol Parti, DSP), inheriting the position from his wife, Rahşan Ecevit. His party failed to enter the National Assembly at the 1987 national elections, and in spite of passing the electoral barrier in 1991 managed to win only 7 seats in parliament. DSP's fortunes changed after the 1995 elections, when the party won 75 seats (out of 550). After two short-lived governments (formed by Mesut Yılmaz and Necmettin Erbakan, respectively), Ecevit became a deputy prime minister in the last government of Mesut Yılmaz. In 1998-99 he was briefly the caretaker Prime Minister in the run-up to the 1999 general elections. In those elections - also helped by the fact that Abdullah Öcalan, head of the separatist (PKK) was apprehended in Kenya and flown to Turkey during this period - Ecevit's party gained the largest number of seats, leading to Ecevit's final term as Prime Minister in a coalition with the Motherland Party (Turkish: Anavatan Partisi, ANAP) of Mesut Yılmaz and the Nationalist Movement Party (Turkish: Milliyetçi Hareket Partisi, MHP) of Devlet Bahçeli.

Bülent Ecevit with George W. Bush at the White House in Washington, D.C.

Ecevit's government undertook a number of reforms aimed at stabilizing the Turkish economy in preparation for accession negotiations with the European Union. However, the short-term economic pain brought on by the reforms caused rifts within his coalition and party, and eventually forced new elections in 2002. Ecevit, at this time visibly frail, was unsuccessful in leading his party back into the National Assembly. Ecevit subsequently retired from active politics in 2004.

Bülent Ecevit was not only a politician but also a poet and a writer. He studied Sanskrit, Bengali, and English at the University of London's School of Oriental and African Studies,[2] and translated works by Rabindranath Tagore, T. S. Eliot, and Bernard Lewis into Turkish. Ecevit, who also studied at the American Robert College, one of the most prestigious high schools in Istanbul, was successful in these literary endeavors despite never having graduated from a university, a fact that also prevented him from ever running for the Presidency of the Turkish Republic. 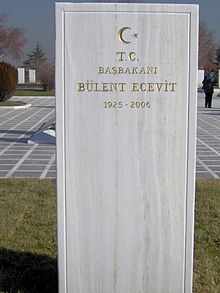 Ecevit's tomb at the State Cemetery in Ankara, Turkey.

Ecevit was hospitalized at the Gülhane Military Hospital in Ankara and placed in a medically-induced coma after suffering a cerebral hemorrhage on May 18, 2006.[9] He died on November 5, 2006 at 20:40 (UTC) due to respiratory failure without regaining consciousness. He was laid to rest in the Turkish State Cemetery (Turkish: Devlet Mezarlığı) in Ankara with a state funeral on November 11, 2006. The funeral was attended by approximately 1,000,000 people from all 81 provinces.[10]