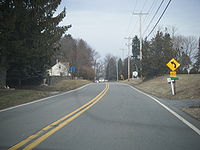 CR 514 begins at an intersection with US 202/Route 31 in East Amwell Township, Hunterdon County, heading northeast on two-lane undivided Old York Road. West of US 202/Route 31, Old York Road becomes Route 179. A short distance after beginning, the road becomes the border between Raritan Township to the northwest and East Anwell Township to the southeast, pasing through a mix of farmland and homes. The route reaches the residential community of Reaville, where CR 514 splits from Old York Road and heads northeast onto Reaville-Clover Hill Road, with CR 613 continuing along Old York Road. The road comes to a junction with CR 609 before running east through more areas of agriculture and housing developments.[1][2] 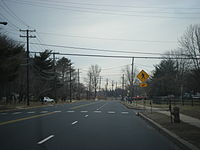 CR 514 continues east into Hillsborough Township in Somerset County and becomes Amwell Road, passing farms before continuing into more wooded areas with some agriculture and residences. The road enters woodland as it reaches an intersection with the southern terminus of CR 567. The route passes through more areas of farms and woods before heading into wooded areas of residential development and coming to the CR 677 junction. At this point, CR 514 becomes Amwell Road Bypass and runs through woodland, before passing more residential subdivisions and widening to four lanes as it comes to CR 625. The route continues east as Amwell Road again to the US 206 junction, at which point it narrows back to two lanes. The road passes housing developments to the north and fields to the south prior to passing over CSX's Trenton Subdivision. The route continues through farms, woods, and homes before reaching the CR 650 junction, at which point CR 514 turns northeast and enters Millstone. The road bypasses the community to the north by passing through woodland and fields, turning east and intersecting CR 533 Bypass and CR 533.[1][2]

The route crosses the Millstone River into Franklin Township and passes over the Delaware and Raritan Canal in forested areas. From this point, CR 514 continues through more farmland and woodland, intersecting CR 621 before turning north and coming to the CR 619 junction. At this point, the route turns east again and enters residential surroundings, intersecting CR 615, where it turns east-southeast and widens to four lanes. The road becomes Hamilton Street and heads into the community of Somerset. Here, the route begins to curve to the east-northeast as it comes to the CR 617 intersection, narrowing back to two lanes. Following this junction, the road passes through a mix of homes and businesses.[1][2] 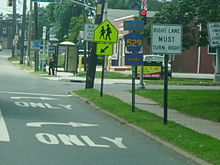 Upon crossing Mile Run Stream, CR 514 enters New Brunswick in Middlesex County and passes through more residential and commercial development as it comes to an intersection with CR 527. At this point, the route turns southeast to form a concurrency with CR 527 on Easton Avenue, heading into the commercial downtown of New Brunswick and passing under Amtrak's Northeast Corridor near the New Brunswick Station before intersecting Route 27. Here, CR 514 and CR 527 form a concurrency with Route 27, heading east along four-lane divided Albany Street. About 200 yards (180 m) later, the road crosses George Street, which heads to the north as CR 672 and to the south as Route 171. CR 527 splits from Albany Street by heading south on Route 171 while Route 27 and CR 514 continue east, interchanging with Route 18 a quarter of a mile later. After the Route 18 interchange, the road crosses the Raritan River on the Albany Street Bridge into Highland Park. Upon entering Highland Park, Route 27/CR 514 becomes two-lane Raritan Avenue, intersecting CR 622 and continuing through the downtown area of Highland Park. CR 514 splits from Route 27 by heading east on Woodbridge Avenue, passing businesses. Upon entering Edison, CR 676 briefly joins the route before it widens into a four-lane divided highway and interchanges with US 1. Following this, the road becomes two lanes and undivided again as it comes to the CR 529 junction and passes through residential areas.[1][2]

CR 514 widens into a four-lane divided highway and passes over the New Jersey Turnpike (I-95) before coming to an intersection with CR 667. Past this intersection, the route turns northeast and passes Middlesex County College before running between residential areas to the northwest and commercial areas to the southeast. The road crosses a Conrail Shared Assets Operations railroad line and intersects CR 531, making a turn to the east. CR 514 turns northeast past more commercial development and intersects Raritan Center Parkway before coming to an interchange complex that has access to the New Jersey Turnpike and Route 440, I-287. Following this interchange, the route becomes undivided again and passes more businesses, crossing CR 501. The road narrows to two lanes at this point and continues into residential areas as it enters Woodbridge Township, where the name of the road becomes Main Street. CR 514 passes over both the New Jersey Turnpike and the Garden State Parkway simultaneously before heading into business areas as a four-lane road and reaching an interchange with US 9. Here, the road becomes two lanes again and passes homes before heading into the commercial dowtown of Woodbridge at the Route 35 intersection. CR 514 passes under New Jersey Transit's North Jersey Coast Line near the Woodbridge Station prior to intersecting CR 652 and turning north onto Rahway Avenue. The road heads northeast through a mix of residences and businesses, with CR 604 joining the road for a short distance. The route crosses a Conrail Shared Assets Operations line prior to intersecting CR 650. Farther north, CR 514 crosses another railroad branch and heads through industrial areas to the east of East Jersey State Prison.[1][2]

CR 514 continues into Rahway in Union County and becomes Lawrence Avenue, intersecting CR 621 and passes a few homes before crossing the Rahway River and intersects the southbound direction of US 1/9, with northbound US 1/9 passing over CR 514. From this point, the road continues past more residences, intersecting CR 608. At the CR 613 junction, the route turns northwest onto East Grand Avenue and passes under the Northeast Corridor. CR 514 turns northeast onto Elizabeth Avenue, with CR 613 resuming along West Grand Avenue, and heads through residential and commercial areas a short distance to the northwest of the Northeast Corridor as it crosses CR 652. The route enters Linden and heads past industry as it crosses an abandoned railroad branch. The road intersects CR 615 and passes businesses as it comes to CR 617. CR 514 passes more homes and commercial establishments, intersecting CR 619 and crossing under an abandoned railroad line. The road runs through more urban areas of businesses and industry as it reaches the CR 616 junction. CR 514 continues into Elizabeth and passes homes on Fay Avenue as it reaches it eastern terminus at the Route 439 intersection.[1][2]

Prior to the 600-series county route designations, CR 514 in Middlesex County was designated as County Route 1R2.[3]