The Aztecs compete in NCAA Division I (FBS for football). Its primary conference is the Mountain West Conference. The women's water polo team participates in the Mountain Pacific Sports Federation. The men's soccer team participates as an associate member of the Pacific-12 Conference (or "Pac-12"). The crew team is a member of the Western Intercollegiate Rowing Association (WIRA).

News reports (especially on local radio) often mention "Montezuma Mesa" or "news from the mesa" when discussing San Diego State-related sports events. The San Diego State campus is known as "Montezuma Mesa", as the university is situated on a mesa overlooking Mission Valley and is located at the intersection of Montezuma Road and College Avenue in the city of San Diego.

"The mission of the San Diego State University Department of Intercollegiate Athletics Team is to provide student-athletes the finest educational and athletic experience. We develop the leaders of tomorrow by instilling the core values and work ethic that inspires a passion for success in the classroom, on the field of competition, in the community, and in all future endeavors."

The school colors are scarlet (red), black and Gold.

NOTE: In 1969, San Diego State left the NCAA College Division and moved into the University Division, now known as Division I

One of the team stars was Chris Marlowe. 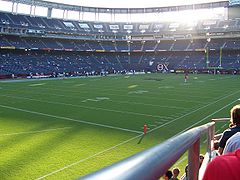 San Diego State University's football team is part of the highest level of American collegiate football, NCAA "Football Bowl Subdivision" of Division 1 (which was formerly known as Division 1 A). Until the 2010 season, the Aztec football team had not won a bowl game in the past 37 years.[3] In his second year as head coach, Brady Hoke led the team to an 8-4 record in the 2010 regular season and a win in the 2010 Poinsettia Bowl, before accepting the Head Coaching job at the University of Michigan.

Some of the more famous San Diego State students to later star in the NFL are:

San Diego State has both men's and women's college basketball teams. Some of the more famous San Diego State students to later star in the NBA and WNBA are:

Other Aztecs basketball alumni who became more famous outside the sport are 1930s player Art Linkletter, who went on to an illustrious entertainment career that spanned more than 70 years, and Tony Gwynn, who also played baseball at San Diego State and opted for that sport professionally, ending up in the Hall of Fame.

The team has had moderate success since Fisher was hired as head coach. The Aztecs won the Mountain West Conference basketball tournament in 2002, 2006, 2010, and 2011 earning automatic bids to the NCAA basketball tournament. The Aztecs were also the regular season Mountain West champions in 2006. On March 19, 2007, a new National Invitation Tournament (NIT) attendance record was set, at 26,752, in a loss in the second-round men's basketball game against Syracuse. They also made the MWC Tournament Finals in 2009, losing the Championship to the Utah Utes, 52-50.

After being overlooked by the NCAA Selection Committee for the 2009 tournament, the Aztecs went on to win the first three rounds of the National Invitational Tournament. With a win against St. Mary's in the tournament's quarter finals the 2008-09 team set a school record for wins in a single season with 26.[5]

In the 2010–2011 Season, the Men's team had a phenomenal record of 32-2 to capture a share of the Mountain West Conference title, and winning the Conference Tournament outright for the automatic berth to the 2011 NCAA basketball tournament. The only losses of the regular season were to another top 10 ranked team, BYU, who the Aztecs beat to win the tournament. They earned a 2nd seed in the National Championship Tournament.

Some of the more famous San Diego State students to later star in MLB are:

Some of the more famous San Diego State students soccer stars are:

In 1987, the San Diego State men's soccer team lost in the NCAA Men's Soccer Championship finals by a score of 0-2 to Clemson.

See: Hall of fame and footnote[6]

San Diego State's athletic teams are nicknamed "Aztecs", and its current mascot is the Aztec Warrior, historically referred to as "Monty - Montezuma".[7]

Hail Montezuma
We with loyal hearts our homage pay:
Proud working and glorying,
In the spirit of the Aztec name.
To thee, San Diego
And the fond Traditions old and new
A tribute raise of lasting praise and steadfast faith,
Hail Montezuma.

Hail Montezuma
We salute thy glorious destiny:
Far seeing in company days,
Men and women strong who live in truth.
To thee, San Diego
And the Black and Scarlet we'll be true
An echo comes from Aztec drums through all the years,
Hail Montezuma!

Fight on and on ye Aztec men,
Sons of Montezuma,
We will win again,
Keep your spirits high,
Never bow a knee,
We will fight till victory.

Fight on and on ye Aztec men,
Proudly raise your banners high,
For it's the Red and Black,
Hail to our team,
San Diego Aztecs fight!

The Show is the loud and vocal student section at men's basketball games. They are known for heckling visiting teams and taunting them with the large celebrity faces. Shownana, a student dressed in a banana costume, has become a celebrity at games.

The San Diego State Marching Aztecs, and Pep and Varsity Bands are often seen at many sporting events including Football, Basketball and even Volleyball.