listen) (born 22 April 1957) is a Polish politician who has been Prime Minister of Poland since 2007. He was a co-founder and is chairman of the Civic Platform (Platforma Obywatelska) party.

Tusk was officially designated as Prime Minister on 9 November 2007 and took office on 16 November. His cabinet won a vote of confidence in the Sejm on 24 November 2007. He is currently the longest serving prime minister of the Third Republic of Poland. In October 2011, Tusk's Civic Platform won a plurality of seats in the Polish parliamentary election, meaning that Tusk became the first Prime Minister to be re-elected since the fall of communism in Poland.[1]

Tusk began his public career as an activist in his home town of Gdansk, supporting Solidarity and organizing his fellow university students. With the exception of one four-year stretch, Tusk has served in the Third Republic parliament almost continuously since its first elections in 1991. He was Vice Marshal (deputy speaker) of the Senate from 1997 to 2001 and Vice Marshal of the Sejm from 2001 to 2005. He also served as Leader of the Opposition from 2003 to 2007.

Donald Tusk belongs to the Kashubian minority in Poland. In an interview with the Israeli newspaper Haaretz in December 2008, Tusk compared his own family history to the Jewish experience, describing the Kashubian minority as a people who, "like the Jews, are people who were born and live in border areas and were suspected by the Nazis and by the Communists of being disloyal".[4]

Tusk graduated from the Mikołaj Kopernik (Nicolaus Copernicus) High School in Gdańsk in 1976. He then enrolled as a student of history at the University of Gdańsk, from which he graduated in 1980 under professor Roman Wapiński with an M.A. thesis on Józef Piłsudski.

Student activism and Solidarity in Gdansk

At the beginning of the Solidarity era, Tusk was involved in student politics in Gdansk. He helped found the Solidarity Student Committee at the university, and later the local Independent Students Association. This positioned him at the forefront of student politics in 1980, and he was influential in founding the Independent Students Union (NZS), the Solidarity affiliate, that year. He became a journalist, involved with pro-Solidarity organs like Samorzadnosc, as well as and Kashubian publications. He collaborated with the Free Trade Unions of the Coastal Region as well as Kashubian leader Lech Bądkowski. Tusk's activities blacklisted him from at employment at state-operated firms under the Communist government, so Tusk spent seven years working at the Swietlik co-operative.

Early years of the Third Republic

Tusk was one of the founders of the Liberal Democratic Congress (Kongres Liberalno-Demokratyczny), and become its president in 1991. In this party – which backed free markets, European integration, and privatization of state industry – one can see the consistency with the political platform Tusk backs today. In the 1991 elections, the KLD won 8% of the vote and 37 seats in the Sejm with the slogan, "Neither the right nor the left, just straight to Europe." Tusk was one of the candidates, making him a member of the First Sejm of the Third Polish Republic. Conservative parties formed a loose coalition in the Sejm, and KLD member Jan Krzysztof Bielecki became prime minister. Tusk did not enter the government. Tusk was involved in the so-called Nocna Zmiana change of government during the night of 4–5 June 1992.

Bielecki's government soon fell, and KLD stayed in opposition until Hanna Suchocka became prime minister in 1992. Suchocka's government quickly became unpopular, and KLD's popularity fell with it. In the 1993 elections, the party received only 4%, under the threshold and keeping it out of the Sejm for the next term. Tusk lost his seat as well and would be out of Parliament until 1997.

In 1994, the KLD merged with the Democratic Union (Unia Demokratyczna) to become the Freedom Union (Unia Wolności, UW). Tusk became vice-chairman of the new party. Tusk was elected to the Senate in the next election in 1997, with his UW party supporting the Solidarity (AWS) government of Jerzy Buzek. He served as deputy speaker of the Senate in that term.

Civic Platform and the 21st century

In the run-up to the 2001 elections, Tusk lost a leadership campaign in the UW party to Bronislaw Geremek. With the party in disarray and the previous parliament's AWS/Solidarity coalition breaking apart, Tusk, Andrzej Olechowski, and Maciej Plazynski founded Civic Platform (PO), taking many party members with him. The party would win 65 seats in that year's election, becoming the largest single opposition party. Tusk became deputy speaker of the Sejm. While Plazynski was founding chairman of the party, Tusk took over in 2003, and has been leader every since. (The Freedom Union party won no seats. It later changed its name to the Democratic Party.) 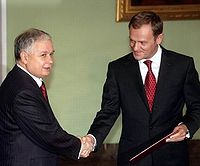 Tusk and his Civic Platform party emerged victorious in the 2007 parliamentary election, defeating incumbent Prime Minister Jarosław Kaczyński‘s Law and Justice party. The Civic Platform’s electoral victory also pushed Law and Justice’s junior coalition partners, the League of Polish Families and Self-Defense of the Republic of Poland out of the Sejm altogether. Following the election, Tusk engaged in coalition talks with the Polish People's Party, emerging with a solid working parliamentary majority. On 9 November, President Lech Kaczyński, who had defeated Tusk in 2005’s presidential election, asked Tusk to form a government. Tusk and his assembled cabinet were sworn in on 16 November, becoming the fourteenth prime minister of the Third Republic.[5] Tusk and his newly-assembled cabinet survived a vote of confidence in the Sejm several days later on 24 November. In the 2011 parliamentary election, Civic Platform retained its place as Poland's most popular party.

In his government’s domestic policy, Tusk has pursued the continuation of free-market policies, streamlining the bureaucracy, enacting long-term stable governance, cutting taxes to attract greater foreign business ventures, luring foreign-working Poles back to Poland, and privatizing state-owned companies.[6] The construction of a more adequate and larger national road network in preparation for the UEFA 2012 football championships has been a stated priority for the Tusk government.[7]

On 27 October 2009, Tusk declared that he wants to partially outlaw gambling.[8] There are some concerns on Internet censorship, as Tusk wants to ban Internet gambling and monitor Internet connections and money transfers.

During the 2009 swine flu pandemic, Tusk defended his government's decision not to purchase swine flu vaccine, citing the lack of testing by pharmaceutical companies and its unavailability to be purchased freely through the market. Tusk criticized other nations' responses to the pandemic. "The eagerness of some countries seems to be excessive and disproportionate to the real epidemiological situation", Tusk stated, referring to the pandemic's relatively low fatality rate.[9] The government's decision drew harsh responses from opposition members in the Sejm.

In continental policy, Tusk has strongly supported greater political and economic integration within the European Union, strongly backing the implementation of the Lisbon Treaty, standing in stark contrast to President Lech Kaczyński's vehement opposition.[10] Tusk has repeatedly stated his government’s intention in bringing Poland into the Eurozone. Originally wanting to introduce the euro by 2012, Tusk currently envisions 2015 as "a realistic and not overly-ambitious goal".[11]

In foreign policy, Tusk has sought to improve relations severely damaged during the previous Kaczyński government, particularly with Germany and Russia. While criticizing the words of German politician Erika Steinbach with regard to her opinion over the expulsion of Germans from Poland following World War II, Tusk has stressed the need for warm relations with Berlin.[12] Tusk has also advocated a more realistic relationship with Moscow, especially in regards to energy policy.[12] Under Tusk’s premiership, Russian bans on Polish meat and agricultural products have been lifted, while Poland reversed its official policy of disagreement on a European Union-Russian partnership agreement.[13]

Donald Tusk with President of Russia Dmitry Medvedev in 2010

During a speech delivered to the Sejm in the first weeks of his premiership, Tusk outlined a proposal to withdraw military units from Iraq, stating that "we will conduct this operation keeping in mind that our commitment to our ally, the United States, has been lived up to and exceeded".[14] The last Polish military units completed their withdrawal in October 2008.[15]

In regards to U.S. plans of hosting missile defense shield bases in the country, Tusk hinted skepticism toward the project, saying that their presence could potentially increase security risks from Russia, and rejected U.S. offers in early July 2008.[16] By August, however, Tusk relented, and supported the missile shield, declaring: "We have achieved the main goal. It means our countries, Poland and the United States will be more secure."[17] Following President Barack Obama's decision to scrap and revise missile defense strategy, Tusk described the move as "a chance to strengthen Polish-US co-operation in defense..." He said: "I took this declaration from President Obama very seriously and with great satisfaction."[18] Tusk later supported a smaller and more mobile defense strategy equipped with short-range missiles and fewer personnel.

In his premiership, Tusk has proposed various reforms to the Polish constitution. In 2009, Tusk proposed changes to the power of the presidency, by abolishing the presidential veto. "The president should not have veto power. People make their decision in elections and then state institutions should not be in conflict", said Tusk.[20] Tusk again reiterated his desire for constitutional reform in February 2010, proposing that the presidential veto be overridden by a simple parliamentary majority rather than through a three-fifths vote. "Presidential veto could not effectively block the will of the majority in parliament, which won elections and formed the government", stated Tusk.[21] Further constitutional reforms proposed by Tusk include reducing the Sejm from a membership of 460 to 300, "not only because of its savings, but also the excessive number of members' causes blurring certain plans and projects".[21] Similarly, Tusk proposed radical changes to the Senate, preferring to abolish the upper house altogether, yet due to constitutional concerns and demands from the junior coalition Polish People's Party partner, Tusk proposed reducing the Senate from 100 to 49, while including former presidents to sit in the Senate for political experience and expertise in state matters.[21] Parliamentary immunity for all members of the Sejm and Senate would also be stripped, except for in special situations.[21] In addition, Tusk proposed that the prime minister's role in foreign policy decisions would be greatly expanded.[22] By decreasing the president's role in governance, executive power would further be concentrated in the prime minister, directly responsible to the cabinet and Sejm, as well as avoiding confusion over Poland's representation at international or EU summits.[23] The opposition conservative Law and Justice party deeply criticized Tusk's constitutional reform proposals, opting in opposing legislation for the presidency to garner greater power over the prime minister.[24]

In an interview with the Financial Times in January 2010, Tusk was asked if he considered running again as Civic Platform's candidate for that year's presidential election. Tusk replied that although the presidential election typically drew the most voters to the polls and remained Poland's most high-profiled race, the presidency had little political power outside of the veto, and preferred to remain as prime minister. While not formally excluding his candidacy, Tusk declared that "I would very much like to continue to work in the government and Civic Platform, because that seems to me to be the key element in ensuring success in the civilisational race in which we are engaged".[25] A day after the interview, Tusk formally announced his intention of staying as prime minister, allowing his party to choose another candidate.[26] 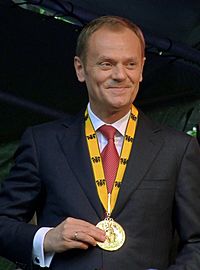 The Karlspreis of the city of Aachen was awarded to Tusk, who is fluent in German, on 13 May 2010 for his merits in the further unification of Europe and for his role as a "patriot and great European". He dedicated the prize to the people killed in a plane crash of a Polish Air Force Tu-154 in April 2010 including the Polish president Lech Kaczyński. The eulogy was given by German chancellor Angela Merkel.[27]