Coat of arms of Germany

Coat of arms of Germany

The coat of arms of Germany displays a black eagle (the Bundesadler "Federal Eagle", formerly Reichsadler "Imperial Eagle") on a yellow shield (Or, an eagle displayed sable). It is a re-introduction of the coat of arms of the Weimar Republic (in use 1919–1935) adopted by the Federal Republic of Germany in 1950.[1] The current official design is due to Tobias Schwab (1887–1967) and was introduced in 1928.

The Weimar Republic had re-introduced the medieval coat of arms of the Holy Roman Emperors, in use during the 13th and 14th centuries, before the emperors adopted the double-headed eagle, beginning with Sigismund of Luxemburg in 1433. The single-headed Imperial Eagle (on a white background, Argent, an eagle displayed sable) had also been used by the German Empire during 1889–1918, based on the earlier coat of arms of Prussia.

The German Reichsadler (Imperial Eagle) dates back to the time of Charlemagne, the first Frankish ruler to be crowned emperor by the pope (AD 800), ultimately derived from the eagle standard of the Roman army.

By the 13th century, the black eagle icon on a gold field was generally recognised as the imperial coat of arms. During the medieval period, the imperial eagle was mostly single-headed. A double-headed eagle is attributed to Frederick II in the Chronica Majora (ca. 1250). In 1433 the double-headed eagle was adopted by the Holy Roman Emperor Sigismund. Since then the double-headed eagle came to be used as the symbol of the German emperor, and hence as the coat of arms of the Holy Roman Empire of the German Nation. From the 12th century, the Emperors would have a personal coat of arms separate from the imperial one. Starting with Albert II (r. 1438–39), each Emperor bore arms with an inescutcheon of his personal arms on the torso of a two-headed eagle.

Coats of arms of the Holy Roman Empire

In 1815, a German Confederation (Bund) of 39 loosely-united German states was founded on the territory of the former German empire. Until 1848, the confederation did not have a coat of arms of its own. The Federal Diet (Bundestag) meeting at Frankfurt am Main used a seal which carried the emblem of the Austrian Empire, since Austria had taken over the union's leadership. It showed a black, double-headed eagle, which Austria had adopted just before the dissolution of the Holy Roman Empire of the German Nation.
During the 1848 revolution, a new Reich coat of arms was adopted by the German National Assembly that convened in St. Paul's Church in Frankfurt. The black double-headed eagle was retained, but without the four symbols of the emperor: the sword, the imperial orb, the sceptre and the crown. The eagle rested on a golden shield; above was a five-pointed golden star. On both sides the shield was flanked by two flags with the colours black-red-gold. The emblem, however, never gained general acceptance. The coat of arms itself was the result of a decision of the federal assembly:

The Reichsadler had already been introduced at the Proclamation of Versailles, although the first version had been only a provisional one. The design of the eagle had been altered at least twice during the German Empire (1871–1918). It shows the imperial eagle, a realistic black eagle, with the crown of the Holy Roman Empire. The eagle has a red head and claws, with open wings and feathers, but only one head, looking to the right.This is in contrast to its predecessor, the eagle of the German Confederation, because it symoblised that important parts of the old empire, Austria and Bohemia, were not part of this new empire. Its legal basis was an imperial rescript:

To the Imperial Chancellor Prince of Bismarck. Following your report of June 27 of this year I authorize: 1. that public authorities and public servants, appointed by the Emperor according the requirements of the constitution and the laws of the German Empire, are to be called imperial; 2. that the black, one-headed, rightward-looking eagle with red beak, tongue and claws, without scepter and orb, on the breast shield the Prussian eagle, overlaid with the shield of the House of Hohenzollern, over the same the crown in the form of the crown of Charlemagne, but with two crossing bows, may be brought into use; 3. that the Imperial standard [Script continues]
—Kaiser Wilhelm, Rescript of August third, 1871, concerning the names of the public authorities and public servants of the German Empire, as well as the declaration of the Imperial coat of arms and the Imperial standard 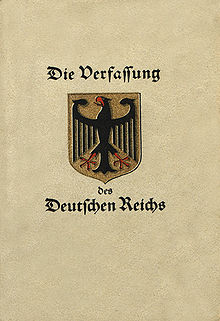 Title page of the Constitution of the Weimar Republic, with Schwab's design of the coat of arms

After the introduction of the republic also the coat of arms of Germany was altered accounting for the political changes. The Weimar Republic (1918–1933), retained the Reichsadler without the symbols of the former Monarchy (Crown, Collar, Breast shield with the Prussian Arms). This left the black eagle with one head, facing to the right, with open wings but closed feathers, with a red beak, tongue and claws and white highlighting.

The republican Reichsadler is based on the Reichsadler introduced by the Paulskirche Constitution of 1849, which was decided by the German National Assembly in Frankfurt upon Main, at the peak of the German civic movement demanding parliamentary participation and the unification of the German states. The achievements and signs of this movement had been mostly done away after its downfall and the political reaction in the 1850s. Only the tiny German Principality of Waldeck-Pyrmont upheld the tradition and continued to use the German colours called Schwarz-Rot-Gold in German (English: Black-Red-Or).

These signs had remained symbols of the Paulskirche movement and Weimar Germany wanted to express its view of being also originated in that political movement between 1848 and 1852. The republican coat of arms took up the idea of the German crest established by the Paulskirche movement, using the same charge animal, an eagle, in the same colours (black, red and or), but modernising its form, including a reduction of the heads from two to one. The artistic rendition of the eagle was very realistic. This eagle is mounted on a yellow (golden) shield. The coat of arms was announced in 1919 by the President Friedrich Ebert and Interior Minister Erich Koch-Weser:

By reason of a decision of the Reich's Government I hereby announce, that the Imperial coat of arms on a gold-yellow shield shows the one headed black eagle, the head turned to the right, the wings open but with closed feathering, beak, tongue and claws in red color. If the Reich's Eagle is shown without a frame, the same charge and colors as those of the eagle of the Reich's coat of arms are to be used, but the tops of the feathers are directed outside. The patterns kept by the Federal Ministry of the Interior are decisive for the heraldic design. The artistic design may be varied for each special purpose.
— President Ebert; Minister of the Interior, Koch, Announcement concerning the federal coat of arms and the imperial eagle of November 11, 1919[4]

However, in 1928 the Reichswappen (Reich's coat of arms) designed by Tobias Schwab (1887–1967) in 1926 [or 1924[5]] for the German Olympic team became the official emblem.[6][7][8] The Reichswehr adopted the new Reichswappen already in 1927.[8] Emil Doepler's earlier design then became the Reichsschild (Reich's escutcheon) with restricted use such as pennant for government vehicles. The 1949 Federal Republic of Germany adopted all three signs of Weimar Republic, Reichswappen, Reichsschild and Reichsflagge as Bundeswappen, Bundesschild and Bundesflagge in the 1950s.[8]

Adolf Hitler came to power in 1933, but the Weimar eagle was retained until 1935. The Nazi Party used a rather aggressively styled black eagle above a highly stylised oak wreath, with a swastika at its centre. When the eagle is looking to its left shoulder, it symbolises the Nazi party, and was therefore called the Parteiadler. After 1935 the Nazis introduced their party symbol as the national insignia (Hoheitszeichen) as well. This version symbolises the country (Reich), and was therefore called the Reichsadler. It can be distinguished from the Parteiadler because the eagle is looking to its right shoulder. The emblem was established by a regulation made by Adolf Hitler, November 1, 1935:

To express the unity of party and state in relation to their emblems too, I decide:
Article 1 The empire holds as emblem of its nationality the national emblem of the National Socialist German Workers Party.
Article 2 The national emblems of the Wehrmacht remain intact.
Article 3 The announcement concerning the imperial coat of arms and the imperial eagle (Reichsgesetzbl. Pg 1877) is cancelled.
Article 4 In agreement with the Representative of the Führer, the Imperial Minister of the Interior will enact the regulations necessary to implement article 1.
—The Führer and Reich Chancellor Adolf Hitler (and others) , Regulation concerning the national emblem of the empire of November 5, 1935

Main article: Coat of arms of the German Democratic Republic

The German Democratic Republic (East Germany) used a socialist insignia from 1950 until its reunification with West Germany in 1990. In 1959 the insigna was also added to the flag of East Germany.

The Federal Republic of Germany adopted the Weimar eagle as its symbol in 1950. Since then it has been known as the Bundesadler ("federal eagle"). The legal basis of the use of this coat of arms is the announcement by President Theodor Heuss, Chancellor Konrad Adenauer and Interior Minister Gustav Heinemann of January 20, 1950, which is word for word identical to the announcement by President Friedrich Ebert and Interior Minister Erich Koch-Weser by November 11, 1919:

Since the accession in 1990 of the states that used to form the German Democratic Republic, the Federal Eagle has been the state symbol of the reunified Germany.

Official depictions of the eagle can be found not only in the federal coat of arms but also on the federal institutions flag, the standard of the President of Germany and official seals. These are designs by various artists of the Weimar period and differ primarily in the shape and position of the wings. A large and rather plump version of the eagle decorates the chamber of the Bundestag, the German parliament; it is sometimes called Fette Henne ("Fat Hen"), with a similar representation found on the German Euro coin. In addition to the official depictions, artistic renderings of the federal eagle are permitted and have found their way onto coins, stamps and the letterhead of federal authorities. The eagle logo now used by the federal institutions was designed by Rayan Abdullah.[year needed][12]