Devon Avenue (pronounced /dɨˈvɒn/) is a major east-west thoroughfare in the Chicago metropolitan area. It begins at Chicago's Sheridan Road, which borders Lake Michigan, and it runs west until merging with Higgins Road near O'Hare International Airport. Devon continues on the opposite side of the airport and runs intermittently through Chicago's northwestern suburbs. In the northwest suburbs west of O'Hare Airport, Devon Avenue is the boundary between Cook and DuPage counties. The street is located at 6400 N in Chicago's address system. 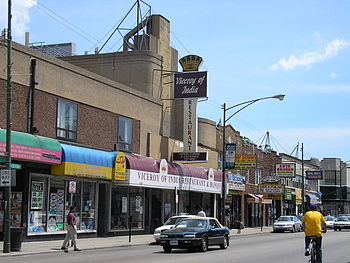 The organization "Friends of Refugees of Eastern Europe" (better known as "F.R.E.E. of Chicago") is headquartered in the Orthodox-Jewish section of Devon.[4] As a result, most Soviet/CIS immigrants of Jewish ancestry settled around this area upon arrival in Chicago. After acclimation, these residents would tend to move to the north suburbs (especially Skokie and Buffalo Grove). Because the vast majority of Jews residing in the former Soviet Union have emigrated since its collapse, the vibrancy of this particular area of Devon is not as apparent as it was in the 1970s, 1980s, and early 1990s (which were periods of mass emigration). Nevertheless, a significant proportion of these immigrants, especially the elderly, have remained on Devon.

Devon's Desi corridor is one of the best-known and largest communities of its kind in North America. It exists mainly on Devon between Ravenswood Ave. and California Ave. South Asian shops, restaurants and grocery stores abound along this strip, and it has become a popular tourist destination. Vivek Mukherjee of Rediff.com writes, "There are similar desi markets in New Jersey, at the famous Oak Tree Road or in the Bay Area, but nothing like Devon Street. [...] Devon Street's sidewalks are even speckled with the paan stains".[5]